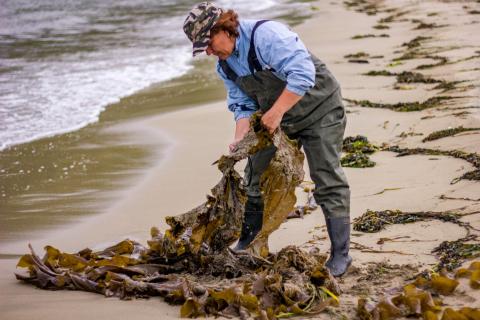 Scotland could be missing out on a booming new industry that surrounds our shores. The harvesting of seaweed is a growing economic feature of coastal states, but production in Europe is dwarfed by Asia. The EU, Norway and the UK together produce only around 300,000 tons of seaweed products every year, less than 1% of global production. It is an industry that was first recorded in Europe in the 17th century, where seaweed was used for the production of glass in France and Norway. Now, seaweed is commonly used in novel foods and food additives, animal feeds, pharmaceuticals, cosmetics, clothes and construction materials and energy. But even though Scottish coasts are rich with seaweed and kelp, the three countries that dominate the industry in Europe are Norway (58%), France (17%), and Ireland (10%) and in most cases the companies involved are young, inexperienced and have few employees.

It is a major lost opportunity for Scotland. Employment opportunities in remote coastal areas are few and far between. The fishing industry has seen massive job losses in recent years, with Scotland’s fleet more than halved in size, as fish stocks dwindled and tough quotas and decommissioning schemes took their toll. Scotland’s burgeoning aquaculture sector has filled some of the gap, providing direct employment to more than 2,500 people, with thousands of additional jobs in support industries. Farming, tourism and the onshore and offshore renewable energy sector are also valuable providers of skilled jobs in rural Scotland. But few of our business entrepreneurs seem to have realised the potential for integrating seaweed harvesting and production with many of these existing industries, in a way that could stop the steady decline in rural job opportunities.

The European Commission has just published its ‘Blue Bioeconomy Report’, which singles out how seaweed can transform regional economies. Although Brexit has severed our ties with the Commission, we can learn some valuable lessons from their report. For example, in Brittany, oyster farmers have discovered how seaweed production helps to protect oysters against rising water acidity and eutrophication, the process where harmful algal blooms can create dead zones, killing fish and other species. The oysters in return release minerals and other nutrients beneficial for the growth of the seaweed. The resulting synergy boosts both the oyster and the seaweed crop.

In Denmark, they are using seaweed farming to filter waste-water from fish farms, purifying the water while also producing high-quality seaweed. In the Netherlands, a company has developed breakwater lines of cultivated seaweed to help prevent coastal erosion. Seaweed’s contribution to carbon capture and storage has seen it hailed as a perfect ‘carbon sink’ in the fight against climate change and in Portugal, local communities are being encouraged to replant seaweed to restore coastal ecosystems. In Belgium, offshore wind turbines are being used to automate the growth and harvest of seaweed, with seaweed farms being created between the turbines. It has been found that kelp and seaweed forests also provide a rich habitat for marine life, providing food and shelter for small aquatic animals and fish.

As the global demand for seaweed steadily rises, Scotland’s coasts can provide a ready-made solution to livelihoods and biodiversity. Our abundant kelp and seaweed forests, if sustainably managed, can form the basis for a burgeoning new economic bonanza. Traditionally, wild harvesting of seaweed in Scotland, or harvesting by hand, has hampered the sector’s growth. Countries with stronger seaweed economies, like Norway, France, and Ireland, have increasingly turned towards mechanical harvesting to increase yields. Mechanised harvesting coupled with careful re-seeding and cultivation of seaweed, could provide an economic windfall, unlocking Scotland’s coastal goldmine.