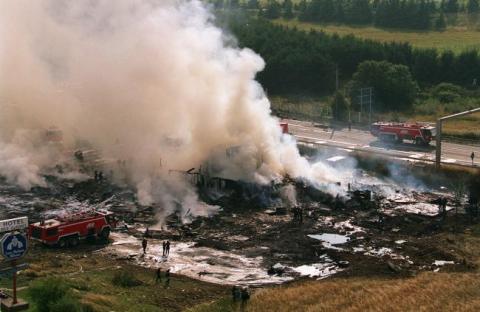 THE END OF CONCORDE

Twenty years ago today, Air France flight 4590 crashed in flames as it attempted to take off from Charles De Gaulle Airport (CDG) in Paris, killing everyone on board and several others on the ground. It was the beginning of the end for the West’s first supersonic airliner. The Concorde that crashed that day was one of 13 Anglo-French supersonic jets in operation around the world at the time, seven with British Airways and six with Air France. Back in 2000, Concorde was queen of the skies, the ultimate status symbol for the rich and famous, keen to reach New York from Paris or London in less than three and a half hours. But on 25thJuly 2000, entire families were wiped out in a devastating fireball.

The iconic grainy film of the disaster that featured on TV news bulletins around the world, was shot by the wife of a Spanish truck driver. They were driving past CDG and knew that Concorde was about to take off at any moment. They parked on the roadside and the woman set her video camera on record, capturing the horrifying spectacle as the stricken jet hurtled down the runway with flames billowing from underneath its wings.

On Concorde’s flight deck, Captain Christian Marty realised that with only 2km of runway left, he had no option but to continue to take off. The jet struggled to climb as Captain Marty desperately tried to divert to nearby Le Bourget Airport, but it was too late. The fuel tanks exploded and the jet plunged to the ground, totally destroying the Hotelissimo in Gonesse, 8km from CDG. 113 passengers and crew on board were killed. 4 others in the hotel died. The jet was filled with German holidaymakers heading for the trip of a lifetime. They had hoped to join a cruise ship in New York; but first they were looking forward to sipping Champagne and enjoying gourmet food, while their supersonic flight reached Mach-2, or 1,500 mph, twice the speed of sound.

In the suburb of Gonesse, Alice Brooking, a Cambridge University student had just entered her room in the Hotelissimo, when she heard an enormous explosion. She said later that the walls of the hotel caved in and flames were shooting through the crumbling brickwork. She leapt out of her bedroom window and ran for her life, surviving with minor burns. Luckily for Ms. Brooking, her room was at the front of the hotel, while Concorde had smashed into the rear.

The crash led to the immediate grounding of all Concorde aircraft, although they were allowed to resume flights again 15 months later. In the meantime, British Airways investigators announced that they had discovered hairline cracks in the wings of all seven of their Concorde fleet, although this was quickly ruled out as the cause of the disaster at CDG. Air investigators in Paris found that Air France Flight 4590 had in fact been overloaded, but again this was ruled out as a likely cause of the accident. Then the crash investigators unearthed the real culprit. They found that a lump of metal had fallen onto the runway from an earlier Continental Airways plane and it was clear that when Concorde struck this piece of debris, it had punctured a tyre, sending shards of rubber to splinter a fuel tank.

Eight years later, after lengthy court proceedings, French prosecutors filed manslaughter charges against Continental Airlines, which they vigorously contested. Continental was found guilty, fined £170,000 and ordered to pay Air France €1 million. The Continental mechanic, John Taylor, who had fitted the metal strip that fell from the airliner and caused the crash, was fined £1,700 and given a 15-month suspended jail sentence for manslaughter. Both convictions were later quashed by a French Appeal Court, which cleared Continental and John Taylor of criminal responsibility. However, the supersonic jet’s reputation had suffered irreparable damage and the last ever Concorde flight left Heathrow for New York in October 2003. The remaining fleet of sleek, white birds were dispersed to museums around the world.

Ironically, the Russians had also developed a prototype supersonic jet, the Tupolev Tu-144, nicknamed ‘Concordski’, which met a similar fate in 1973, when it crashed during a demonstration flight at the Paris air show, after it had taken off from Le Bourget, the same airport Captain Marty was trying to reach to do an emergency landing. The Tu-144 operated as a passenger jet flying between Moscow and Almaty in Kazakhstan for only 3 years. It was grounded in 1978 following a second crash and used thereafter only for cargo operations, which ended in 1999. Nevertheless, the Tu-144 claimed the record of the first ever supersonic flight, on 5th June 1969, four months ahead of Concorde.

One of the British Airways Concorde fleet eventually found its way to the National Museum of Flight in East Fortune, near Edinburgh. Golf-Bravo Oscar Alpha Alpha was the first supersonic jet to go into service for BA in 1976. She safely concluded 8,064 flights and ended her days in East Fortune after ignominiously being transported from London to Scotland by barge! But Scotland’s association with Concorde goes deeper. In the early seventies, the supersonic jet frequently used Prestwick Airport in Ayrshire for testing purposes, attracting large crowds who watched in wonder as the legendary droop-nosed airliner performed low passes and mock landings. Concorde flew into Edinburgh Airport for the last time on 24thOctober 2003.

It is perhaps fitting that the direct descendant of Concorde was revealed at the Paris Air Show back in June 2011. EADS, the parent company of Airbus, unveiled its Zehst concept plane. The Zero Emission Hypersonic Transportation aircraft is designed to fly at a mind-blowing mach-4.5 or four and a half times the speed of sound. EADS say it will carry 100 passengers and crew at a cruising speed of 3,125 MPH, flying six miles above the earth. If it took Concorde three and a half hours from London to New York, Zehst will do it in one hour! BOEING are also working on a hypersonic jet they claim will travel at five times the speed of sound, while a Colorado-based company called BOOM Supersonic, say they will have a fuel efficient, quieter, 55-seater jet capable of reaching Mach 2.2 in the air by 2023. On the twentieth anniversary of the tragic Concorde crash, maybe it’s time to go from supersonic bust to boom.