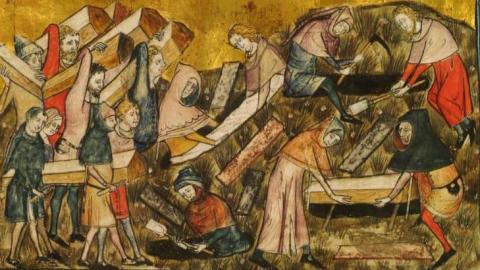 PANDEMICS AND THE LESSONS OF HISTORY

Georg Wilhelm Friedrich Hegel, the German philosopher, said:  “We learn from history that we do not learn from history.” When examining the history of global pandemics his words ring true. Pericles, one of the most influential statesmen in ancient Greece, who led Athens to fame and fortune and counts the Acropolis and the Parthenon amongst his architectural and cultural legacy, died of the plague in 429 BC. The plague, believed to be typhus or typhoid fever, raged through the city, killing a third of the population, including Pericles’ two sons. Athens never recovered its grandeur. As a populist political leader, Pericles was helpless in the face of this sudden onslaught of illness. His failure to stem the spread of the epidemic led to widespread protests and public uproar, reactions that became familiar as global pandemics struck over the centuries.

The Black Death that devastated Europe, Africa and Western Asia between 1348 and 1351, killed an estimated 200 million people. The disease had begun in the Crimea and spread to Sicily in fleas living on black rats. From there it raged across Italy and France, before spreading to the Holy Roman Empire, then on to Denmark, the Baltic States and finally Russia. As with all pandemics, conspiracy theories quickly took root. Almost inevitably, in those days of Christian zealotry,  the Jews were accused of deliberately poisoning wells with the disease and violent attacks on Jewish communities resulted in terrible pogroms and massacres across Europe. In Strasbourg several hundred Jews were publicly burned to death and the Jewish quarter was destroyed. Conspiracy theories arose because many of the Jewish communities chose to take water from their own wells, rather than using city supplies, thus protecting themselves from contagion. This led to suspicions that they must be the source of the epidemic, reminiscent of the modern conspiracy that 5G is the cause of Covid19, as a sort of weird directed energy weapon deployed by malevolent Orwellian tyrants.

Then in 1665 and 1666 London suffered two terrible disasters. 1665 saw the outbreak of the bubonic plague, which killed thousands. In 1666 the Great Fire of London destroyed most of the city centre, but also managed to kill off many of the black rats and fleas that carried the plague bacillus. The bubonic plague was a variant of the black death that had ravaged Europe in the fourteenth century. It was a horrible disease. The victim’s skin turned black in patches and pus-filled swellings erupted across the body. Projectile vomiting, swollen tongues and agonising headaches led to a ghastly death. Scotland too suffered from serious outbreaks of the plague. In the early seventeenth century it struck mainly in the Central Belt, but also in Dumfries, St Andrews, Dundee, Aberdeen and Elgin. Like the coronavirus today, there is little record of the plague affecting the Highlands and Islands. But the Great Plague of 1665-1667, which had devastated London, never reached Scotland, due to preventive measures put in place by the Scottish government at that time. The Privy Council passed a series of acts which forbade trade with countries affected by the plague, in particular England and the Netherlands. Like today, the disruption of trade with two of Scotland’s key trading partners had a massive negative impact on the Scottish economy and there were widespread protests.

By the nineteenth century it was the turn of cholera to cut a swathe through the world’s growing population. Cholera is an infectious gastroenteritis bacterial disease transmitted from human to human by ingesting contaminated water or food. It causes massive diarrhoea and dehydration and can lead to death within hours. Cholera was first reported in Asia around 1830 and spread rapidly through Europe to the British Isles, particularly through major trading ports like Glasgow and Dundee. In 1832, 22,000 people died of the disease in England and 10,000 in Scotland. Again, it was the main, overcrowded cities that suffered the worst outbreaks, with the less densely populated rural areas largely escaping. It was only when piped water and sewers were finally introduced in Scotland’s cities towards the end of the 1890’s, that cholera and other diseases were brought under control.

Once again, the conspiracy theorists flourished. Lacking sound scientific knowledge on the origins of cholera, a sizable group who became known as the miasmatics, insisted that the cause of the disease was a miasma of toxic odours in the atmosphere, caused by rotting vegetation, faeces and other dirt, of which there was a great abundance on the streets at that time. It became fashionable amongst miasmatics to carry small vials of sweet-smelling oils made from rose or musk, which they hoped would ward off the disease. Sadly, their influence on the politicians of the time seriously retarded the construction of sewers and water filtration plants that were the real solution to stopping the spread of disease. They were the anti-vaxers of the day.

Just as the world stumbled towards the end of the bloodiest war in history in 1918, it was struck by the Spanish flu pandemic. This deadly influenza lasted for two years and infected 500 million people. Like the coronavirus today, the disease came in successive waves, killing an estimated 50 million. First reported signs of deaths from Spanish flu were actually in America, but soon it had spread like wildfire across Europe. Sadly, it was young adults, who had just survived the horrors of the trenches, who were hardest hit by the disease, perhaps because of malnourishment, overcrowded medical camps and poor hygiene, all exacerbated by the war.

Like all previous pandemics from the time of Pericles in ancient Greece, our political leaders have been left floundering, torn between saving lives and saving the economy; between closing borders and restricting travel or allowing normal life to resume. The resulting chaos and confusion has been fertile ground for the conspiracy theorists and they in turn have incited public unrest. It has also been fertile ground for the coronavirus. Learning history is easy; learning its lessons seems almost impossibly difficult.