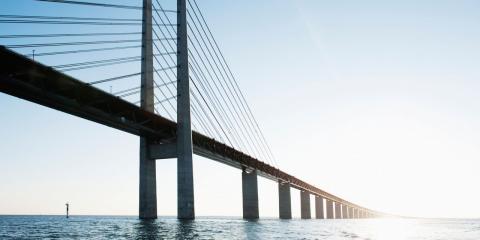 Boris Johnson is not the first British Prime Minister to suggest a physical link between Scotland and Northern Ireland. In 1890, his Victorian Conservative predecessor, Robert Gascoyne-Cecil, 3rd Marquess of Salisbury, was presented with plans for a rail link using either a tunnel, a submerged tubular bridge, or a solid causeway, linking Stranraer and Belfast. Boris’ ambitious plans to build a £20 billion bridge linking Portpatrick in Wigtownshire and Larne in County Antrim, require a little more scrutiny. The proposal would apparently involve a series of undersea tunnels, artificial islands and a combined road/rail bridge. His preferred route is not only the longest crossing of the North Channel, measuring around 28 miles, it also cuts through the infamous 200 to 300 metres deep Beaufort’s Dyke. The shortest crossing would be from Portpatrick to Donaghadee, only 22 miles in length. Donaghadee also has the advantage of being only 14 miles from Belfast, while Larne is 24 miles distant. However, the Donaghadee route would also carve its way through Beaufort’s Dyke.

Beaufort’s Dyke, the thirty miles long and two miles wide trench, remains by far the biggest problem confronting supporters of the Boris Bridge. It is well known that after the Second World War, over one and a half million tonnes of munitions were dumped in the deep undersea trench off the Galloway coast. What is less well documented is the fact that much of the ordnance never found its way into the deep trench at all and is littered across the shallower seabed. Vessels involved in the ordnance disposal were paid on a ‘piecework’ basis. They were loaded with munitions in Cairnryan and ordered to sail to Beaufort’s Dyke, dump their cargo overboard and return for the next load. They quickly realised that they could maximise their profits by short-dumping their loads of bombs, shells and rockets over the side in shallower water, whenever they were out of sight of the Ministry of Defence officials in Cairnryan, allowing a speedy return for another load.

It has also been revealed that drums of deadly chemical weapons captured from the Nazis in 1945, including Sarin, Tabun, mustard gas, phosgene, anthrax and cyanide, were dumped in this area as well. Even more alarmingly, in June 1997, during the public inquiry into the laying of an electricity cable across the North Channel, it was revealed that radioactive waste had systematically been dumped in Beaufort’s Dyke in the 1950’s, containing Caesium-137, Radium-226 and other highly dangerous radionuclides. Some of this waste was thrown overboard in 40-gallon steel drums packed with concrete.

Two undersea films of the Beaufort’s Dyke area were commissioned by the Scottish Office in 1995 and 1996 and examined by a munitions expert employed by Northern Ireland Electricity (NIE). In his evidence to the public inquiry in Ayr, he admitted that he had spotted some steel containers of remarkably similar dimensions to the 40-gallon steel drums, scattered on the seabed. He also claimed that in his estimation there were around 30,000 bombs per square kilometre on the seabed, although he thought it unlikely that any military ordnance would have been armed at the time it was dumped. He told the inquiry in Ayr that “In the past 20 years there has never been any record of underwater explosions occurring.” The MoD quickly scuppered his hypothesis by conceding that some aircraft rockets and other weapons dumped in Beaufort’s Dyke had indeed been armed.

Alarmingly, the British Geological Survey in Edinburgh then claimed that they had monitored eight unexplained explosions in the vicinity of Beaufort’s Dyke, each measuring two on the Richter Scale, around the time a gas pipeline was laid across the North Channel in 1995. The public inquiry was also informed that during the laying of the gas pipeline, over 4,500 incendiary devices had been washed up around the beaches of Dumfries & Galloway, Ayrshire, Argyll & Bute and County Antrim. A child in Campbelltown and an adult in Ballantrae were injured after handling these explosive phosphorous tubes. The inquiry was told of reports of fishermen trawling up phosphorous incendiary bombs in their nets causing fires and explosions on board fishing vessels and even ashore. The MoD confirmed that it had met compensation claims from the owner of the Day Dawn fishing vessel, after nets caught fire as they were winched aboard north of Beaufort’s Dyke. In October 1995 they also paid £9,000 in compensation to the skipper of the Scottish Maid, after fishing nets caught fire on the back of his lorry.

NIE’s munitions expert told the inquiry in Ayr that he had been asked to examine over 100 hours of video film of Beaufort’s Dyke, shot in the Scottish Office undersea survey. He said that much of the film quality was poor, but nevertheless he had been able to identify dozens of metallic canisters, circular metallic plates, metal boxes, metal pipes, wooden crates, and metal cylinders lying on the seabed along the path of the electricity cables. He concluded that there was a strong indication that these objects might “possibly” be munitions. He continued “If left on the seabed, munitions would remain inherently safe. A dangerous situation could only arise if high explosives were to be dragged to the surface and allowed to dry out and crystallize.” He concluded that “explosive materials are negatively buoyant. The only exceptions are phosphorous flares or incendiaries, which can become buoyant if their enclosures become detached. This can happen under impact, disturbance or through deterioration of the enclosure.”

The engineering challenge of linking Scotland and Northern Ireland is not insurmountable. Longer bridges have been built, like the Zhuhai-Macau bridge in China, which has a span of about 30 miles over water. But constructing the Boris Bridge across an area where over one and a half million tonnes of bombs, chemical weapons and incendiary devices have been dumped would be a catastrophic folly, potentially unleashing a lethally dangerous cocktail of radiation, toxic chemicals and high explosives. Literally cementing the link between Northern Ireland and the rest of the United Kingdom is a worthwhile ambition, particularly following the surge in support for the Republican Sinn Fein party on both sides of the Irish Border. But the routes from Portpatrick to Larne or even from Portpatrick to Donaghadee, are simply non-starters.