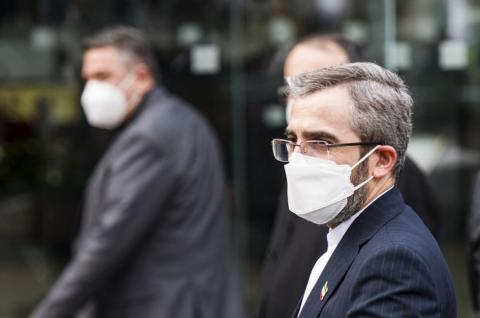 Talks aimed at raising the defunct Iranian nuclear deal from the dead resumed in Vienna on Monday 29th November. In a bid to secure his foreign policy presidential legacy, Barack Obama pushed through the Joint Comprehensive Plan of Action (JCPOA) nuclear deal, which was signed by the US, UK, France, Germany, China and Russia in Vienna on July 14, 2015. It was widely promoted by the US and EU officials as a foreign policy breakthrough. In fact, the deal was a flagrant act of appeasement of the theocratic regime, lifting sanctions and releasing over $150 billion in frozen assets. Ludicrously, Obama even agreed to a demand that military sites inside Iran would be exempted from routine inspections by the International Atomic Energy Agency (IAEA), despite intelligence that indicated much of the nuclear weapons and missile program was being developed in these top-secret military sites. The JCPOA provided a windfall for the clerical dictatorship, enabling it to re-arm its foreign allies and proxies such as Bashar al-Assad in Syria, the Houthi rebels in Yemen, the brutal Shi’ia militias in Iraq, Hamas in Gaza and the terrorist Hezbollah in Lebanon.

Donald Trump decried the nuclear deal with Iran as “the worst deal ever” during his presidential campaign and vowed the US would withdraw from it. As president he fulfilled that election pledge in 2018, restored tough sanctions and even listed the Islamic Revolutionary Guards Corps (IRGC) – the regime’s Gestapo - as a foreign terrorist organization. The IRGC controls almost 90% of the Iranian economy, including its on-going nuclear and ballistic missile program. In retaliation, the mullahs announced that they were accelerating their uranium enrichment platform and boasted that they had enriched uranium to 60% purity, almost weapons grade. Despite this, the Biden administration seems set to cement the flip-flop, by once more appeasing the mullahs, lifting sanctions and re-instating the deeply flawed deal.

The Americans are determined to press on with negotiations even following an “inconclusive” visit to Iran last week by Rafael Grossi, director general of the International Atomic Energy Agency (IAEA). Grossi had sought reassurances over blocks placed on IAEA inspections earlier in the year, as well as answers to questions about undeclared nuclear material in hidden sites in Iran and mistreatment of his inspectors by the Iranian authorities. Grossi said: "In terms of the substance... we were not able to make progress."

The Iranian regime moved thousands of its operational centrifuges to an underground site at Natanz in Isfahan Province, the mullahs’ main nuclear facility. Natanz itself was first revealed to Western intelligence agencies by the People’s Mojahedin Organisation of Iran/Mojahedin e-Khalq (PMOI/MEK), an exiled key opposition group, in 2002; until that point it had been a closely guarded secret by the Iranian regime. Since then, the PMOI/MEK have revealed scores of secret nuclear sites, based on information supplied by the Iranian Resistance, who have a burgeoning presence in towns and cities throughout Iran. Intelligence supplied by the resistance units have proved conclusively that the theocratic regime has never ceased its clandestine efforts to build a nuclear bomb, before, during and after the signing of the JCPOA in 2015.

By acquiring the nuclear bomb and interfering in countries of the Middle East, the ageing and despotic Supreme Leader Ayatollah Ali Khamenei wants to guarantee his grasp on power. He wants to hold world peace and security hostage to gain concessions. In a further act of defiance of the West he has appointed, in a sham election, Ebrahim Raisi, as president of the Islamic republic. Raisi is known as ‘The Butcher of Tehran’ for his involvement in the 1988 massacre of more than 30,000 political prisoners, mostly members and supporters of the PMOI/MEK and for the shooting dead of more than 1,500 protesters during a nationwide uprising in Iran in 2019. The UN Secretary General, António Guterres, has joined Agnès Callamard, Secretary General of Amnesty International, in calling for Raisi to be investigated for crimes against humanity and genocide. Nevertheless, Raisi’s provocative election as president has done little to dent US and EU enthusiasm for further acts of appeasement.

Iran’s Foreign Minister - Hossein Amir-Abdollahian, has demanded the lifting of all sanctions “in a verifiable process” before talks can be resumed in Vienna. “If the opposing sides are prepared to return to their full obligations and the lifting of sanctions, a good and even immediate agreement can be reached,” Amir-Abdollahian said in a telephone conversation with the European Union’s foreign policy chief, Josep Borrell, who is a leading appeaser. Ned Price, a spokesperson for the US State Department, said: “We believe it remains possible to quickly reach and implement an understanding on a mutual return to compliance with the JCPOA by closing the relatively small number of issues that remained outstanding at the end of June.”

It is clear, therefore, that despite complaints on non-cooperation from the IAEA, serial breaches of the JCPOA by the Iranian regime, the election of a hard-line and criminal president by the mullahs and continued brutal repression in Iran and aggressive expansionism abroad, the West seem determined to press on with a revival of the defunct nuclear deal. It will be an historic error and a betrayal of Iran’s 80 million beleaguered citizens who want the overthrow of the regime and a free and democratic society. The Iranian Resistance’s platform is to establish a republic based on the separation of religion and state, free elections, abolition of the death penalty, gender equality, independence of the judiciary, autonomy for ethnic minorities, and a non-nuclear Iran. None of these objectives can ever be achieved under the current tyrannical regime and the lifting of sanctions and renewal of the nuclear deal will simply provide them with a further lifeline to reinforce their oppression and to convince them of the weakness of the West.