YOUNG IRANIANS & IRAQIS WILL NOT BE COWED 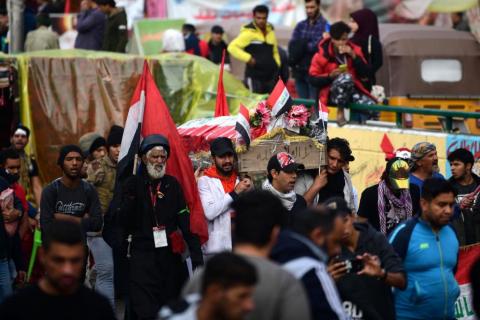 Horror is taking place on the streets of Iran. More than 600, mostly young, protesters have been brutally murdered by the theocratic fascist regime in the past 2 weeks, with more than 4,000 injured and 10,000 arrested. The mullahs are using brute force to try to quell the nationwide uprising, which has erupted in 187 Iranian towns and cities. And yet the UK and EU media have barely mentioned the tragedy unfolding in that beleaguered nation.  Why?

Could it be because the EU media hates to be wrong? For years they have peddled the myth that Iran’s president Hassan Rouhani is some sort of moderate, smiling for the cameras, while holding the line against the hard-core turbaned tyrants. Now they see that Rouhani has authorised the ruthless shoot-to-kill policy being savagely implemented by the regime’s Gestapo, the Islamic Revolutionary Guards Corps (IRGC). They squirm with embarrassment as they hear IRGC thugs are scouring Iran’s hospitals, detaining anyone with bullet wounds.

They may also have noted that since Rouhani took office in 2013 he has presided over the execution of more than 4,000 people, many of them political prisoners, including numerous women and even children. Iran is now the world’s leading per capita executioner under Rouhani’s ‘moderate’ presidency. He has even appointed Alireza Avaie as his Justice Minister. Avaie is a listed terrorist in the West and is notorious for his role as a key executioner of political prisoners during a massacre in 1988, when over 30,000 supporters of the Peoples’ Mojahedin of Iran/Mojahedin e-Khalq (PMOI/MEK) opposition movement were hanged, in batches of over 150 each day, on the orders of Iran’s psychotic Supreme Leader Ayatollah Ruhollah Khomenei.

Maybe the EU media are also embarrassed that they backed the wrong side in the failed nuclear embroglio. They were united in their condemnation of President Trump’s unilateral withdrawal from the so-called JCPOA or Joint Comprehensive Plan of Action, the deal agreed between China, France, Germany, the Russian Federation, the UK and the United States. Brokered by Trump’s predecessor, Barack Obama, the deal was a masterclass in appeasement policy, releasing over $150 billion in frozen assets, enabling the theocratic regime to re-double its funding of Hezbollah in Lebanon, Hamas in Gaza, the Houthi rebels in Yemen, Bashir al-Assad in Syria and the brutal Shi’ia militias in Iraq. Nor did Obama’s deal curb the mullahs’ nuclear ambitions, as evidence emerged of their clandestine programme to accelerate uranium enrichment and missile development in a number of secret sites. The JCPOA was a disastrous policy and the US was well-advised to step away from it.

The European press has also been wrong-footed over Trump’s re-imposition of tough sanctions on Iran. They wailed a chorus of disapproval, complaining that the sanctions would only harm Iran’s 80 million citizens. How humiliating for that editorial line when protesters in Isfahan, Shiraz, Mashhad and Tehran were heard to chant “The enemy is here; they are lying when they say it is America.” Indeed, the current protests raging across the country have taken on a new and uniquely political dimension, with young protesters demanding regime change and calling for the ousting of Supreme Leader Ali Khamenei and president Hassan Rouhani.

The fact that similar protests have continued to rage in neighbouring Iraq has, bizarrely, now caught the attention of the EU press, who have noted the brutal crackdown by security forces since the unrest began in October. More than 400 people have been killed and an estimated 19,000 injured. But the media have once again failed to make the link with Iran. They have failed to notice that the crowds on the streets in Iraq’s cities are chanting “Iran out, out! Iraq will remain free.” The Iraqi people are fed up with the corruption, sectarianism and supine subservience of their government which has allowed the Iranian regime to dominate their political leaders and impoverish their nation.

Recognising the threat to their policy of aggressive expansionism across the Middle East, the Iranian mullahs have sent in the terrorist General Qasem Soleimani to quell the riots in Iraq. Masked and clad in black uniforms, snipers and gunmen from the Hashd-al-Shaabi militia, part of the popular mobilization units funded and controlled by Soleimani and the IRGC, have been instructed to shoot unarmed protesters in the head and chest, deploying the same tactics they have used cold-bloodedly in Iran.

But it now seems clear that the tens of thousands of young protesters in Iraq will not be cowed. They have lost their fear. There is a new awakening about the devastating impact of Iran’s belligerence in their country. Demonstrators are stamping on and vandalising images of Khamenei and Soleimani. The Iranian regime’s flag has been burned in several Iraqi cities.The tide of rage engulfing Iraq has led to the resignation of the Iraqi prime minister Adel Abdul-Mahdi, a corrupt and pliable puppet of the Iranian regime; a major victory for the protesters.

Thousands of young protesters in Iran have also lost their fear. The shoot to kill policy of the theocratic fascist regime has turned a nationwide protest into an uprising that now threatens the mullahs’ existence. Maybe at last the EU press will take notice? Maybe finally they will ditch their policy of appeasement and begin to show their support for the Iranian people.