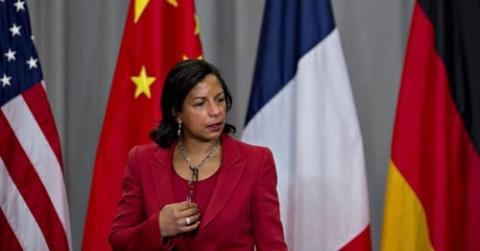 The team around president-elect Joe Biden have made it clear that they want the Biden-Harris Administration to hit the ground running on ‘Day One’. There is growing speculation about who may hold the key roles in Biden’s cabinet. Tipped to be given one of the most important positions will be Susan Rice, former national security advisor to Barak Obama. Rice, 55, served as United States Ambassador to the United Nations from 2009 to 2013. She is now a front-runner to become secretary of state.

Rice is a foreign policy expert. She advised Bill Clinton during his second term, and Michael Dukakis and John Kerry during their 1988 and 2004 White House campaigns. She is a Stanford University graduate, former Oxford University Rhodes Scholar, ex-McKinsey & Company management consultant and Brookings Institution fellow. But she has courted controversy in the past, accused of misleading the American public over the deadly 2012 attacks on the U.S. diplomatic mission and CIA annex in Benghazi, Libya. In a series of TV interviews at the time, she claimed  the attacks had spontaneously erupted from a protest over an anti-Muslim short film, ‘Innocence of Muslims’, although it later became clear that it was actually a premeditated assault by the terrorist group Ansar al-Sharia. It is thought that Joe Biden dropped her as his preferred choice as Vice President because of fears that Donald Trump would exploit the Benghazi controversy. Now it looks like she may take the top job in his cabinet.

Rice previously called on Trump to offer the Iranians a time-limited “suspension” of the United States withdrawal from the Joint Comprehensive Plan of Action (JCPOA) nuclear deal and to allow relief from the tough sanctions imposed by his administration. In a newspaper article Rice stated: “Eliminating the Iranian nuclear threat must be any president’s priority. The Trump administration’s demand that Iran simultaneously halt all its nefarious activities failed utterly, as it sacrificed the nuclear deal and obtained nothing else. Should a renewed nuclear dialogue bear fruit, on a separate track the administration could aim to negotiate restraints on other aspects of Iran’s malign behavior. President Trump’s decision to withdraw from the nuclear deal and impose crippling sanctions, when Iran was in full compliance, was foolish and, predictably, has backfired. But we are where we are. Finding a way to leverage his massive mistakes while demonstrating the will and capacity to climb down is our least bad option.”

President Trump regarded his strategy on Iran as one of the foreign policy successes of his administration. In his final days in office he may try to place legislative obstacles in the way for the Democrats. The US Senate, with a 52-48 Republican majority, (barring any surprises in the January 5 run-off in Georgia) will make it difficult for Joe Biden to restore the nuclear deal in any case. But either way, the incoming administration should be aware of several facts.

Firstly, contrary to Susan Rice’s assertions, Iran was not in full compliance the JCPOA. Indeed, the Iranian regime had never stopped work on its top-secret nuclear program. At a press conference in Washington on 16th October this year, the National Council of Resistance of Iran (NCRI) issued a report exposing the fact that authorities in charge of nuclear weaponization in Iran have established an entirely new site in the Sorkheh-Hesar region to the east of Tehran. The report outlined how the top-secret facility has been constructed in the middle of a military ballistic missile manufacturing complex. Work began on the complex in 2012 and the project became fully functional in 2017, dates that overlapped the implementation of the JCPOA and therefore debunk the regime’s claims that their nuclear activity has always been exclusively peaceful.

Such information is known to be reliable. The NCRI was first to alert the international community to the existence of a belligerent nuclear program in Iran in 2002. That revelation and repeated revelations over the past 18 years, thanks to high risk and detailed intelligence by the Iranian resistance and other sources, have demonstrated that the regime has consistently striven towards the production of a nuclear weapon. Clearly the JCPOA has been an abject failure from the outset.

Secondly, the Biden-Harris administration should also watch closely what happens at the forthcoming trial in Belgium of Assadollah Assadi, a senior diplomat from the Iranian Embassy in Vienna. On 1st July, 2018, Assadi was arrested and charged with passing 500gms of TATP high explosives and a detonator to an Iranian/Belgian couple from Antwerp. He allegedly had ordered them to drive to Paris and detonate the bomb at a major rally organised by the NCRI and attended by over 100,000 people, including hundreds of leading international, US and European parliamentarians and senior government officials.

A bomb attack of this magnitude, which would certainly have killed and maimed hundreds on European soil in probably one of the worst terror acts in recent history, could only have been authorized by the Iranian regime’s Supreme Leader, Ayatollah Ali Khamenei and by its so-called ‘moderate’ President Hassan Rouhani, who has already called on Biden to “return to commitments” over the nuclear deal. Mohammad Javad Zarif, the Iranian foreign minister, as the minister in charge of all of the clerical regime’s diplomats, must have been a key party to the terrorist plot, along with the minister of intelligence & security Mahmoud Alavi and the leaders of the Islamic Revolutionary Guards Corps (IRGC) and their extra-territorial terrorist offshoot the Quds Force.

Assadi’s trial will be the first time ever a serving Iranian diplomat has faced trial in Europe for direct involvement in an act of terrorism. The Iranian regime has made desperate and repeated efforts to secure his release, claiming diplomatic immunity. But the Belgian and German authorities have stood their ground. Now, according to a report by Reuters on 9thOctober, Assadi has outrageously warned Belgian police authorities that if he is found guilty there will be violent reprisals against European targets by unidentified groups.

The theocratic regime’s attempts to kill and maim people in Europe may now be moving towards a new and chilling dimension. The Iranian government, having already shown their determination to kill innocent people on European soil with high explosives, will show no restraint in carrying out future attacks.  The US and EU will be failing in their duty if they continue to appease this dangerous and aggressive terrorist regime. Susan Rice should think again and advise the new US president to pursue a tough line on Iran.