STUPIDITY & INCOMPETENCE OVER COVID19 IN IRAN 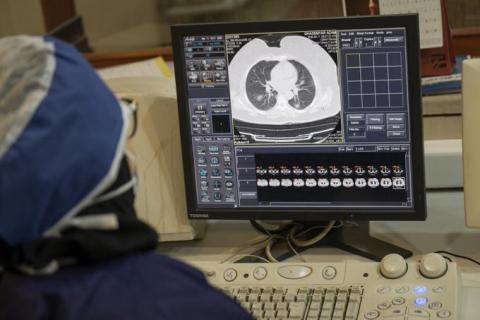 While the lies and deception over the coronavirus pandemic continue, the people of Iran are dying. Latest figures compiled by resistance units of the main democratic opposition movement, the People’s Mojahedin Organisation of Iran (PMOI/MEK), have estimated the true death toll from the disease at 12,400 across 228 cities and all 31 provinces in Iran. Meanwhile, the theocratic regime, which places ideology ahead of health care, claims that the death toll is 2,200. A World Health Organisation (WHO) expert, Dr Rick Brennan, who visited Iran in mid-March, claimed that the true figures were five times greater than those quoted by the Iranian government. Last week, even an official government spokesman blurted out the truth. Kianoush Jahanpour, head of the Public Relations and Information Centre of the Ministry of Health and Medical Education of Iran, said: “Every hour 50 people contract coronavirus and every 10 minutes a person loses their life due to coronavirus.”

Wrong-footed by a health crisis that the theocratic regime was ill-equipped to combat, the Supreme Leader Ayatollah Ali Khamenei, has characteristically resorted to blaming Iran’s perceived enemies, rather than his own manifest incompetence. He ludicrously accused the United States of having created the virus and his claims have been repeated by many of the regime’s top brass, with the secretary of Iran’s Expediency Council, Mohsen Rezaei, claiming that the USA and Israel were spreading the virus in Iran to start World War III. Such conspiracy theories and false claims have served to destroy the last semblances of trust in their oppressive government by Iran’s 80 million population.

The virus was first detected in the holy shrine city of Qom, the focus of a pilgrimage for many Muslims. In February, the Iranian government had invited more than 700 Chinese mullahs to Qom in an attempt to improve relations with the Chinese authorities, from whom Khamenei hoped to obtain economic assistance. The visiting mullahs almost certainly brought the infection to Qom and when the authorities realised there was an outbreak of Covid19 on 19thFebruary, they stupidly evacuated the mullahs, sending them to cities across Iran, in an attempt to flee the deadly virus. This outrageous policy quickly spread the contagion across the entire country. Shi’ia Muslim pilgrims from Kuwait, Bahrain, Iraq and Lebanon, who had travelled to Qom, also spread the disease across the Middle East, when they returned to their home countries.

Initially, Khamenei declared that there was no danger and that news of Covid19 was a plot to deter people from voting in Iran’s parliamentary elections. But when people realised that some of the infected mullahs had been transferred from Qom by the government to cities like Zahedan in south eastern Iran and Bandar Abbas, there was growing anger. In Bandar Abbas, outraged protesters burned down the medical centre where the infected mullahs had been treated, in a bid to protect their families from the virus. Now the real level of contagion in Iran has catapulted it to the top of the list of the world’s worst affected nations. In response to the growing crisis, the French international charity Médecins Sans Frontières (MSF)  shipped an inflatable hospital to be deployed in Isfahan, along with nine doctors and specialists. But an official from the Iranian Health Ministry announced “Iran does not need hospitals established by foreigners,” and banned MSF from entering the country. A spokesman for the government later claimed that MSF’s attempts to set up a hospital in Isfahan was simply “a cover for non-humanitarian activities.”

The pandemic has now swept across Iran, overwhelming hospitals, and leading to the surging death toll. The Islamic Revolutionary Guards Corps (IRGC) – the regime’s Gestapo, and its cohorts, have diverted almost all of the available face masks, sanitizers, protective clothing and other key medical supplies, for their own personal use and for the use of the mullahs, leaving Iran’s doctors and nurses with little or nothing to protect themselves or to treat the public. So far, more than 100 doctors, nurses and other medical staff have lost their lives while treating coronavirus patients. Reports from Qom, the hub of the outbreak, show that, 60 to 70 people are dying of Coronavirus every day and mortuaries can no longer deal with the number of corpses. According to eyewitness reports from the PMOI/MEK, at least 1,250 victims had been buried in Behesht-e Zahra cemetery in Tehran, by March 18. They also reported that a contract to dig 10,000 extra graves in the cemetery had recently been signed.

Meanwhile, to hide the appalling truth about the coronavirus, the mullahs are ordering death certificates to claim that victims died of other causes. Many high-ranking government figures have succumbed to the disease, including advisors and even family members close to Khamenei. When Hossein Asadollahi, a senior IRGC commander in charge of security in Tehran, died from the disease last week, the authorities claimed he was the victim of “chemical injuries” he had received during the Iran-Iraq war, which ended 32 years ago! Despite the need for social-distancing and a ban on crowds, the semi-official Fars news agency reported that huge numbers of mourners turned out for his funeral in Tehran, undermining the capital city’s lockdown provisions and exposing the regime’s total ineptitude in dealing with the crisis.

Such is the level of outrage and confusion among the general public in Iran, that fake news and bogus remedies are now gaining a foothold on social media. A report which went viral claimed that a British school teacher and some others had cured themselves of the Covid19 virus by drinking whisky and honey. This fake news, combined with the knowledge that alcohol-based hand sanitizers were effective in killing the virus, led to a sudden rush of people wrongly believing that drinking high-proof alcohol would kill Covid19 in their bodies. Alcohol is strictly prohibited in Iran and people have resorted to illegal bootleg sources, where industrial methanol has been mixed with a dash of bleach to create a clear coloured liquid, which is then sold in street markets as medicine to prevent the coronavirus. Iranian media has reported that already 480 people have been killed and more than 2,850 made seriously ill by ingesting methanol. In Tehran the parents of a 5-year-old boy forced him to drink methanol to protect him from the Covid19. He is now in a coma and blinded by the toxic fluid.

Dr Hossein Hassanian, an adviser to the Iranian Health Ministry, told the press that: "Other countries have only one problem, which is the new coronavirus pandemic. But we are fighting on two fronts here. We have both to cure the people with alcohol poisoning and also fight the coronavirus.” Methanol cannot be smelled or tasted in drinks. It causes delayed organ and brain damage. Symptoms include chest pain, nausea, hyperventilation, blindness and even coma. Hassanian continued: "Unfortunately, in some provinces, including Khuzestan and Fars, deaths from drinking methanol have exceeded the number of deaths from the new coronavirus.”