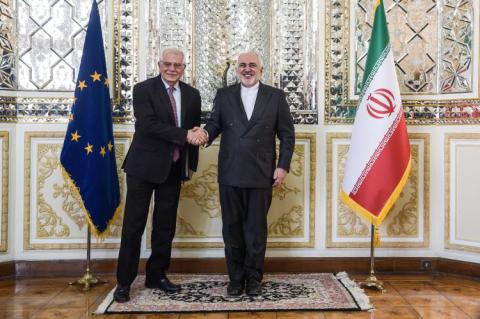 THE ROTTING CORPSE OF THE IRAN NUCLEAR DEAL

When challenged about its policy of appeasement to the theocratic Iranian regime, the Iran Task Force of the EU’s External Action Service (EEAS) likes to confirm that “The EU remains fully committed to the complete and effective implementation of the Joint Comprehensive Plan of Action (JCPOA) by all sides.” They boast that “The agreement is a key element of the global nuclear non-proliferation architecture and is a key achievement of multilateral diplomacy as endorsed by the UN Security Council Resolution 2231 (2015).” Their carefully worded statement explains why Europe is still trying to breathe life into the rotting corpse of Barack Obama’s failed nuclear deal.

The Iran Task Force says that the EU also “relies fully on the International Atomic Energy Agency’s (IAEA) monitoring and verification of Iran’s nuclear activities in its assessment of Iran’s nuclear program. The IAEA is the sole, impartial and independent international organization responsible for the monitoring and verification of nuclear non-proliferation commitments.” In case any lingering doubt remains, the Iran Task Force reaffirms that their boss, Josep Borrell, as the EU’s High Representative for Foreign Affairs and Security, “in his capacity as Coordinator of the JCPOA Joint Commission, will continue to do everything possible to facilitate the preservation and full implementation of the nuclear deal by all, as an essential building block for preventing non-proliferation and for enhancing regional security, which is in the interest of all parties.”

Such blind faith in the nuclear deal, the IAEA’s ability to monitor inside Iran and the mullahs’ trustworthiness, is revealing. It demonstrates clearly why Tehran continues to regard the West with contempt and exploits our weakness and naivety with growing confidence. The mullahs skilfully ensured that the nuclear deal prohibited IAEA access to all military sites in Iran, which is where their clandestine nuclear and ballistic missile program has always continued. The deal also failed to mention the Iranian regime’s aggressive expansionist policies in the Middle East and their sponsorship of terrorism worldwide. Nor did the deeply flawed JCPOA seek to constrain the mulllahs’ atrocious record of oppression and human rights abuse in Iran.

It was for all of these reasons that President Trump withdrew America from the JCPOA deal and imposed his ‘maximum pressure’ campaign of sanctions against the Iranian dictatorship. With President-elect Joe Biden about to enter the White House, the theocratic regime has sniffed an opportunity to end the sanctions which have crippled their ability to fund Bashar al-Assad in Syria, the Houthi rebels in Yemen, the brutal Shi’ia militias in Iraq and the terrorist Hezbollah in Lebanon. They are dangling the prospect of a revived nuclear agreement subject to the immediate ending of the ‘maximum pressure campaign’ by the Americans. In case Joe Biden and his nominee for secretary of state Tony Blinken, might be tempted by this offer, they should revisit the text of the 2015 JCPOA agreement.

The entire deal was based on Iran’s promise of good behaviour rather than a cast iron and verifiable monitoring mechanism. The final agreed terms of the nuclear inspection process failed to include the “anywhere, anytime” factor. Under the JCPOA Annex 1 – Nuclear Related Commitments, Clause Q. ACCESS, page 23, the text talks about “good faith”, taking care not to aggravate the mullahs, with the assurance that inspections will be  “kept to the minimum necessary… and not be aimed at interfering with Iranian military or other national security activities”… Consequently, the deal left the door open for anything to be placed under the carpet of national security.

Back in June 2012, a US security institute published new satellite imagery that showed "sanitization" and “excavation work” at the Parchin military site prior to the IAEA’s inspection. Then IAEA Director General Yukiya Amano said satellite images indicated that buildings were being demolished and soil removed at Parchin, about 30 km (20 miles) southeast of Tehran. Again, in an unusually strongly worded statement in August 2015, Yukiya Amano expressed serious concerns about suggestions Iran would inspect its own Parchin military site on the agency’s behalf. Iran stressed its nuclear program had no military dimensions and declared the site off-limits.

On September 21, 2015, the IAEA director informed the Board of Governors that one day earlier he had visited a suspect site within the Parchin Military Complex in Iran. Despite his assurance that the Agency’s verification processes were not compromised and that the Iranian side played a part in the sample-taking procedure, Iranian authorities and state media assured their audience that “no (foreign) inspectors were allowed inside Parchin”, that “the sample taking was limited to only 7 locations” and that “Yukiya Amano and his deputy’s visit was generic and ceremonial and they didn’t possess any equipment; not even a phone”.

Their actions are a searing indictment of the clerical regime’s reliability. As US State Department Special Representative for Iran Elliott Abrams told a webinar on Dec 15: “We now know that the Iranian regime also preserved and hid a massive amount of documentation from its nuclear weapons program, while keeping many of its original weapons and scientists working together on dual-use technologies.  Iran’s actions give every appearance of it wanting to retain the option of bringing all these elements back together again.  And as Iran continues to expand its nuclear activities and enriched-uranium stockpile today, it better positions itself to break out and produce the nuclear material those scientists would need for weapons”.

Based on the latest IAEA report,  Iran’s low enriched uranium (LEU) stock now exceeds by twelve-fold the limit set in the JCPOA. The Institute for Science and International Security concluded: “Iran’s estimated breakout time as of early November 2020 is as short as 3.5 months. Iran now has sufficient low enriched uranium to produce enough weapon-grade uranium for a second nuclear weapon, where the second one could be produced more quickly than the first. Iran would require, in total, as little as 5.5 to 6 months to produce enough weapon-grade uranium for two nuclear weapons”.

The verdict is due shortly in the trial in Belgium of an Iranian diplomat, caught red-handed in a plot to bomb a mass Iranian opposition rally outside Paris in 2018. He was clearly under orders from the highest echelons in Tehran. That fact alone should be enough to cause the US and the EU to re-think their Iran strategy. Iran is a pariah regime. Trying to raise the failed nuclear deal from the grave will be a catastrophic mistake.