REVOLUTION IN THE AIR 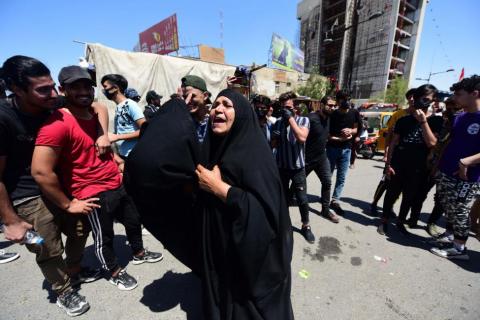 The coronavirus is not the only airborne problem troubling governments in the Middle East right now. For the rulers of Iran and Iraq, revolution is in the air. In Iran, the theocratic regime continues to lie about the extent of the contagion, claiming, absurdly, that the death toll is around 6,000, while in fact over 40,000 have died of the Covid-19 disease. Such is the appalling situation in Iran, with the collapsing economy and the mullahs’ bungled attempts to manage the virus, that 270,000 Afghan refugees, who had fled to Iran to escape the fighting in their own country, have now been forced to return to Afghanistan, taking the coronavirus with them. After years of conflict, Afghanistan’s dilapidated health service will be rapidly overwhelmed and thousands will die. The finger of blame can be pointed at Tehran.

In Iran, President Rouhani has told citizens, 70% of whom are now living below the poverty line, to leave their homes and return to work to kick start the ailing economy, leaving the people with the unenviable choice of staying at home and starving to death, or going to work and dying from the virus. In a bid to subdue simmering resentment at these unbearable conditions and to terrorise the 80 million population into submission, the mullahs have begun a new wave of executions. Last month, the authorities put to death at least 32 individuals in 14 cities. Those hanged included political prisoners, juvenile offenders and members of ethnic minorities. The situation in Iran’s medieval jails is particularly grisly, with many prisoners, especially the thousands of young students arrested during last November’s nationwide uprising, contracting the virus and being denied medical help, a virtual death sentence.

Accurate information on the spread of the coronavirus and the dire conditions in Iran’s prisons, is being provided daily by courageous resistance units of the People’s Mojahedin Organisation of Iran (PMOI/MEK), active in every town and city in the country. They report that in the notorious Evin Prison in Tehran, hundreds of prisoners are exhibiting dry coughs, fevers, shivering and diarrhoea. But the regime has refused to release them, quarantine them, or treat them. Similar conditions are occurring in prisons across Iran, leading to riots and mass breakouts. Recaptured prisoners have been executed by the Islamic Revolutionary Guards Corps (IRGC), the regime’s Gestapo, within days. The regime is terrified of another revolution that will sweep them from power, so they have resorted to daily hangings during the holy month of Ramadan.

Even students and young protesters who took part in demonstrations against the downing of the Ukrainian airliner in January, have been sentenced to flogging and long jail terms. The mullahs’ cyber-police have arrested thousands of people who have posted online information revealing the truth about the Covid-19 contagion. They have been accused of being enemy agents trying to damage Iran’s reputation by spreading false rumours about the virus. The theocratic dictatorship is displaying all of the signs of a regime in terminal decline, terrified of a popular uprising and panicking about losing their grip on power. But all of the signs now point to a new uprising. The Iranian people know that only regime change will free them from repression, starvation and tyranny. They are fed up with the mullahs funding proxy wars in Syria, Yemen, Iraq, Lebanon and Gaza. They are fed up with billions being squandered on building nuclear weapons and missile technology. They are fed up with the systematic and venal corruption that has enriched the Ayatollahs and their henchmen on money looted from the people. A new and massive uprising is being prepared. The Iranian people have lost their fear.

In neighbouring Iraq, a similar insurrection is being planned. When the coronavirus is finally brought under control, or even before that happens, the people of Iran and Iraq could rise up in simultaneous rebellions. On 7th May, Mostafa al-Kadhimi, Iraq’s former Spy Chief,received a vote of confidence from the Parliament of Iraq, confirming him as the new prime minister. For the hundreds of thousands of protesters who took to the streets of Iraq’s towns and cities in October and November last year, al-Kadhimi is seen as yet another puppet of the Iranian mullahs. Hundreds of young, unarmed protesters were shot dead during that uprising, by masked gunmen trained and funded by the IRGC. The protesters are demanding those responsible must be held to account, but they know that al-Kadhimi cannot deliver, as he has surrounded himself with pro-Iran factions. The endorsement of al-Kadhimi’s government came following months of political deadlock, after popular demonstrations toppled the previous government headed by Adel Abdel-Mahdi, who resigned in early December 2019, but had continued in a caretaker role since then.

Following al-Kadhimi’s endorsement by the Iraqi parliament, the ‘Organizing Committee of the October Revolution Demonstrations in Iraq’ immediately issued a statement saying “The revolutionaries categorically reject al-Kadhimi’s rule”. They said: “Now is the last chance to get rid of the criminal gangs that take their orders from Qom and Tehran.” Hundreds of protesters crowded into Baghdad’s main Tahrir Square, a focal point for the protests, chanting: “The people want to topple the regime.” On 8th May, Iraqi protesters in the provinces of Baghdad, Dhi Qar and Basra, took to the streets and chanted slogans against al-Kadhimi and his cabinet and insisted on the continuation of the revolution until they accomplish the complete overthrow of “all the corrupt ruling parties and gangs and the mercenaries of Iran’s velayat-e faqih (theocratic rule of the jurists) in Iraq.”

The situation in Iran and Iraq is explosive. The slightest spark will ignite  the twin rebellions. President John Fitzgerald Kennedy said: “ Those who make peaceful revolution impossible will make violent revolution inevitable.” Iran’s medieval mullahs and their policy of aggressive military expansionism across the middle East and the subjugation of dissent at home and abroad, have made peaceful revolution impossible. They are about to reap the whirlwind.