NO HONOUR AMONG VENEZUELA & IRAN THIEVES 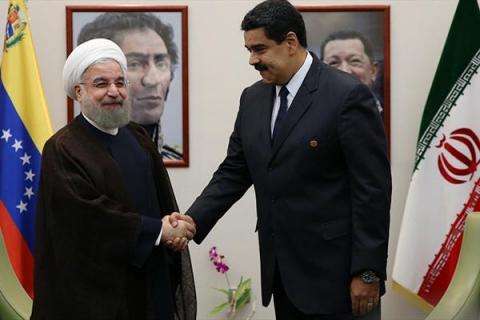 NO HONOUR AMONG THIEVES

When the disintegrating socialist state of Venezuela, where the people are starving, starts flying plane loads of gold to the collapsing theocratic regime of Iran, the world should sit up and take notice. Due to their status as international pariahs, both of these oil producing nations are under US sanctions, banning their ability to export oil. Now the plummeting value of crude, down to less than $1 a barrel due to the coronavirus pandemic, has deepened their respective economic woes.

The Venezuelan dictator Nicolás Maduro, through a combination of scandalous maladministration and venal corruption, has crushed his once prosperous country, leading to the mass exodus of Venezuela’s professional class, fleeing from the crisis-plagued nation that now faces severe poverty. Maduro and his predecessor, Hugo Chávez, became international cheerleaders for the hard left, expropriating private companies, firing expert workers and managers, slashing spending on repairs and basic maintenance and milking the profits for their personal enrichment. Their version of Bolivarian Bolshevism has resulted in Venezuela’s economy shrinking by more than 65%, a record-breaking recession, with inflation climbing to around 3,500%. The population now faces famine in a country that was once the richest in South America.

Desperate to restore one of his decaying oil refineries on Venezuela’s north-western coast, to prevent Venezuela from running out of gasoline altogether, Maduro sought help from his allies and dictatorial collaborators in Tehran. In exchange for sending expert engineers and much-needed gasoline additives, the mullahs demanded gold. In the last week of April alone, six planes from the sanctioned Iranian carrier Mahan Air, were seen flying in and out of Simón Bolívar International Airport near Caracas. Iran’s Mahan Air is run by the regime’s Islamic Revolutionary Guards Corps (IRGC), a listed terrorist organization. With the Venezuelan currency virtually worthless, Maduro had to loot his country’s last gold reserves to pay his terrorist friends. Around nine tons of gold worth an estimated $500 million dollars has been shipped to Tehran, leaving Venezuela with hardly any remaining hard currency reserves.

In early May, US Secretary of State Mike Pompeo said: "These flights must stop and countries should do their part to deny overflights just as many have already denied landing rights to this sanctioned airline.”  Pompeo is right to be angry. The unholy alliance between Venezuela and Iran, as the mullahs seek to prop up their most strategic partner in the West, poses a threat to world peace. Since the 1979 revolution that brought them to power, the Iranian regime has sponsored global terrorism and financed regional conflict. The world can rest assured that none of the gold will find its way toward helping the 80 million Iranians, 70% of whom are trying to survive with income levels below the international poverty line, against the background of a Covid-19 contagion that has spiralled out of control, already accounting for more than 40,000 deaths. Instead, the mullahs will continue to divert vital resources to propping up Bashar al-Assad’s bloody civil war in Syria, backing the Houthi rebels in Yemen, the vicious Shi’ia militia in Iraq and the terrorist groups Hezbollah in Lebanon and Hamas in Gaza. Anything left will find its way into the pockets of the Ayatollahs, who match their Venezuelan chums for unprincipled corruption. There is certainly no honour among thieves.

Mike Pompeo has repeatedly accused the mullahs of being the Godfathers of international terror. There is a mountain of evidence to back up his claim. In June 2018, Assadollah Assadi, a diplomat from the Iranian Embassy in Vienna handed over 500gms of high explosives and a detonator to an Iranian couple from Antwerp. He ordered them to drive to Paris and detonate the bomb at a major rally organised by the National Council for Resistance in Iran (NCRI) and attended by over 100,000 people. A combined operation by the German, French and Belgian intelligence services led to the arrest of Assadi and the other conspirators, all of whom are now in prison in Belgium, awaiting trial on charges of terrorism.

In America, the United States Department of Justice on August 9th 2018, announced that two Ministry of Intelligence (MOIS) agents of the mullahs’ regime, Ahmadreza Mohammadi Doostdar and Majid Ghorbani, had been arrested and charged with spying on and plotting to assassinate supporters of the Peoples Mojahedin Organization of Iran (PMOI/MEK), the main democratic opposition movement. Subsequently, similar action was taken against Iranian terrorist plots in Denmark, Bulgaria, the Netherlands and several other European nations, who are now imposing their own sanctions on the Iranian regime and blacklisting some of its agents. In late December 2018, the Albanian Prime Minister Edi Rama, expelled Iran’s ambassador and first secretary on the grounds that they posed a security risk to Albania, after he uncovered another bomb plot targeting opponents of the regime. Even in Glasgow, Scotland, ‘The Times’ uncovered a plot by armed MOIS agents to threaten and kill anti-regime protesters.

The mullahs’ regime also has a history of terror in South America. In 1994 the Iranian MOIS were behind the bomb attack on the Argentine Israelite Mutual Association building in Buenos Aires, killing 85 people and injuring hundreds. Their global terror plots extended to Africa, where in 1998, they were behind the simultaneous truck bomb attacks on the United States embassies in Kenya and Tanzania, that killed more than 200 people. Even more recently, the IRGC grudgingly admitted responsibility for the horrific shooting down of a Ukrainian airliner with the death of all 176 passengers and crew in January this year, after several days of denying all responsibility. A regime that sends its military thugs and even its diplomatic staff to kill and maim innocent civilians has removed itself from the norms of civilized behaviour.

Juan Guaidó, President of the National Assembly of Venezuela, was sworn in as acting president of the country in January 2019, challenging Maduro’s claim to the presidency. America, Canada and many Latin American and European countries immediately recognised him as Venezuela’s legitimate president, despite the fact that Maduro, with the backing of the army, still clings obstinately to power. With this record of supporting good over evil, it is a great pity that America, Canada and the EU could not provide similar backing to the legitimate opposition movement in Iran.