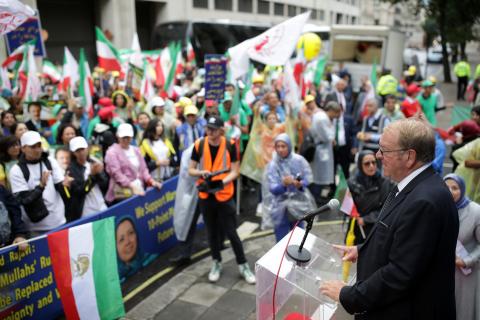 The sixth international rally organized by the Iranian resistance calling for regime change in Iran took place in London on Saturday 27thJuly. I was privileged to have been asked to attend and address the mass rally. Three thousand flag-waving supporters of the National Council for Resistance in Iran (NCRI) and its main constituent the Mojahedin e-Khalq/ People’s Mojahedin of Iran (MEK/PMOI) rallied in Trafalgar Square. It was perhaps appropriate that the rally took place under the statue of the famous British Admiral Lord Horatio Nelson, who won the battle of Trafalgar in 1805. What would he have made of the criminal Iranian regime’s international piracy, where they seized the British flagged oil tanker, The Stena Impero in the Strait of Hormuz and bombed 6 other oil tankers? Lord Nelson would be turning in his grave at this outrage.

In the past few weeks, tens of thousands of supporters of the NCRI and the MEK/PMOI have gathered in great rallies in Brussels, Washington, Berlin, Stockholm, Tirana and now London. The London rally also commemorated the tenth anniversary of the July 2009 massacre in Camp Ashraf, when over 1000 heavily armed Iraqi troops, acting on direct instructions from Tehran, attacked the civilian exiles, murdering 11 men and women and injuring over 400. It was the first of many atrocities committed against the unarmed MEK/PMOI refugees, on the orders of the then Iraqi Prime Minister Nouri al-Maliki, a corrupt puppet of the Iranian regime.  Many of the speakers at the London Rally noted how ten years on, after suffering many attacks and massacres in Camps Ashraf and Liberty in Iraq, Ashraf III has miraculously risen from the ashes in Albania, where the 2,500 courageous survivors of the attacks in Iraq now live. Great praise was heaped on the Albanian government for providing a safe haven for the Iranian resistance.

An international lineup of speakers was introduced by Dr. Matthew Offord MP, the Conservative Member of Parliament for Hendon in North London. Dr. Offord was joined by leading members of the Irish Senate, council members from the Law Society of England and Wales and Roger Godsiff, the Labour MP for Birmingham Hall Green. A former TUC chief Roger Lyons, former socialist MEP Paulo Casaca from Portugal and the former Conservative MP Brian Binley, further emphasized the cross-party support enjoyed by the Iranian opposition movement. Dowlat Nowrouzi and Hossein Abedini, leading members of the NCRI in Britain both addressed the rally. Over the course of these six international rallies, the NCRI/MEK/PMOI has shown the world the strength of their movement and the depth of their global support, with speaker after speaker demanding regime change in Iran and an end to the failed policy of appeasement.

Some speakers highlighted the fact that some left-wing newspapers claim that the West is faced only with the choice between war and appeasement. But that is a false dichotomy. Making concessions to this evil regime simply emboldens them and confirms the mullah’s view that the West is weak. Leading political speakers pointed out that we do not seek war, but we seek courage and resilience, not weakness. We must show our support for the Iranian people and their resistance. There were calls for the new Prime Minister Boris Johnson and the new British government to recognize the NCRI and its charismatic leader Maryam Rajavi and their right to demand regime change. It was even suggested that Boris Johnson should invite Mrs Rajavi to come to London, as she has visited almost every other capital city in Europe, gaining huge support and respect for her message of democracy, peace, justice, human rights and women’s rights. In a recorded speech projected onto a giant screen in Trafalgar Square, Maryam Rajavi, president-elect of the NCRI, said: “Today our response should be firm, based on the principle that the Revolutionary Guards and the regime of Iran should be held to account for their atrocities.”

Many speakers referred to the illegal seizure of the Stena Impero, the sabotaging of 6 other oil tankers in the Gulf, the shooting down of an American drone and the way the mullahs have supplied missiles for their Houthi rebel proxies in Yemen to fire into Saudi Arabia. They also supply weapons and personnel to prop up Bashar al-Assad’s bloody civil war in Syria, the terrorist Hezbollah in Lebanon, the brutal Shi’ia militias in Iraq and Hamas in Palestine. Portraying the Iranian regime as the Godfathers of terror, some speakers described how the so-called ‘moderate’ President Hassan Rouhani has presided over the execution of more than 3,500 people, including women and children. Inside Iran, the torturers and executioners are busier than ever, determined to crush all opposition under a tidal wave of fear and oppression.

Following the arrest of an Iranian diplomat from their embassy in Vienna, who has been charged with handing over a bomb to 3 Iranian agents with instructions to bomb a NCRI rally in Paris in June 2018, and the expulsion of the Iranian ambassador and first secretary from Albania last December on similar charges, there were repeated calls to close every Iranian embassy and expel their diplomats. Some speakers demanded that Britain should follow the example of the United States by blacklisting the Islamic Revolutionary Guards Corps (IRGC) and the Iranian Ministry of Intelligence & Security (MOIS).The Anglo-Iranian supporters of the NCRI also delivered a letter addressed to the new Prime Minister Boris Johnson at No. 10 Downing Street and signed by several representatives of their associations in the UK, echoing the demands of Madame Rajavi and the other speakers to blacklist the IRGC and MOIS.

The rally concluded with a march through the heart of Whitehall, past Downing Street and the Houses of Parliament, with many onlookers shouting their support for the 3,000 marchers. The rally and march ended with a demand that the Iranian regime should not be appeased or mollified. It is an evil regime that should be toppled. There was great praise for the Iranian people and the brave members of the MEK/PMOI resistance units operating in almost every town and city inside Iran. These heroic resistance fighters are risking their lives daily to bring an end to the evil theocratic tyranny that has wrecked and impoverished their country.The overall message from the great London rally was to tell the people of Iran that they have our support and that we in Europe stand shoulder to shoulder with them in their struggle to overthrow the tyrants.