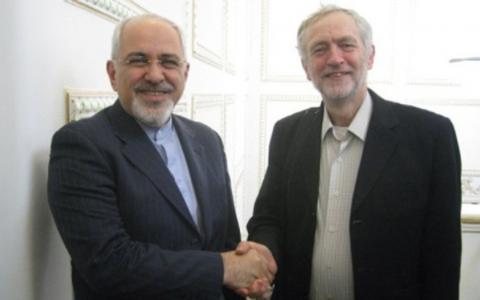 The repressive theocratic regime in Iran will be praying for a Jeremy Corbyn victory on Thursday. In Corbyn, the Ayatollahs see a real friend and ally. During a nationwide uprising in the past three weeks they have gunned down thousands of young protesters on the streets of Iran’s towns and cities, murdering over 1,000, wounding more than 4,000 and arresting an estimated 10,000. But in Corbyn, they see “a man of principle”, a staunch and “lifelong human rights activist” who recognises Iran’s ability to "bring peace" to the Middle East, according to Syed Salman Safavi, a senior aide to the Islamic Republic’s Supreme Leader Ayatollah Ali Khamenei.

Corbyn has refused to utter a single word of condemnation against the Iranian regime’s brutish and homicidal crackdown on the young protesters, who are demanding an end to Iran’s backing for Bashar al-Assad’s bloody civil war in Syria, the Houthi rebels in Yemen, the vicious Shi’ia militias in Iraq and the terrorist Hezbollah in Lebanon. Of course, Corbyn has called terrorists from Hezbollah and Hamas his “friends”. He has visited them in Lebanon and invited them to the House of Commons. He appeared at a wreath-laying event in Tunisia at the graves of individuals that carried out the Munich Olympic massacre. In 2011 he attended a Hamas event in Geneva, where he called for the release of terrorists and accused Israel of “war crimes”. He described the killing of Osama bin Laden by US Special Forces as a “tragedy”.  In 2018, rather than blaming the Iranian regime, he declared that “British military advisers are directing the war" in Yemen.

Of course, Jeremy Corbyn rejects such accusations as ‘smears.’ He famously tweeted “They smear me because I cannot be bought,” yet he admitted in his House of Commons Register of Interests that he had been paid £20,000 between 2009 and 2012 for appearances on the Iranian state broadcast network Press TV – a channel that has been banned in the UK for filming the detention and torture of an Iranian journalist. The fascist theocratic regime’s media love Corbyn. In 2014 he was a guest of the Iranian Foreign Minister Mohammad Javad Zarif in Tehran, where he was praised for “shaking the British ruling class” and “taking on the aristocracy.” He has enhanced his role as a stooge of the mullahs by demanding “credible evidence” that Iran was behind the attacks on two oil tankers in the Strait of Hormuz in June, despite the emergence of a film showing Islamic Revolutionary Guards Corps (IRGC) personnel in an Iranian patrol boat, removing an unexploded limpet mind from the side of one of the tankers they had attacked.

His lifelong support for the Palestinians and hatred of Israel, together with his failure to deal with anti-Semitism in the Labour Party, will certainly have cemented his role in the black list of friends of the mullahs. Presumably Corbyn applauds the Iranian regime’s role in ‘bringing peace to the Middle East’ by pouring money and troops into Syria to back Bashar al-Assad; by providing the Houthi rebels in Yemen with money and missiles; by sponsoring and commanding the brutal militias in Iraq who have murdered thousands of innocent Sunnis and by providing limitless support for the terrorist Hezbollah organisation in Lebanon and Hamas in Gaza.

Can the Labour leader who claims to be a lifelong human rights activist also defend the fact that opponents of the theocratic fascist Iranian regime are regularly imprisoned, tortured and hanged, often in public? An estimated 100,000 political prisoners have been murdered since the Ayatollahs seized control of Iran in 1979. Since President Rouhani took office in 2013, over 4,000 people have been executed, including many women and children. The UN is currently investigating how the regime executed over 30,000 political prisoners in 1988. What excuse can Corbyn make for Assadollah Assadi, the Iranian diplomat from their embassy in Vienna, who is awaiting trial in Belgium on terrorist charges? Assadi is accused of handing over a 500 gm bomb to three Iranian agents, ordering them to detonate it at a huge Iranian opposition rally in Paris. The Iranian ambassador and first secretary were expelled from Albania last year on similar charges.

Iran’s 80 million beleaguered and impoverished citizens are ruled by a clique of elderly, bearded, deeply corrupt mullahs, who have drained the country’s rich oil resources to featherbed their own lavish lifestyles and to fund their revolutionary expansionism and proxy wars. This is why millions of people have taken to the streets inside Iran, but also in Iraq and Lebanon, demanding an end to Iranian meddling in the Middle East and an end to corruption and oppression. It seems clear that the Iranian mullahs have found a soulmate in Jeremy Corbyn. Let us hope that their prayers are not answered. It would be a disaster for Britain and a disaster for the Middle East if Corbyn was handed the keys to No.10 on Thursday.