JOE BIDEN SHOULD THINK HARD ABOUT RE-ENGAGING WITH IRAN 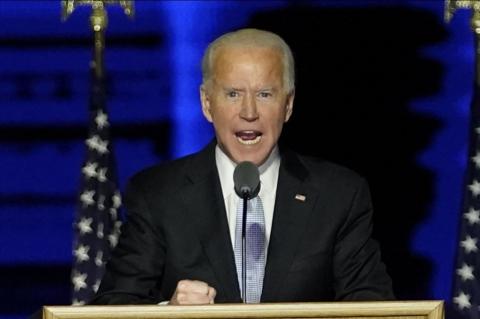 WILL US POLICY ON IRAN CHANGE RADICALLY UNDER JOE BIDEN?

As the Trump presidency winds down and Joe Biden prepares to enter the White House, all eyes are on the Middle East and in particular the future of US policy on Iran. The outgoing secretary of state Mike Pompeo has pledged to toughen sanctions on Iran before he demits office. Drawing attention to the first anniversary of the vicious suppression of nationwide protests in Iran, when more than 1,500 unarmed protesters were shot dead and over 12,000 arrested, Pompeo said: “On November 15, 2019 and in the week that followed, brave Iranians took to the streets of more than 200 cities across Iran to protest four decades of mismanagement by a corrupt regime that squandered its people’s wealth on terrorism abroad and oppression at home. The Iranian regime tried to hide the evidence of its brutal crackdown through censorship, intimidation, and the digital darkness of internet shutdowns, and still refuses to allow independent investigations into the killings it perpetrated during that fateful week.” As Biden talks up re-engaging America with the Iran nuclear deal, President Trump is likely to use his remaining days in office to tighten sanctions under his ‘maximum pressure’ campaign. The Republican majority in the Senate, subject to any upsets in the January 5th run-off in Georgia, will make it hard for Biden to cosy up to the mullahs in Tehran, the way his mentor Obama did.

Nevertheless, it remains the case that Biden repeatedly stated during his campaign that it was his intention to re-engage in dialogue with the Iranian mullahs and to seek to restore the nuclear deal. The president-elect has announced that he will nominate his long-time friend and foreign policy adviser Tony Blinken, as his secretary of state. Jake Sullivan is likely to become his national security adviser. Both Blinken and Sullivan, who was a key architect of the Joint Comprehensive Plan of Action (JCPOA) nuke deal, have said they favour restoring the deal, but both have emphasized that it will be subject to Iran adhering strictly to the conditions of the Joint Comprehensive Plan of Action (JCPOA) and ceasing their de-stabilizing activities in Syria, Yemen, Iraq and Lebanon. It is unlikely that the Iranian regime will embrace this approach. Iran’s Supreme Leader, Ayatollah Ali Khamenei has demanded massive compensation for the damage to Iran’s economy that he blames of Trump’s ‘maximum pressure campaign’ sanctions.  He has also demanded the complete removal of sanctions before any negotiations can resume. The theocratic regime has also boasted of its blatant violation of the nuclear deal. It seems that the positions of the two sides are irreconcilable.

Before rushing back to Tehran to hug the mullahs, the Biden administration must surely take note of the court case about to begin in Belgium. On 27th November the trial will start of Assadollah Assadi, a senior diplomat from the Iranian Embassy in Vienna and three other co-conspirators, on charges of terrorism. On 1st July, 2018, Assadi was arrested and charged with passing 500gms of TATP high explosives and a detonator to an Iranian/Belgian couple from Antwerp. He had allegedly passed the bomb to Amir Saadouni, 40, and his wife, Nasimeh Naami, 36 — both of Iranian origin — at a Pizza Hut restaurant in Place d’Armes, Luxembourg. Assadi had instructed them to detonate the bomb at a major gathering of the National Council of Resistance of Iran, attended by more than 100,000 people at Villepinte near Paris. The rally was addressed by leading politicians and senior government officials like Rudy Giuliani, Newt Gingrich, Theresa Villiers MP the former UK Cabinet minister and Stephen Harper, the former Prime Minister of Canada. According to Jaak Raes, head of the VSSE, Belgium’s state security service, “The plan for the attack was conceived in the name of Iran and under its leadership. It was not a matter of Assadi’s personal initiative.” Will Joe Biden really want to negotiate with a regime who planned to kill perhaps hundreds of people, including Americans, on European soil?

Biden may also be alarmed to hear that the Iranian regime has been providing a safe haven for the leadership of America’s arch enemy, al- Qaeda. It was revealed last week that Abu Muhammad al-Masri, al-Qaeda’s second-in-command, was gunned down by two Israeli Mossad agents on a motorbike, in the centre of Tehran on 7th August. Al-Masri was assassinated, together with his daughter Maryam, the widow of Osama bin Laden’s son Hamza and herself a wanted terrorist, while sitting in their Renault, in a wealthy suburb of the Iranian capital. Al-Masri was the mastermind behind the 1998 bomb attacks on the US embassies in Kenya and Tanzania that killed 224 people. He was on the FBI’s ‘most wanted list’ and the daring Mossad operation to eliminate him was believed to have been requested by President Trump with the active involvement of the CIA. Deeply embarrassed by the assassination, the fundamentalist Shi’ia mullahs tried to cover up al-Masri’s identity, desperate to hide the fact that they were harbouring one of the world’s most dangerous Sunni terrorists.

The Iranian regime is on its last legs. Their economy has collapsed. Inflation is running at 60%. They have debts of over $260 billion and massive unemployment. The Covid pandemic has killed more than 150,000 Iranians. If the mullahs believe that the arrival of a new American President will offer them some sort of olive branch they are seriously mistaken. Eighty million Iranians are sick to death of a regime that has stolen their wealth, wrecked their country and sponsored war and terrorism around the world. The young people have lost their fear. Resistance units inspired by the National Council of Resistance of Iran (NCRI) have sprung up in every town and city in the Islamic Republic. The next uprising will drive the mullahs from power and restore peace, freedom and justice to this beleaguered nation. Biden, Blinken and Sullivan should think long and hard before they restore diplomatic relations with this terrorist regime.