IRGC IS A SPENT FORCE IN IRAN 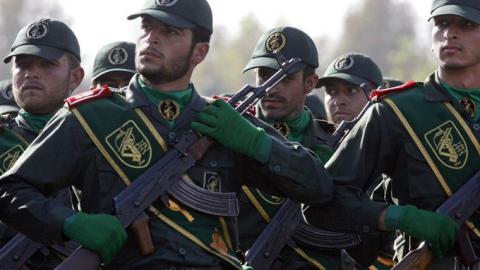 Iran’s Supreme Leader Ali Khamenei presides over a pyramid of corruption, at the centre of which is the sinister Islamic Revolutionary Guards Corps (IRGC), the regime’s Gestapo, which answers directly to Khamenei and controls almost the entire economy, including all of Iran’s monetary and financial institutions. The IRGC pays no taxes and funnels resources into the pockets of the ruling elite, while sponsoring terrorism and aggressive military expansionism abroad. The IRGC runs construction companies and missile factories and is largely responsible for the regime’s ongoing nuclear programme, which never ceased, despite Obama’s JCPOA. Ayatollah Ruhollah Khomeini created the IRGC to spread his revolutionary policy of violence and terror beyond Iran’s borders. The IRGC and its Quds Force extra-territorial offshoot not only brutally enforces the clerical regime’s oppressive domination of Iran’s population, it spreads its terror network worldwide.

Until his elimination by an American drone strike at Baghdad Airport in January 2020, the terrorist head of the IRGC’s Quds Force was General Qasem Soleimani. His elimination together with his ally the Iraqi head of the Popular Mobilization Forces (PMF) Abu Mehdi Mohandes, dealt a fatal blow to the Iranian regime and to the IRGC. Soleimani has been replaced by Esmail Ghaani, who is regarded with contempt by the Iraqis and has clearly lost influence and control over the Quds Force and its allies. The PMF is beginning to split into rival militias across Iraq as the Iraqi people demand an end to Iranian meddling in their country and the expulsion of the IRGC and its agents. Ali Khamenei is now terrified that the IRGC is beginning to crumble. He knows if the IRGC collapses, so will his theocratic regime.

The IRGC’s involvement in proxy wars throughout the Middle East has also caused outrage across Iran, where the economy has collapsed, the rial is in freefall and 75% of the population now struggle to survive on incomes that have fallen below the international poverty line. Iranians are appalled that their money has been stolen by the mullahs to finance the IRGC and its involvement in backing Bashar al-Assad’s bloody civil war in Syria, the Houthi rebels in Yemen, the brutal Shi’ia militias in Iraq and the terrorist Hezbollah in Lebanon. Against the backdrop of the raging pandemic that has now cost more than 281,000 lives in Iran, there is seething unrest and a palpable tension that could explode into a new revolution at the slightest spark.

When the theocratic regime announced a massive hike in gasoline prices in November 2019, millions of poor Iranians took to the streets in protest. The mullahs’ predictable reaction was to order the IRGC and their internal security thugs – the Basij – to brutally supress the nationwide uprising. Black-clad and masked IRGC snipers gunned down unarmed protesters from the rooftops of government buildings, shooting to kill. Basij goons beat young demonstrators with batons. 1,500 protesters were killed, thousands more were wounded. Over 12,000 were arrested and thrown into the regime’s medieval prisons. Dozens have been sentenced to death for daring to challenge the authority of the fascist dictatorship. The execution of political prisoners has become almost a daily event.

There is now widespread revulsion and hatred of the IRGC throughout the Iranian population. Mojahedin e-Khalq (MEK) resistance units have been formed in towns and cities across Iran. Young resistance fighters have lost their fear and have attacked court houses, government buildings and IRGC and Basij bases. Banners, posters and images of the Supreme Leader are regularly defaced. Now there is even evidence of escalating splits within the higher echelons of the clerical regime’s leadership. A leaked classified recording of an interview with foreign minister Javad Zarif revealed that he had been in open conflict with Qasem Soleimani for years and had felt his role had been undermined by the IRGC. He claimed that he had spent much of his time clearing up the international mess made by Soleimani and the IRGC.

Over the past four decades, it has been estimated that 120,000 opponents of the regime have been executed. Dozens more have been assassinated outside of Iran. It is now well established that this systematic persecution of political opponents culminated in the massacre of 30,000 political prisoners, most of whom were supporters of the MEK, in prisons all across Iran in 1988, a crime against humanity that is now the subject of an investigation by seven special UN human rights rapporteurs.

The arrest of the Iranian diplomat, Assadollah Assadi and his conviction in a Belgian court for terrorism and attempted murder, has exposed the way the regime uses its embassies as terror cells and bomb factories and has highlighted how the mullahs have become the Godfathers of international terror. There can be no doubt that the day of reckoning is fast approaching for the regime and for the IRGC. The mullahs cannot escape justice and will be held accountable and will answer for their crimes and terrorism before the international courts of justice and before the people of Iran.

There are growing signs that the IRGC is caving in. On 18th April they announced the mysterious death of the deputy head of the Quds Force, General Mohammad Hosseinzadeh Hejazi, claiming he had died from “heart disease.” This was quickly denied by the son of another killed IRGC commander, who claimed Hejazi had been sacrificed. It now seems that a pattern of planned assassinations of leading IRGC figures, together with explosions at Natanz and other nuclear sites and the killing of nuclear scientists, points to the infiltration of the IRGC by agents of the resistance and even perhaps by agents of Mossad. The mullahs are now terrified. There is growing evidence of IRGC personnel absconding because they have not received their pay. Recruitment is collapsing. It is now a question of how much longer the organisation can survive.

The West must surely understand that only the final overthrow of the tyrannical mullahs will see peace, justice and freedom restored to the Iranian people. We must give them our full backing and let them know that the downfall of the IRGC will be the catalyst for the fall of the Velayat-e-Faqih (guardianship of the clergy) regime.