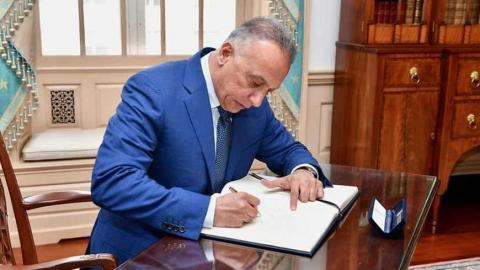 Iraq’s prime ministerial merry-go-round continues to spin apace. Spy chief Mustafa al-Kadhimi, director of the country’s National Intelligence Service, is now the third prime minister designate this year, following the withdrawal of Adnan al-Zurfi, the previous prospective candidate, after he  failed to secure enough support to form a government. Adnan al-Zurfi had tried to step into the shoes of Mohammed Tawfiq Allawi, who suffered a similar fate, leaving Iraq under the tremulous caretaker control of Adil Abdul-Mahdi, the crooked former prime minister and puppet of the Iranian mullahs, who was forced to resign last November amidst widespread protests.

Under the Iraqi constitution, a prime minister designate has thirty days to secure the backing of parliament for his new government. This has been the stumbling block for each of Abdul-Mahdi’s chosen successors so far, as they have attempted to gain the approval of the wide range of deeply divided and sectarian factions that make up Iraq’s Majilis. The biggest problem for each of the prospective prime ministers has, however, been obtaining the blessing of the Iranian regime, who now regard Iraq as a servile province. Al-Kadhimi is expected to present his nominees for the cabinet to the Iraqi Council of Representatives shortly.

He appears to have won the backing of all of the main Shi’ite parties, as well as the key Kurdish and Sunni factions. Crucially, he also seems to have been given the green light by the Iranian mullahs, despite objections from Kataib Hezbollah, one of the Popular Mobilization Units’ (PMU’s) more dangerous Iranian-backed terrorist militias, who accused al-Kadhimi of having been involved in the US assassination of General Qasem Soleimani and the PMU’s deputy chief Abu Mahdi al-Muhandis. Kataib Hezbollah’s accusations have, however, fallen on stony ground and do not appear to have caused any ripple of dissent in Tehran.

Iraq’s President Barham Salih hosted a special televised designation ceremony for al-Kadhimi, attended by most of the country’s top political figures, as a show of solidarity for the 53-year-old spy chief. None of the previous designated contenders for the post had been honoured with a similar ceremony. Prominent at the event was Iranian General Esmail Qaani, who has now taken over the role of head of the Islamic Revolutionary Guards Corps (IRGC) Qods Force, following the assassination of his predecessor Qasem Soleimani in a US drone strike at Baghdad Airport in January.

Although the coronavirus has driven most of the protesters out of their encampment in Baghdad’s Tahrir Square and off the streets of Iraq’s towns and cities, their demand for a government of independent technocrats to replace the venally corrupt political elite, is still bubbling under the surface. Demonstrators in the nationwide uprising in Iraq last October and November blamed government incompetence and corruption and the ruling elite’s slavish subservience to the fascist Iranian regime, for the country’s collapsing economy and security breakdown. But such is the extent of the institutionalized corruption and Iranian meddling in Iraq’s internal affairs, that al-Kadhimi, like his predecessors, will find it difficult to appoint a cabinet that meets the demands of the protesters and the approval of the political factions.

Nevertheless, his chances of survival appear to have improved following statements supporting his appointment from the US, the United Arab Emirates and the UN in Iraq. Indeed, al-Kadhimi has said that his government will seek to cooperate with the US in the forthcoming ‘strategic dialogue’ between the two countries due to be held in June, where discussion will focus on a continuing American military presence in Iraq, to lead the on-going fight against the Islamic State (ISIS). Al-Kadhimi has also suggested calling early “free and fair” elections in Iraq to gain approval for his choice of government, although free and fair elections would be something of a novelty in a country where the polling stations are guarded by militias, armed and financed by Tehran.

Al-Kadhimi was born in Baghdad, but grew up in the southern governate of Dhi Qar, a hotbed of anti-government dissent. As a lawyer and journalist  who opposed Saddam Hussein, he fled from Iraq in 1985 and continued to pen articles attacking the Iraqi dictator from his exile first in Iran, then in Germany and the UK. He returned to Iraq after the US invasion in 2003 and was appointed as head of the National Intelligence Service in 2016. As prime minister, assuming he wins the approval of the deeply divided and sectarian Majilis, he faces a daunting task. After years of mismanagement and corruption, Iraq is a basket case. Its economy has been destroyed and its security devolved to pro-Iranian warlords. The collapse in oil-prices, coupled with the coronavirus pandemic have crippled the nation. Al-Khadimi’s two pressing priorities will be to tackle corruption and to identify and hold to account those responsible for shooting dead hundreds of mostly young, unarmed protesters during the uprising. Unfortunately, the guilty parties in both cases are the very people he looks to for support as prime minister, so he is faced with an impossible task.

Taking over the helm of a failed state, ravaged by Covid-19, drained of resources by decades of venal corruption and ruled by corrupt Shi’ia warlords, is not an enviable prospect. As the compromise candidate, seen as bridging the divide between Iran and America, al-Kadhimi has already lost the support of the protesters and seems set to resort to the same tired, old strategy of sectarian conflict and disunion. The moment the lockdown ends, the protesters have made clear that they will take to the streets again in their tens of thousands, to rid Iraq of the Iranian regime’s gangsters and to restore a legitimate and accountable government in Baghdad. With another similar rebellion ready to explode in Iran, the turbaned tyrants in Tehran may be facing their closing chapter.