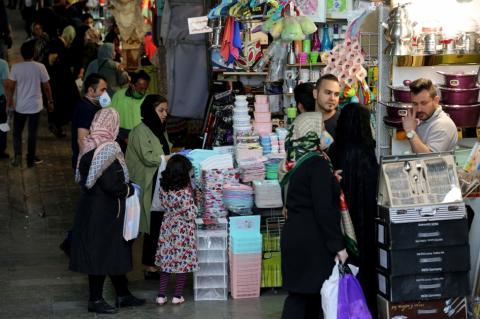 The Iranian economy has collapsed. The ayatollahs can no longer afford to pay the wages of government employees, as the triple whammy of US sanctions, the coronavirus pandemic and rampant corruption, reduce their budget to chickenfeed. As international vultures hover over the clerical regime’s rotting corpse, the mullahs have ramped up their provocative testing of ballistic missiles and illegal nuclear activities in a costly, last-ditch bid to cling to power. They can ill-afford to divert their dwindling resources to militaristic posturing, while 70% of the Iranian population is starving, trying to survive on less than the recognised international poverty line of $1.90c per day. The Iranian currency – the rial – fell a further 14% in June to its lowest level ever. In a country that boasts the world’s second largest gas reserves and fourth largest crude oil reserves, the Iranian regime’s economic disintegration has become a byword for incompetence, avarice and greed.

Iran, despite its rich, civilised and open culture, has become an international pariah, its religious fascist regime condemned for human rights abuse and the export of terror, while its 80 million impoverished citizens, over half of whom are under thirty, struggle to feed their families against a background of Covid-19 raging across the nation. The mullahs tell the world that only around 10,400 people have died from the disease, but the true figures are believed to be in excess of 62,000, as the contagion spirals out of control. Supplies of drugs, personal protective equipment and ventilators have been sent to hospitals for the elite or sold on the black market by the Islamic Revolutionary Guards Corps, the regime’s Gestapo. Meanwhile, President Rouhani has ordered the population back to work in an attempt to re-boot the economy, resulting in a second, deadly wave of coronavirus contagion.

The Iranian people have long known that the regime is more toxic than the virus. The mullahs are now terrified that their theocratic system will come tumbling down, as the destitute masses rise up in fury and cast them into the garbage can of history. They have redoubled their repression and tyranny in an effort to prevent a new revolution, arresting, torturing, flogging and hanging young political protesters who are routinely accused of supporting the Mojahedin e-Khalq (MEK) democratic opposition movement. Eight death sentences for “corruption on earth” have been approved for young protesters who were arrested following the November uprising.

Meanwhile, there is smouldering fury that the ayatollahs have spent $30 billion propping up Bashar al-Assad’s murderous Syrian regime and squandered looted resources on their extremist proxies like Hezbollah in Lebanon, the Shi’ite militias in Iraq, the Houthi rebels in Yemen and Hamas in Gaza. But, starved of resources, the theocratic regime’s international adventurism is grinding to a halt. There are signs of military withdrawal in Syria and even Iran’s strategic allies in Iraq and North Korea say that US banking sanctions have made it impossible to circumvent President Trump’s ‘maximum pressure’ campaign, to provide a lifeline to the fascist dictatorship.

Now the truth about Iran’s economic meltdown is out. President Hassan Rouhani has admitted that international economic pressure has cost his government over $200 billion in lost revenues. At a session of the Iranian Majilis (parliament) in early June, Abdolnasser Hemmati, the head of the Central Bank of Iran,  admitted that the country’s banking system had been seriously disrupted. Mohammad Bagher Nobakht, the head of Planning and Budget Organization, told the Majilis that it had become almost impossible for the ayatollahs to sell crude oil, the country’s main source of income. Nobakht went on to say that the government could no longer rely on oil revenues, but warned that raising taxes was not an option due to the recession. “In such circumstances, governing the country is very difficult,” he told MPs. He continued by telling the Majilis that providing “at least $2.47 billion of the 2020-2021 budget bill” is impossible. He said the government needs around $1.76 billion just to pay its employees and to continue operating. He admitted that the money is not available.

Nobakht’s statement caused an outcry in the parliament. The newly-elected hardline MP from the city of Mashhad - Javad Karimi Qoddussi, claimed that President Rouhani had personally authorised the then Governor of the Central Bank of Iran - Valiollah Seif - to give $36.1 billion and 80 tons of gold to three gangs involved in the smuggling of goods, foreign exchange and drugs in the Iraqi Kurdish province of Sulaimaniyah, while it was under the control, according to Qoddussi, of the Americans and Saudis. Qoddussi is a sycophantic devotee of the Supreme leader Ayatollah Ali Khamenei and a close ally of the newly appointed Speaker - Brig. Gen. Mohammad Baqer Qalibaf, who is intent on implementing the Supreme Leader’s masterplan to sweep aside the existing government of President Hassan Rouhani and to replace it, in Khamenei’s own words, with a "Young Hizbollahi government". Accusing Rouhani of corruption will be seen as a great irony by the Iraqi population, who know that the Supreme Leader and the Speaker are among the most venally corrupt people in Iran. But the parliamentary outburst by Qoddussi has provided a strong signal of the infighting that has now splintered the clerical regime.

Qoddussi went on to blame Rouhani for the nationwide uprisings that exploded across the country in December 2017 and again in November 2019, when the IRGC gunned down thousands of unarmed protesters. Mocking Rouhani’s attempts to have appeared as the ‘hero’ who had crushed the protests, Qoddussi claimed that Rouhani’s tactics had backfired, provoking even greater anti-government unrest. Qoddussi said: “We witnessed two instances of [Rouhani’s] heroism in inciting the people during the events in 2017 and in 2019 and the people who were killed then, and in the fall of the national currency value.” Rouhani’s term of office does not end until 2021 and Khamenei’s desperate effort to get rid of him before then is perhaps the strongest indication yet that the mullahs no longer believe they can survive for another year.