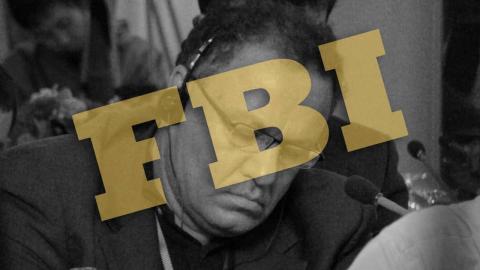 When the FBI arrested Kaveh Lotfolah Afrasiabi, a prominent political scientist and self-styled expert on Iran, it should have sent shockwaves through Western media circles. Afrasiabi had spent the past thirteen years proclaiming the virtues of the Islamic Republic to US law-makers and media outlets. He was a skilled and trusted lobbyist, at least until the FBI uncovered the fact that he had been paid upwards of $265,000 through Iran’s Permanent Mission to the UN in New York, in flagrant breach of the Foreign Agents Registration Act (FARA). A press release from the U.S. Justice Department set out the charges now faced by Afrasiabi, for “conspiring to act as an unregistered agent of the Government of the Islamic Republic of Iran.”

John C. Demers, Assistant Attorney General for National Security said: “For over a decade, Kaveh Afrasiabi pitched himself to Congress, journalists and the American public as a neutral and objective expert on Iran. However, all the while, Afrasiabi was actually a secret employee of the Government of Iran and the Permanent Mission of the Islamic Republic of Iran to the United Nations, who was being paid to spread their propaganda. In doing so, he intentionally avoided registering with the Department of Justice as the Foreign Agents Registration Act required. He likewise evaded his obligation to disclose who was sponsoring his views. We now begin to hold him responsible for those deeds.”

The revelation that an Iranian agent was embedded in the heart of the U.S. democratic process certainly came as no surprise to representatives of the National Council of Resistance of Iran (NCRI) and the Mojahedin e-Khalq (MEK), the main opposition movement to the theocratic fascist regime in Iran. The NCRI and MEK have long been the target of a campaign of misinformation and demonization by the regime. Frequent egregious newspaper articles and TV and radio documentaries have appeared over the years, trumpeting slurs and fabrications that have clearly been sourced directly from Tehran. Generally, an Iranian ‘expert’, like Afrasiabi, can be found, who has briefed the journalists concerned. There has even been evidence of Western journalists, newspapers and politicians being directly paid by the Iranian regime.

The theocratic regime’s history of deception and disinformation dates back to its very foundation following the 1979 revolution which brought the primeval, bearded psychopath, Ayatollah Ruhollah Khomeini, to power. His first great lie to the Iranian people was that he was God’s representative on earth, supervising the introduction of a constitution based on ‘Velayat-e-faqih’ (the absolute rule of the clergy) and an aspiration to create a worldwide Islamic caliphate. Overnight he gave birth to Islamic fundamentalism, declaring that anyone who challenged his authority would be guilty of ‘moharebeh’ or waging war against God. This fictitious edict has been used ruthlessly for the past 41 years to systematically murder tens of thousands of the regime’s opponents, most notably supporters of the MEK, who advocate a secular government, democratic elections and universal suffrage in direct opposition to the fascist repression of the mullahs.

Infuriated by their stance against him, Ayatollah Khomeini ordered a brutal and bloody crackdown on members, supporters and sympathisers of the MEK in what has been described as the “reign of terror”. According to a decree by Khomeini, “the Mojahedin of Iran are infidels and worse than blasphemers… They have no right to life.”  Since then, the MEK have been the principal victims of human rights violations and systematic annihilation in Iran and they are a key target for demonization and assassination abroad. Over the past four decades, 120,000 of its members and supporters have been executed. Dozens more have been assassinated outside of Iran.

The execution, imprisonment and torture of MEK members, supporters and their families continue unabated to this day. In the summer of 1988 the summary execution of more than 30,000 political prisoners in Iran took place, in an atrocity that surely must rank as one of the most horrific crimes against humanity of the late twentieth century. The vast majority of the victims were activists of the MEK. The mass executions, in jails across Iran, were carried out on the basis of a fatwa by the regime’s then Supreme Leader, Ayatollah Khomeini. Needless to say, following their long history of lies and deception, all of these murders and assassinations are routinely denied. There is now a high-level investigation into the 1988 massacre underway by the United Nations.

We now await the verdict in an Antwerp court in the case of Assadollah Assadi, an Iranian diplomat from their embassy in Vienna, who, together with three Iranian co-conspirators, was arrested on terrorist charges after being caught in June 2018, handing over a 500gm bomb and ordering them to detonate it at a huge NCRI/MEK opposition rally in Paris. A verdict, which will shake western relations with the Islamic Republic to its foundations, is expected on 4th February. Confronted by this appalling conspiracy, Mohammad Javad Zarif, the Foreign Minister of Iran, immediately denied all knowledge of the plot, claiming it was a “false flag” attempt to smear his government. Similar denials of involvement and protests of innocence followed the expulsion of the Iranian Ambassador and First Secretary from Albania on terrorist charges.

Assadollah Assadi also faces further terrorist charges in Germany. When he was arrested in Bavaria by German police, they found a notebook in his car which contained details of the bomb plot and the money paid to his co-conspirators. It also contained information about 289 visits Assadi had made to different countries, 144 of which were to meetings in Germany, indicating that Assadi was supervising terrorist activities across the EU and Germany was clearly the epicentre of his spy network. The NCRI has issued numerous warnings over the years of the network of spies, assassins and terrorists deployed by the regime, often disguised as diplomats or academics. The mullahs’ twin-track approach of silencing opponents at home and abroad by threats or murder, while projecting an image of a ‘moderate’ and peace-loving regime, became seriously unstuck in late 2017 when there was a nationwide uprising against the theocratic dictatorship. In their usual brutal fashion, the mullahs ordered a vicious crackdown, shooting dead over fifteen hundred unarmed protesters, wounding hundreds more and imprisoning over twelve thousand, many of whom have since been tortured and executed. Despite the coronavirus pandemic, the protests have continued.

Attacks on the NCRI and MEK in the U.S. and EU media almost always contain blatantly false allegations that can be traced back directly to the Iranian Ministry of Intelligence and Security. Quite frequently, such attacks can be found to have been conveyed through a familiar handful of pro-Iran lobbyists and supposed academics whose work is all but indistinguishable from Kaveh Lotfolah Afrasiabi, who now faces up to ten years jail in America. Sadly, years of appeasement of the tyrannical Iranian regime have emboldened their efforts to deceive the West, while indulging in grave violations of human rights at home and aggressive military expansionism and the export of terrorism abroad. The arrest of Afrasiabi and the trial of Assadi should surely be a wake-up call for the West.