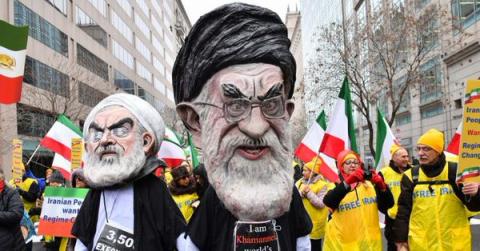 As America relentlessly turns the screw on Iran, the theocratic dictatorship continues to lash out in predictable ways. It has mobilized its Ministry of Intelligence & Security (MOIS) agents to track down and eliminate opponents of the regime. Posing as diplomats, these Iranian spies and assassins have launched a series of attacks across Europe and North America.In late June last year German police arrested Assadollah Assadi, a diplomat from the Iranian embassy in Vienna. Three would-be Iranian bombers told the police that Assadi had given them the bomb and instructed them to detonate it at a major Iranian opposition rally near Paris, attended by over 100,000 anti-regime Iranians and by prominent politicians like Rudy Giuliani and Newt Gingrich. Assadi and the three bombers were charged with acts of terrorism and are in prison awaiting trial.

Subsequently, similar action was taken against Iranian terrorist plots in the United States, Denmark, Bulgaria, the Netherlands and several other European nations, who are now imposing their own sanctions on the Iranian regime and blacklisting some of its agents. In late December, the Albanian Prime Minister Edi Rama, expelled Iran’s ambassador and first secretary on the grounds that they posed a security risk to Albania, after he uncovered another bomb plot targeting opponents of the regime. Even in Glasgow, Scotland, ‘The Times’uncovered a plot by armed MOIS agents to threaten and kill anti-regime protesters. In America, several MOIS agents were arrested and charged with carrying out surveillance operations in preparation for assassination attempts aimed at prominent officials in the Mojahedin e-Khalq, the main democratic Iranian opposition movement. It is clear that Iran uses its embassies as bomb factories and terror cells, plotting atrocities. The mullahs have MOIS agents implanted in every European embassy.

Having failed in their efforts to bomb and assassinate their opponents in Europe and America, the mullahs have now turned their attention to the Middle East. US sanctions have crippled the Iranian economy, reducing their oil exports to almost zero and dramatically slashing the mullah’s ability to fund their proxies like Bashar al-Assad in Syria, the Houthi rebels in Yemen, the brutal Shiia militias in Iraq and Hezbollah in Lebanon. Determined to prove that they could retaliate, the mullahs instructed their proxies to sabotage ships near the Straits of Hormuz, one of the world’s most strategically important shipping routes, where one fifth of global oil supplies pass through every year. In mid-May four commercial vessels were damaged, including two Saudi oil-tankers. The ruling theocracy then used its proxies to carry out armed drone attacks on Saudi oil-pumping stations, with Iranian officials gleefully boasting that they were capable of subverting the global economy by attacking Saudi and UAE oil exporting capabilities, which the mullahs describe as ‘the storekeepers of oil’.

Next, the turbaned tyrants have instructed their Houthi allies to
fire two ballistic missiles targeting Mecca and Jeddah. Both were intercepted and destroyed by Saudi Arabia’s air force. Undeterred, the mullahs sent their top General Qassem Soleimani, commander of the terrorist Quds Force, the extra-territorial wing of the regime’s Islamic Revolutionary Guards Corps (IRGC), to meet with Iranian-controlled militias in Baghdad, where he placed them on full battle-alert and told them to prepare for a proxy war. This was followed almost immediately by a rocket attack on the US embassy in Baghdad’s Green Zone. It was a predictable reaction to the fact that the US State Department recently added the IRGC, the mullah’s version of the Gestapo, to its list of Foreign Terrorist Organizations (FTO). In a further attempt to ramp up the growing tension in the Middle East, Iran’s President Hassan Rouhani declared that his country would stop complying with two of its commitments under the Iran nuclear agreement, known as the Joint Comprehensive Plan of Action (JCPOA). Rouhani’s declaration came exactly one year to the day after President Trump’s announcement that America was withdrawing from the failed agreement.

Responding to these threats, the US deployed an aircraft carrier group and bombers to the Persian Gulf.President Trump, having insisted that he was not seeking war with Iran nevertheless tweeted at the weekend “If Iran wants to fight, that will be the official end of Iran. Never threaten the United States again!” America’s gunboat diplomacy has prompted the expected knee-jerk response from the EU. Arch appeasers of the mullahs who have decried Trump’s withdrawal from the Iranian nuclear deal and vainly sought ways of continuing to trade with the terrorist regime, the EU has now prompted a diplomatic backlash on America, denouncing Trump’s sabre-rattling and urging caution. By so doing they have played into the hands of the mullahs who are rapidly running out of options and desperately seeking allies to keep their teetering regime afloat. Guns, bombs, missiles, terror and intimidation don’t seem to bother Europe’s leaders, who like the legendary wise monkeys, see no evil, hear no evil and speak no evil.