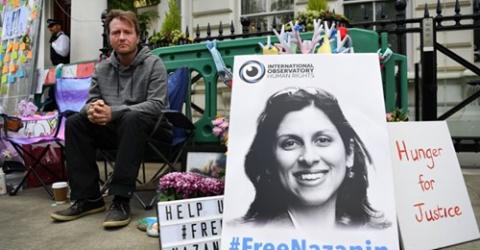 It has been a disastrous year for the theocratic dictatorship in Iran. The economy has collapsed, unemployment is pervasive, inflation is out of control, the Iranian currency is in freefall and over 75% of the 80 million population are now struggling to survive on daily incomes below the international poverty line. Professional, well-educated people who once earned a decent living in Iran can now be found scrabbling through trash cans for scraps of food. 20,000 people are sleeping rough in Tehran alone, of which 5,000 are women and children. Some people have even offered their corneas or kidneys for sale in a desperate bid to avoid starvation for their families. Due to the clerical regime’s rank incompetence over 300,000 people have died of the coronavirus.

Meanwhile, the fabulously rich mullahs, who have stolen the people’s wealth for four decades, plough endless funds into proxy wars in Syria, Yemen, Iraq, Lebanon and most recently Gaza, supplying Hamas with rockets, training and finance to prolong the war with Israel and promote the Islamic Republic as the key protagonist against the occupiers of Palestine. The foreign wars are a calculated strategy to distract their enraged and starving population from another nationwide uprising that could sweep the mullahs from power. Mass uprisings in 2018, 2019 and 2020 almost succeeded in toppling the theocratic regime, but were brutally crushed by the Islamic Revolutionary Guards Corps (IRGC), the regime’s Gestapo, while the West stood idly by offering no support for the oppressed Iranian people, who were arrested, tortured, imprisoned  and murdered in their thousands.

The ongoing clandestine project to develop a nuclear weapon and the ballistic missiles capable of launching it, are a key part of the mullah’s survival plan and have continued apace before, during and after the introduction of the deeply flawed Joint Comprehensive Plan of Action (JCPOA) nuclear deal. Even now, deluded Western appeasers are seeking to renew the deal rather than confront the mullahs for their role in exporting war and terror worldwide. Facing crippling sanctions imposed by the Trump administration and recurring international humiliations from the exposure of their diplomats as terrorist bombers and assassins, Iran’s Supreme Leader, Ayatollah Ali Khamenei is scraping the barrel for further ways to avoid a meltdown at the looming presidential elections to be held on 18th June. Khamenei and his hand-picked Guardian Council have disqualified every candidate who could have posed even a slight threat to the favoured successor to Hassan Rouhani. The chosen-one is the current Head of the Judiciary, the notorious Ebrahim Raisi, a renowned thug and ruthless executioner, who was placed on the US Treasury black list on 10thNovember 2019, for serial human rights violations. He is known to regularly attend torture sessions and the execution of prisoners. Raisi is sure to become president in the fake elections, despite a nationwide campaign to boycott the vote, by the main democratic opposition movement, the Mojahedin e-Khalq (MEK).

Terrified that the sham election of Raisi will provoke a revolution, Khamenei, true to form, has turned his attention to his traditional disruptive tactics to divert attention from his domestic crises. He has ordered the further cruel detention of dual-nationality hostages like Nazanin Zaghari-Ratcliffe, on trumped up charges. Tehran’s cyber army has been deployed to manipulate and mislead the world's politicians and public opinion, interfering in elections and peddling disinformation in fake posts and tweets on Facebook and Twitter to promote any cause that might harm the West. In March, Facebook removed 446 fake accounts that it traced back to the Iranian regime. Iranian piracy, hi-jacking and bomb attacks on tankers in the Strait of Hormuz have escalated tensions in the Persian Gulf. Now Khamenei has decided to ramp up international pressure by sending two warships to Venezuela with mystery cargoes, as a direct threat to Washington, in an attempt to burnish his hard-line credentials.

As always, when cornered, Khamenei has resorted to demonizing the MEK and the key opposition umbrella movement the National Council of Resistance of Iran (NCRI). Ludicrous and amateurish publications have begun to appear in the EU, trotting out all of the old myths, lies and propaganda spouted for decades by the mullahs and roundly debunked again and again by Western experts, governments, courts of justice and political leaders. The absurd publications contain broken English, appalling grammar, endless spelling mistakes and appear to have been designed in comic-book form by teenagers.

Rather than wasting time distributing such risible material, the mullahs would do well to address the many questions now confronting their 42 years of brutal maladministration and corruption. The UN is now actively pushing for answers to the horrifying massacre of more than 30,000 political prisoners, mostly supporters of the MEK, in the summer of 1988. Ebrahim Raisi, the incoming president, has even boasted of his role as one of the key executioners during that horrendous crime against humanity. Western governments also wish to know who, in the regime’s leadership, ordered the Iranian diplomat Assadollah Assadi, to bomb the huge NCRI rally in Paris in June 2018. Western powers also want to know who was accountable for the murder of more than 1500 unarmed protesters during the 2019/2020 uprising. There are volumes of crimes and terrorist outrages that can be traced directly back to Tehran and require explanations, so that the perpetrators can be held to account. The mullahs’ war games may turn out to be a spectacular own-goal, shining a spotlight on the theocratic regime’s role as the international Godfather of terror, a role for which Khamenei, Rouhani, Zarif, Raisi and many others will soon face justice in the international courts for crimes against humanity.