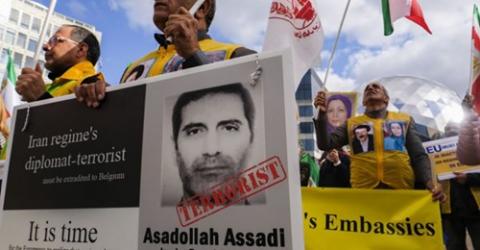 On 4th February a court in Antwerp will announce its verdict in the trial of Assadollah Assadi, a senior diplomat from the Iranian Embassy in Vienna and three other co-conspirators, on charges of terrorism. On 1st July, 2018, Assadi was arrested and charged with passing 500gms of TATP high explosives and a detonator to an Iranian/Belgian couple from Antwerp. He had passed the bomb to Amir Saadouni, 40, and his wife, Nasimeh Naami, 36 — both of Iranian origin — at a Pizza Hut restaurant in Place d’Armes, Luxembourg. Assadi had instructed them to detonate the bomb at a major gathering of the National Council of Resistance of Iran, attended by tens of thousands of people at Villepinte near Paris. A further conspirator, Mehrdad Arefani, was posted as a lookout at the rally. The event was addressed by leading politicians and senior government officials like Newt Gingrich, former speaker of the US House of Representatives, Theresa Villiers MP, former UK Cabinet minister and Stephen Harper, former Prime Minister of Canada. According to Jaak Raes, head of the VSSE, Belgium’s state security service, “The plan for the attack was conceived in the name of Iran and under its leadership. It was not a matter of Assadi’s personal initiative.” Had the bomb plot succeeded, it could have killed hundreds of men, women and children on European soil.

The Belgian trial coincides with a legal action in Sweden, where prosecutors are currently examining the case of Hamid Noury, a former torturer and executioner in the notorious Gohardasht Prison near Tehran. His trial is expected to begin in March. Noury was arrested following a tip-off in November 2019, while on a visit to Sweden. He has been accused of committing crimes against humanity during the heinous massacre of over 30,000 political prisoners in Iran in the summer of 1988. The mass executions were carried out on the basis of a fatwa by the regime’s then-Supreme Leader, Ayatollah Ruhollah Khomeini, who ordered that supporters of the main opposition People’s Mojahedin of Iran/ Mojahedin-e Khalq (PMOI/MEK), should be hanged. Even pregnant women and teenagers were not to be spared, he ordered.

Thousands of men and women who had been unfairly imprisoned for supporting the PMOI/MEK, were arbitrarily taken from their cells in jails across Iran in August and September 1988 and forced to face a ‘death committee’ of four senior officials. They were asked a single question: “Do you support the PMOI/MEK?” Those who replied “Yes’ were immediately sentenced to death and hanged within hours. Even PMOI/MEK supporters who had served their sentences and been released from prison were rounded up and executed. It was one of the worst crimes against humanity of the late twentieth century.

Shockingly, members of the death committee continue to hold key positions in the Iranian government. Mostafa Pour-Mohammadi was until mid-2017 President Hassan Rouhani’s Justice Minister. When his part in the murders became known publicly, he was replaced by Alireza Avaie, who himself was a prominent executioner during the 1988 massacre, in his role as Chief Prosecutor in the city of Dezful. Avaie has been on the EU’s terrorist blacklist for years. The head of the judiciary, Ebrahim Raisi, was one of Hamid Noury’s overseers in Tehran.

The Swedish prosecutor has taken extensive evidence from so-called ‘injured parties’, people who were directly affected by the 1988 massacre and have become plaintiffs in the trial. There are now around 30 plaintiffs, many of whom were interviewed remotely, because of the pandemic, from their location in Ashraf 3, a compound housing thousands of Iranian PMOI/MEK supporters in Albania. They were interviewed in the presence of lawyers from the Albanian state prosecutors’ office. Some of their evidence was deeply disturbing.

One plaintiff described how following his death sentence in the kangaroo court, he had been taken to what became known as the ‘corridor of death’, where hundreds of prisoners were forced to line up, sometimes for up to 6 hours, while batches of six to eight at a time were marched off to be executed. He reported how Hamid Noury had personally enjoyed abusing and insulting the prisoners in the ‘corridor of death’ as a type of psychological torture. Noury also enjoyed forcing prisoners into the execution room where they had to watch their colleagues being hanged. This particular plaintiff recounted how he had fainted at the horrific scene in the execution chamber and had then been carried back to his cell. But for this he would never have survived to give evidence against Noury.

Other survivors and family members of those executed have given equally distressing evidence to the Swedish prosecutor. Many had personally witnessed Noury’s role in the torture, execution, and repression of political prisoners. Noury was reportedly responsible for leading prisoners to the gallows and for executing some of them personally. Those hanged were buried in secret mass graves and to this day inside Iran, anyone enquiring about the fate of their loved ones or speaking about the massacre will face instant arrest and imprisonment.

A landmark report was published in 2018 by Amnesty International demanding action to hold the perpetrators of the massacre to account. Meanwhile the mullahs have gone out of their way to prevent any international investigation into this appalling crime against humanity, even concreting over sites that have been identified as mass graves. In December last year if was revealed that 7 UN Special Rapporteurs had expressed their concern that the Iranian regime has done nothing to investigate the 1988 massacre and accountability for it, in breach of their obligations under international human rights law that they have endorsed. The 7 UN Special Rapporteurs warned that if the Iranian regime continues to fail to conduct a full investigation, the UN will call on the international community to mount an independent investigation, whereby the Islamic Republic of Iran could be held to account for crimes against humanity. Amnesty International immediately published news of this letter on its website, describing it as a “momentous breakthrough”.  Amnesty said “It marks a turning point in the long-standing struggles of victims’ families and survivors, supported by Iranian human rights organizations and Amnesty International, to end these crimes and obtain truth, justice and reparation”.

It seems clear now that the combined court proceedings in Belgium and Sweden will mark an unprecedented indictment of the mullahs’ criminal regime, whose senior figures, including the Supreme Leader Khamenei, President Rouhani and Foreign Minister Zarif must be held to account. They must now be arraigned before the international criminal court in the Hague and prosecuted for genocide and crimes against humanity.