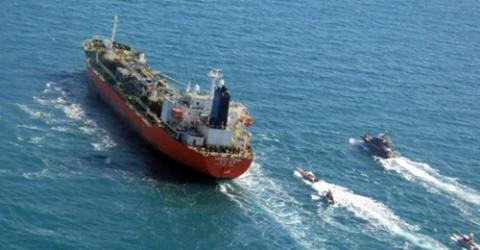 Gangsters are usually experts at blackmail, extortion and the protection racket. The criminal Iranian regime excels at all three. As the clock ticks down to Joe Biden’s inauguration as the 46th US president, the increasingly unstable theocratic regime is building up its litany of threats, blackmail and extortion, in a desperate bid to secure an end to crippling US economic sanctions. Last week, Iran’s Islamic Revolutionary Guards Corps (IRGC) seized a South Korean-flagged tanker in Gulf waters. The IRGC said they had detained the Hankuk Chemi tanker and its crew for allegedly dumping toxic chemicals in the Gulf. This blatantly false charge hid the rising tension between Tehran and Seoul over $7 billion in Iranian funds frozen in South Korean banks due to President Trump’s ‘maximum pressure’ sanctions. The vessel’s crew includes nationals from South Korea, Indonesia, Vietnam and Myanmar, who have all been effectively kidnapped and taken hostage. The tanker is being held at Iran’s Bandar Abbas port city. Unsurprisingly, the incident coincided with a proposed visit to Tehran by South Korea’s deputy foreign minister.

In the same week, explosives experts had to defuse a limpet mine attached to a Liberian-flagged oil tanker in waters off the Iraqi port of Basra.  Sailors on board the MT Pola said they had discovered a limpet mine of the type commonly deployed by naval divers. It had been attached to the side of the tanker and could have caused devastating damage had it exploded, particularly as the MT Pola was refuelling another tanker at the time with a ship-to-ship transfer to the MT Nordic Freedom, a Bermuda-flagged tanker. The sophistication and positioning of this type of weapon once again points the finger of blame at Iran, as they ramp up their threats and menaces ahead of Joe Biden’s inauguration. In 2019, the U.S. blamed Iran for a series of limpet mine attacks on oil tankers near the Strait of Hormuz, the narrow mouth of the Persian Gulf through which 20 per cent of all the world’s oil passes. As usual, Iran denied being involved.

Now, according to the Pentagon, President Trump has ordered its aircraft carrier USS Nimitz to remain in the Gulf due to “recent threats” by Iran. It had previously been reported that the ship was returning home as a sign of ‘de-escalation’. The Nimitz had been patrolling Gulf waters since last November as a warning to the mullahs’ regime, following rocket attacks on the US embassy in Baghdad and other violent events organised by the Iranians and carried out by their Iraqi proxies. US defense secretary Christopher C. Miller said “Due to the recent threats issued by Iranian leaders against President Trump and other US government officials, I have ordered the USS Nimitz to halt its routine redeployment. The USS Nimitz will now remain on station in the US Central Command area of operations. No one should doubt the resolve of the United States of America.” The Americans have also conducted B-52 bomber flyovers in the zone and sent a nuclear submarine into the Persian Gulf as a warning to the fascist mullahs.

Further signs of the Iranian regime’s attempts to frighten the incoming Biden administration into a policy of appeasement, emerged in early January. The UN nuclear inspectors announced that the mullahs had begun to accelerate uranium enrichment and were aiming to “produce low-enriched uranium up to 20% purity”, one step away from nuclear weapons grade. The regime has repeatedly boasted about its violation of the deeply flawed Joint Comprehensive Plan of Action (JCPOA) nuclear deal they signed with Obama in 2015. Despite clear evidence that the mullahs are continuing secretly to construct a nuclear device and ballistic missiles capable of carrying a nuclear warhead, the EU remain ludicrously committed to reinstating the JCPOA and look to Biden for American support. The failure to link any restitution of the JCPOA to ending the clerical regime’s destabilizing activities in Syria, Yemen, Lebanon and Iraq and insisting on an end to repression, torture and executions in Iran, has simply encouraged the mullahs to further aggressive behaviour at home and abroad. They now hope that their campaign of bullying, extortion and blackmail will force Joe Biden to rush through a policy of appeasement, removing sanctions and re-booting the Iranian economy. It would be a dangerous mistake, were he to do so.

The international community should not buckle in the face of the mullahs’ blackmail strategy and their tactic of extortion and hostage-taking which dates back to the 1980s, when the regime stormed the U.S. embassy in Tehran and took numerous hostages. The mullahs have continued to use hostage taking and terrorism to intimidate the West and achieve their goals. Iranian citizens with dual-nationality are routinely arrested on trumped up charges of spying or trying to overthrow the regime. They are then used as pawns in a sinister game aimed at putting pressure on a foreign power. The case of Nazanin Zagari-Ratcliffe, the young British mother, is typical. Nazanin is currently under temporary release from the notorious Evin Prison due to the coronavirus pandemic, but has been threatened with a new trial after already serving almost five years in jail in inhuman conditions. The mullahs are demanding the repayment of £600 million ($815m) paid by the Shah of Iran to the UK for military equipment prior to the 1979 revolution. The equipment was never delivered and Nazanin’s callous mis-treatment appears to be directly linked to this case. It is believed that at least 30 dual and foreign nationals are currently imprisoned in Iran. Their arrests are always followed by a pattern of prolonged solitary confinement and interrogation, against a background of denial of due process, denial of consular access or visits from UN or humanitarian organisations, secretive trials in which the detainee is given limited access to counsel and long prison sentences based on vague or unspecified “national security” and “espionage” charges.

The US, EU and UN must hold the Iranian regime to account for its acts of aggression. Any concessions to the theocratic dictatorship will be seen as an act of weakness by the West and will be mercilessly exploited by the mullahs. There must be no lifting of sanctions until all clandestine nuclear activity, involvement in foreign wars and domestic oppression has ended.