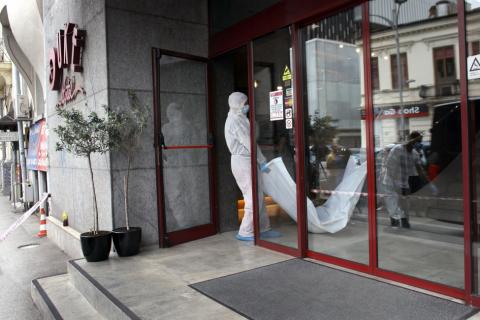 There must have been blind panic in Tehran last week when the mullahs heard that the fugitive judge Gholamreza Mansouri had been arrested in Romania on an Interpol warrant issued by the Iranian regime and after being released from custody, was under police watch in a Bucharest Hotel. Mansouri had been accused of accepting a £450,000 bribe in his capacity as a judge and the Iranian authorities were desperate to bring him back to Tehran, where he faced almost certain execution. A Romanian court on June 12 postponed the extradition of Mansouri, demanding that Tehran present documents and evidence against him. His exposure as a thief by the clerical regime surprised no-one, as almost the entire Iranian elite are venally corrupt. But Mansouri’s fate has shone some light on a murkier tale.

Mansouri fled Iran immediately after Ebrahim Raisi was appointed chief of Iran's Judiciary last year and replaced Ayatollah Sadeq Amoli Larijani, with whom Mansouri had closely collaborated. The downfall of Larijani signalled deep divisions within the theocratic regime and Mansouri clearly knew he was a marked man. When it was discovered that he was in Romania, pressure mounted from human rights activists and ex-pat Iranians in the West for Mansouri to be indicted for crimes against humanity in relation to his role in jailing dozens of journalists on trumped up charges. The mullahs feared that his appearance in the International Criminal Court in the Hague might open a can of worms. Frantic efforts began to extradite Mansouri to Iran. The Iranian authorities said that they would send a private aircraft to collect him, but the Romanian government said that no flights were possible due to the coronavirus pandemic.

As the legal arguments over his extradition intensified, a member of staff in the Duke Hotel in Bucharest, phoned the police on 19th June to inform them that a man had fallen to his death from a sixth-floor bedroom window onto the sidewalk below in an apparent suicide. It was Gholamreza Mansouri, who, with his extradition blocked, a lavish property in Turkey purchased and a fat bribe in his pocket, had no real reason to kill himself. His death bore all the hallmarks of an assassination by the clerical regime’s intelligence services, using their signature methods. In a similar case in 1999, Saeed Emami, a senior Iranian intelligence officer awaiting trial for murder in Iran, mysteriously died after allegedly swallowing hair remover while having a bath in prison! Like Mansouri, Emami had found himself on the wrong-side of a factional struggle within the ruling elite. Mansouri’s assassination also revived memories of the killing in Turkey last year of Massoud Molavi, an Iranian Ministry of Defense contractor who had defected to Turkey and set up an opposition social media site. He was gunned down in Istanbul on 14th November 2019.

The on-going assassinations should come as no surprise to international observers of the Fascist Iranian regime. In January 2013 the US Pentagon & the Library of Congress published a report entitled: ‘Iran’s Ministry of Intelligence and Security: a profile’. It made striking revelations about the extent of activities by the Iranian Ministry of Intelligence and Security (MOIS) against dissidents and in particular efforts to discredit the main opposition People’s Mojahedin Organisation of Iran (PMOI/MEK). The report stated: “According to Iran’s constitution, all organizations must share information with the Ministry of Intelligence and Security. The ministry oversees all covert operations. It usually executes internal operations itself, but the Qods Force of the Islamic Revolutionary Guards Corps for the most part handles extraterritorial operations such as sabotage, assassinations, and espionage. Although the Qods Force operates independently, it shares the information it collects with MOIS. The Iranian government considers the Mojahedin-e-Khalq (MEK) to be the organization that most threatens the Islamic Republic of Iran. One of the main responsibilities of the Ministry of Intelligence and Security is to conduct covert operations against the Mojahedin-e-Khalq and to identify and eliminate its members. Other Iranian dissidents also fall under the ministry’s jurisdiction. The ministry has a Department of Disinformation, which is in charge of creating and waging psychological warfare against the enemies of the Islamic Republic.”

In the last 41 years, dozens of assassinations have been carried out by MOIS agents in Switzerland, Italy, Germany, Austria, France and Turkey. The fact that targeted eliminations can happen virtually un-challenged on European soil should be of great concern. On 29thApril 2017, Saeed Karimian, a 45-year-old London-based Iranian TV executive and chairman of the GEM satellite TV network, was assassinated in Turkey, where his TV station had a branch. In January 2017 a revolutionary court in Tehran had condemned him in absentia to a 6-year prison term for spreading propaganda and acting against national security. In May 2017, Turkish media reported that 2 men suspected in the assassination had been arrested with fake passports in Montenegro, on their way to Iran.

On 25th March 2017, Mustufa Haidar Syed-Naqfi, a Paksitani national, was convicted in Germany of spying for Iran, specifically of searching out potential targets for attacks by the IRGC’s Qods Force. Syed-Naqfi was sentenced to four years and three months in prison “for working for a foreign intelligence service”. A spokesman for Berlin’s superior court said. The court found he had “spied against Germany and another NATO member,” France, for the Qods Force. Syed-Naqfi compiled dossiers on possible targets – namely a German lawmaker who was the former head of a German-Israeli organisation and a French-Israeli economics professor. In June 2018, Assadollah Assadi, a diplomat from the Iranian Embassy in Vienna was arrested after allegedly handing 500gms of high explosives and a detonator to an Iranian couple from Antwerp. He allegedly ordered them to drive to Paris and detonate the bomb at a major rally organised by the National Council for Resistance in Iran (NCRI) and attended by over 100,000 people. A combined operation by the German, French and Belgian intelligence services led to the arrest of Assadi and the other conspirators, all of whom are now in prison in Belgium, awaiting trial on charges of terrorism.

With such a catalogue of killings, it was something of a shock when the Prosecutor’s Office in Vaud in Switzerland, announced earlier this month that they had decided to close the file on the assassination on 24th April 1990 in Geneva, of Professor Kazem Rajavi. A prominent and respected human rights activist, Kazem Rajavi was the brother of the leader of the Iranian Resistance Massoud Rajavi and the Representative of the National Council of Resistance of Iran (NCRI) in Switzerland as well as its representative in the European Headquarters of the United Nations in Geneva. A team of 13 MOIS agents were quickly identified as the assassins, all of whom had fled back to Iran following the murder. International arrest warrants should be issued for the 13 assassins and the mullahs who ordered the killing. Appeasement of the Iranian regime must stop. Economic deals and political considerations never justify concessions to terrorism. Closing the file on Kazem Rajavi’s assassination simply facilitates and promotes more terrorism.