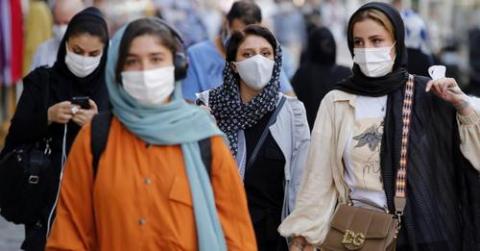 More than 311,000 people have died of Covid-19 in Iran. These are the horrifyingly accurate figures, gathered daily by the main democratic opposition resistance units of the Mojahedin e-Khalq (MEK). The theocratic regime claims the real figure is 81,000. The fact remains that the mullahs’ venal corruption and incompetence has caused a catastrophic Covid meltdown across the country, with the highly contagious Indian and South African variants now spreading like wildfire against the largely un-vaccinated population. Supreme Leader Ayatollah Ali Khamenei has banned the use of all Western vaccines, particularly those originating from America or the UK. As a result, the clerical regime has been forced to rely on intermittent supplies of the Chinese Sinopharm and Russian Sputnik vaccines. So far only 4 million people have been vaccinated. Indeed, vaccinations have been halted in Tehran and many other towns and cities as supplies have run out, after the Chinese and the Russians failed to deliver on their contracts. Reports in the state-controlled media have stated that vaccinations are no longer available in health centres and have advised that people should not approach the centres until further notice.

Iran’s hospitals are now at breaking point, overwhelmed with seriously ill victims of the coronavirus, but with few resources available to provide treatment. Hospital staff have been left without personal protective  equipment (PPE), which has been sold on the black market by officials from the Islamic Revolutionary Guards Corps, the regime’s brutal Gestapo. Now the head of Tehran City Council’s Health Committee says that “A fifth peak is quite possible, and these waves will continue until general vaccination in large numbers is realized. There are plans to prepare three new cemeteries for Tehran.”

The mullahs may seize on concerns about a fifth wave of the coronavirus as a convenient excuse to explain the probable disastrous turnout at the forthcoming presidential elections scheduled for 18th June. Khamenei has already engineered his favoured candidate, Ebrahim Raisi, into pole position to win the presidency, having disqualified all other likely contenders. But the Iranian public despise Raisi, the head of the Judiciary, as a thug and mass murderer and are well aware of his background as a key executioner during the horrific massacre of 30,000 political prisoners, mostly supporters of the MEK, in the summer of 1988. There are daily nationwide protests calling for a general boycott of the election.

The coronavirus meltdown has come as Iran’s economy goes through its worst conditions since the 1979 revolution that brought the mullahs to power. The 80 million population are experiencing appalling hardship due to the regime’s corruption and warmongering policies. The state-controlled media has even begun to acknowledge the role of the regime in destroying Iran’s economy. According to the state-run Sharq daily on May 30th, “Last year, the prices of many essential consumer goods increased by a few hundred percent.” Sharq added that based on “The latest statistics published by the Ministry of Industry, Mines and Trade, the prices of some types of livestock and poultry feed, fruits, legumes and rice, oil, live poultry as well as metal in 2020, have increased by more than 100%. The price of 41 goods has increased by 50 to 100 percent.” In a damning indictment warning of a social breakdown, on Monday, June 7th the state-run Eghtesad-e Pouya news agency stated that “The economic crisis is the result of inefficiency, both in terms of human resources and administrative factors, and also due to [the regime’s] structural contradictions.”

According to Eghtesad-e Pouya, “Huge economic projects belong to the affiliates and relatives of the main centre of power. Due to the lack of necessary conditions, they often do not finish the project or finish with extraordinary expenses and several times higher prices.  Due to the lack of necessary expertise, the national capital is wasted. These projects become a means of trial and error, and people’s capital, instead of advancing sustainable development projects, is used in proxy wars.”  The proxy wars referred to by the news agency are a source of deep resentment throughout Iranian society. It is well known that the mullahs have squandered over $30 billion in backing Bashar al-Assad’s ongoing civil war in Syria, now in its tenth year and the cause of more than 606,000 deaths so far. The clerical regime also finances the Houthi rebels in Yemen, the brutal Shi’ia militias in Iraq, the terrorist Hezbollah in Lebanon and Hamas in Gaza. In fact, Khamenei ensured that Hamas were well supplied with missiles in their recent onslaught against Israel, prolonging the bloody conflict for eight days, leaving more than 200 people dead in Israel and the occupied territories.

The nationwide uprisings and protests now involve workers, laborers, teachers, retirees and defrauded investors and point to public outrage and hatred towards the clerical regime and the people’s determination to overthrow it. Further waves of infection will have catastrophic consequences that are likely to coincide with the outcome of the fraudulent presidential elections and the emergence of the despised executioner Ebrahim Raisi as president. This could be the spark that ignites the next revolution, as the starving, impoverished and brutalized population rise up against the medieval dictatorship and seize back control of their own country.

A day of reckoning is fast approaching for the turbaned tyrants who have oppressed Iran for 40 years and turned it into a pariah state. Western appeasers, who are seeking desperately to restore the deeply flawed and now wholly redundant Joint Comprehensive Plan of Action (JCPOA) nuclear deal, should think again. Raisi will continue the deception of pretending to adhere to the conditions of the JCPOA while secretly racing to construct a nuclear bomb, to fulfil Supreme Leader Khamenei’s ambition to confront Israel and hold the world to ransom. There can be no attempts at rapprochement or conciliation with a regime that seeks to elect a mass murderer as president, brutalizes its own people and exports terror internationally. The West must now back the Iranian people and not their oppressors. The mullahs are about to discover that the greatest enemy of the dictator is the nation.