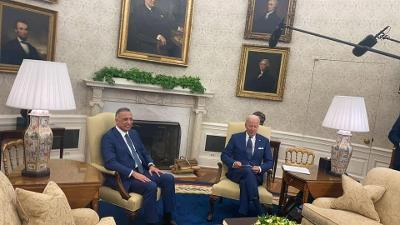 IRAQ ON THE BRINK

The parliamentary elections in Iraq on 10th October have done little to consolidate Prime Minister Mustafa al-Kadhimi’s grip on power. It was the lowest turnout in years, indicating a diminishing trust in politicians and the democratic system introduced by the Americans following the US-led invasion in 2003. It appears that the Shi’ite ruling elite have once again swept the board, with the populist cleric and former insurgency leader Moqtada al-Sadr, expanding his faction of MPs.

Kadhimi became PM in May 2020, but his brief period in office has been blighted by protests and demonstrations, against a background of rampaging corruption by the political elite. Indeed, his election in 2000 came after a nationwide uprising in Iraq in October 2019, when tens of thousands took to the streets demanding an end to corruption, the creation of jobs and the rebuilding of the country’s infrastructure, broken by years of war. Since the end of the war in 2003, it is believed that over $60 billion has been allocated to restoring electricity supplies ravaged by the conflict. But venal corruption has left Iraqis with only one or two hours of intermittent electricity a day, causing widespread anger and frustration.

The protesters blamed government incompetence, sleaze and the ruling elite’s slavish subservience to the fundamentalist Iranian regime, for the country’s collapsing economy and security breakdown. Their peaceful protests were met by gunfire from Shi’ia militia snipers, trained and armed by neighbouring Iran. Over 600, mostly young protesters, were killed and thousands more were injured. The militias kidnapped, tortured and murdered many others. The controversy forced Kadhimi to promise early “free and fair” elections with a pledge that he would implement major reforms. Free and fair elections are something of a novelty in a country where the polling stations are guarded by the militias, armed and financed by Tehran.

Two of the most brutal Shi’ia militias, al-Hashd al-Shaabi and Kataib Hezbollah, have been itching to strike out against British and American troops in Iraq since their hero, General Qasem Soleimani and their leader, Abu Mehdi Mohandes, were killed by an American drone strike ordered by President Trump, at Baghdad Airport on 3rd January 2020. Soleimani was head of the Quds Force, the extra-territorial wing of the Iranian Islamic Revolutionary Guards Corps, a listed terrorist organisation. He was one of the most vicious criminals in Iran’s history. Pretending to aid the West in their war against ISIS, Soleimani oversaw the genocidal massacre of tens of thousands of Iraqi Sunnis in the ancient cities of Fallujah, Ramadi and Mosul, leaving smoking ruins in his wake. The night he was killed, he had arrived in Baghdad to meet Mohandes, the al-Hashd al-Shaabi boss, to supervise a further crackdown on the popular protests and demonstrations that had continued in the streets of Iraq’s main cities for months. Boasting that “We know how to deal with protesters in Iran”, Soleimani had instructed his Iranian proxies to use live ammunition in a shoot to kill strategy. Many of the pro-Iranian militia leaders believe that al-Kadhimi had tipped off Trump about Soleimani’s visit to Iraq, facilitating his elimination.

Now, Joe Biden has announced that he will withdraw all US combat troops from Iraq by the end of this year. It is not clear how many of the 2,500 US military personnel still in Iraq are classified as ‘combat’ troops and whether this means that some US soldiers will remain. Nevertheless, following the shambolic American retreat from Afghanistan, Iraqis are holding their breath in anticipation of an upsurge of violence as ISIS attempts to regain its lost foothold in the country and the Iran-backed Shi’ia militias use the threat as an excuse to extend their influence and powerbase in the country.

Iraq faces a deeply uncertain future. After years of mismanagement and corruption, the country is a basket case. Its economy has been destroyed and its security devolved to pro-Iranian warlords. The collapse in oil-prices, coupled with the coronavirus pandemic have crippled the nation. Al-Khadimi’s pledge to tackle corruption and to identify and hold to account those responsible for shooting dead the hundreds of unarmed protesters during the October 2019 uprising, have yet to be fulfilled. Unfortunately, the guilty parties in both cases are the very people he looks to for support as prime minister, so he is faced with an impossible task.

Being prime minister of a failed state, ravaged by Covid-19, drained of resources by decades of venal corruption and ruled by corrupt Shi’ia warlords, is not an enviable prospect. Al-Kadhimi may have to seek the support of the powerful Shi’ite godfather Moqtada al-Sadr, who wants an end to all foreign interference in the country. He will also face tough opposition from the Fatah alliance, the political wing of the pro-Iranian militias, who demand the removal of all American troops. Iran is determined to show that it is the main power-broker in Iraq, by continuing to finance and command the ‘Popular Mobilisation Forces’ (PMF) – the umbrella group of Shi’ite, sectarian militias. The PMF is believed to have been behind a wave of assassinations of civil society activists, aimed at silencing all possible opposition to Iranian interference in Iraq. Al-Kadhimi’s government has, so far, been unable to identify or prosecute those responsible.

The newly elected Iranian president, Ebrahim Raisi, is known as the Butcher of Tehran for his involvement in the 1988 massacre of over 30,000 political prisoners. Raisi is determined to subjugate Iraq. Kadhimi has been to Tehran to meet him, but in a bid to strengthen his position further, the Iraqi PM has twice been to Washington to meet both President Donald Trump and President Joe Biden. Clearly, Washington regards the Iraqi prime minister as a viable security partner, although the Biden administration has repeatedly called on him to crack down on the hard-line, Iran-backed militias. Last week, Joey Hood, America’s most senior Middle East diplomat, called on Kadhimi to “take on those militias and bring them to justice” for the thousands of protesters killed and injured and for the assassination of civil society activists. It remains to be seen whether the parliamentary elections will change anything for Iraq’s 38 million beleaguered citizens.