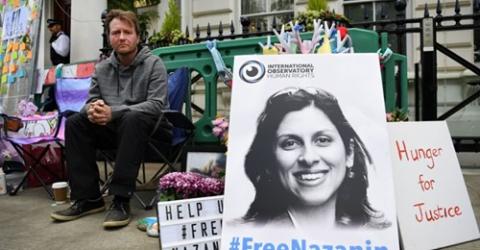 The tyrants who rule Iran clearly think it was a smart move to sentence Nazanin Zaghari-Ratcliffe, the young British-Iranian mother who had just completed a five-year jail term, to another year’s imprisonment and a further one-year travel ban. Zaghari-Ratcliffe has been falsely imprisoned from the outset and the new charge of propaganda against the regime, based on allegations that she took part in a demonstration outside the Iranian embassy in London twelve years ago, is fatuous. Zaghari-Ratcliffe’s six-year-old daughter Gabriella who lives in London with her father Richard, may not now see her mother for a further two years. But for the theocratic regime, this is a matter of no importance. Crushing an innocent young mother means everything. Humanity and morality mean nothing. The mullahs see Zaghari-Ratcliffe as a useful pawn as they try to blackmail the US, the EU and the UK into lifting sanctions and restoring the JCPOA nuclear deal.

If participating in a demonstration against the regime twelve years ago in London is seen as such a serious crime, then the mullahs should perhaps be paying more attention to the protests raging across Iran at the moment. Waves of strikes, marches, demonstrations and rallies have swept the country for months. Investors, who have seen their life-savings disappear in the stock-market crash, have joined pensioners, nurses, farmers, students and teachers on the streets daily in towns and cities throughout Iran. With deprivation now at unprecedented levels and an estimated 75% of the population trying to survive on income below the international poverty-line, the sense of universal unrest is palpable. Protesters are now carrying banners and chanting slogans calling for a boycott of the presidential elections scheduled for June. Demonstrators chant “We will not vote, we’ve heard so many lies,” as they openly vilify president Hassan Rouhani, supreme leader Ali Khamenei, and the Majlis (parliament). Interestingly, in all of the demonstrations across Iran there are no banners blaming Western sanctions. The Iranian people blame the clerical regime’s corruption and repression for their plight.

The mullahs are also accused of causing the stock market crash, which saw $28 billion wiped from shares. Ruined investors claim that they were enticed to invest in bogus schemes created by the regime in an attempt to shore up the Iranian economy and now their money has been stolen. Similar protests have taken place outside the main government-backed carmaker Azvico, where depositors who paid for new cars years ago have never received their promised vehicles. With the currency in freefall, the economy in total collapse and the pandemic claiming over 270,000 lives so far, as Iran’s underfunded hospitals are overwhelmed, the theocratic regime is facing its biggest crisis since it came to power in the 1979 revolution. Facing a renewed round of sanctions from the EU in response to the regime’s murder of 1500 unarmed protesters during nationwide uprisings in 2019, the mullahs are nervously pondering their next moves. They don’t want to exacerbate tensions in the run-up to the presidential elections and they know that more killings by the Islamic Revolutionary Guards Corps (IRGC), the regime’s Gestapo, might spark an explosive eruption of anger that could sweep them from power. But old habits die hard. Last week IRGC security forces attacked a rally of Azvico car protesters, beating up and arresting several of the defrauded customers.

In Isfahan province, 250 miles south of Tehran, 3,000 farmers have protested against the IRGC, who they accuse of diverting water for energy projects from the Zayandeh Rud River, which the farmers need for irrigating their crops. The farmers led a massive procession of more than 700 tractors and farm vehicles to voice their protest. The protesters, including many women, have threatened to boycott the elections and take away the ballot boxes unless the government addresses their demands. The regime’s justice ministry has responded by trying to ban the farmers’ demonstrations. A local MP, Mohammad Taghi Naghdali, voiced the views of the protesters. He said: “The patience of the farmers of Isfahan is running thin because of the mismanagement of Zayandeh Rud by the energy ministry. Today, Isfahan province is faced with a crisis in irrigation and potable water, and unfortunately, officials don’t listen to the people. Neither the energy minister nor other officials have any serious intention to address the problems.”

Last weekend, impoverished pensioners and retirees once again took to the streets in more than a dozen cities, including Tehran, Karaj, Kermanshah, Borujerd, Qazvin, Arak, and Ardebil. They rallied in front of government social security offices chanting anti-regime slogans, such as the challenging statement: “Our enemy is right here, they’re lying that it’s the U.S,” which served to highlight the abject failure of the mullahs’ propaganda campaign aimed at blaming the Americans for everything. They also yelled: “Our problems will be solved if there was one less embezzlement case,” referring to corruption cases involving government officials who have stolen billions of dollars from the country’s wealth. The collapse in the Iranian economy due to the venal corruption of the mullahs and their ongoing funding of attempts to build a nuclear weapon and ballistic missile delivery systems, have caused public outrage. Their squandering of billions in propping up Bashar al-Assad’s blood encrusted Syrian regime, as well as the Houthi rebels in Yemen, the Shi’ia militias in Iraq and the terrorist Hezbollah in Lebanon, have scandalized the masses.

Protesters, who previously called for government assistance to end their plight, have now turned their attention to political demands, pressing for a boycott of the presidential elections and calling for regime change. Large scale demonstrations last Sunday were punctuated by chants of “We pay our expenses in dollars, but receive our wages in rials,” reflecting the fact that the Iranian currency has lost more than 80% of its value in a matter of months, forcing a huge spike in food prices. The situation is no longer sustainable and 80 million Iranians are desperately searching for a way to oust the mullahs and restore democracy, peace and justice to their beleaguered nation.