THE GREAT BETRAYAL OF THE KURDS IN SYRIA 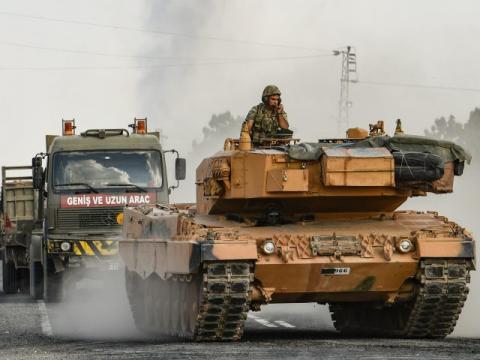 Donald Trump’s betrayal of his Kurdish allies in Syria has ignited public indignation around the world and opened a new and bloody war on the border between Turkey and Syria. The Turkish President, Recep Tayyip Erdoğan, regards the Syrian Kurds and in particular the Kurdistan Workers’ Party (PKK) as dangerous terrorists. He has vowed to drive them out of the border area with Turkey in what he claims is an act of self-defence, although in fact Turkey had never suffered any cross-border attacks by the Kurds, until the fighting began on 9th October.

But when Trump ordered the American military to withdraw from Syria, Erdoğan saw his chance and pounced. The YPG or People’s Protection Groups, as the Kurdish armed units in Syria are called, were abandoned to their fate. Having fought bravely side by side with the Americans against the brutal ISIS jihadists, they were now isolated and exposed as a huge Turkish military force blasted into Syria. The Americans were quickly replaced by Bashar al-Assad’s army and the Syrian dictator’s Russian allies. It is an historic act of betrayal by Trump that will be long remembered by the Kurds, although sadly it is simply the latest in a long list of appalling injustices suffered by them.

In several meetings I had with Masoud Barzani, the former President of Kurdistan in Northern Iraq, he never failed to complain about the way his people had been scattered across the Middle East by the Sykes-Picot Agreement of 1916. This was the infamous agreement drawn up by Mark Sykes and Francois Georges Picot during the First World War. Both were senior colonial officials acting respectively on behalf of the UK and French governments. Barzani complained that the British and French never learned the art of drawing circles. They used a ruler to draw new boundaries on a map of the Middle East, slicing through the ancient Kurdish heartlands, leaving huge swathes of ethnic Kurds in Iran, Iraq, Syria and Turkey. Millions of Kurds were displaced. The Kurdish diaspora is now reckoned to number over 40 million people worldwide, perhaps one of the greatest ethnic populations on earth with no actual homeland.

As ethnic minorities in their respective nations, the Kurds have been abused and ill-treated in each of the Middle East countries to which they were consigned by Sykes and Picot’s straight lines. Perhaps the most notorious outrage they suffered was the al-Anfal genocide of 1987/88, when Saddam Hussein supervised the slaughter of over 180,000 Iraqi Kurds, utilising ground offensives, aerial bombing, the systematic destruction of settlements, mass deportations, firing squads and chemical warfare. The campaign culminated in the horrific massacre of more than 5,000 people, many of whom were women and children, in the village of Halabja, involving an attack with chemical weapons. Hundreds of people affected by that attack still suffer from chronic illnesses to this day. The scale of Saddam’s genocidal campaign was chilling. According to Human Rights Watch, 4,000 villages out of 4,655 were razed to the ground between April 1987 and August 1988. 250 of them were attacked with chemical weapons. More than 1,700 schools, 2,450 mosques, as well as 27 churches were also destroyed.

Despite this appalling assault, the Kurdish population of Northern Iraq has remained robust. After the fall of Saddam and the resulting insurgency that saw violence and carnage rage across Iraq, it was the Kurds in Northern Iraq who provided a safe haven to the refugees fleeing from the brutal Shi’ia militias. When ISIS invaded Iraq from Syria in 2014, seizing the ancient cities of Tikrit and Mosul and shocking the world with their acts of barbarism and savagery, the Iraqi army fled, abandoning vast stores of American weaponry for the jihadists to utilise. It was the Kurdish Peshmerga who fought back, breaking the ISIS siege of Mount Sinjar where thousands of Yazidis and other displaced Iraqis had been trapped and brutalised.

Tens of thousands of Christians ousted by the Iraqi insurgency and then hounded by ISIS, fled to Kurdistan, where President Barzani and his countrymen offered them a safe haven. The ferocious Peshmerga are renowned throughout the Middle East. There are 130,000 trained and heavily armed Peshmerga soldiers and they guard the borders of Kurdistan fiercely. There have been only rare bomb or terrorist attacks in Erbil, the Kurdish capital. Although Kurdistan has some limited oil resources, their economy has been strained by the influx of refugees. Promises of aid from Baghdad have failed to materialize and the sprawling tented cities housing tens of thousands of Syrian Kurds are desperately in need of support. In 2014 President Barzani told me that he only had $500 million of monthly revenue on which to feed his own people. But he was forced to find more than $300 million every month to sustain the Peshmerga’s successful military campaign against ISIS. The Kurds have sacrificed endless blood and treasure to rescue refugees and fight ISIS, but they have been awarded only with betrayal in return.

Kurdistan is, in many respects, similar to Scotland. It is a beautiful, mountainous country with a hard-working and industrious population, which has suffered many hardships throughout history. It has its own devolved government. The newly elected president is Nechirvan Barzani, a nephew of Masoud Barzani. I met Nechirvan in Erbil when he was Prime Minister. He told me that it was pointless for the West to send aid to the government in Baghdad, because it simply caused bureaucratic pile-ups and it rarely found its way to Kurdistan. Far better that aid should be given directly to Save the Children and the other NGOs involved in the Syrian refugee crisis he said.

The west owes a great debt of gratitude to former President Masoud Barzani and to the new President Nechirvan Barzani for the protection Kurdistan has afforded to persecuted minorities and for their brave and successful fight against ISIS.  Indeed, we owe a debt of gratitude to the Kurdish fighters in Syria who stood shoulder-to-shoulder with the Americans and western allies to crush ISIS. It is to our eternal shame and embarrassment that we must now watch as Kurdish men, women and children in Syria are ruthlessly blown up and gunned down by the Turkish onslaught. It is particularly galling when President Trump, as Commander in Chief of the US military, claims that his decision to withdraw US troops from Syria was “strategically brilliant”, adding that the Kurds he had abandoned were “much safer now” and were anyway “not angels”! With friends like Trump, who needs enemies?