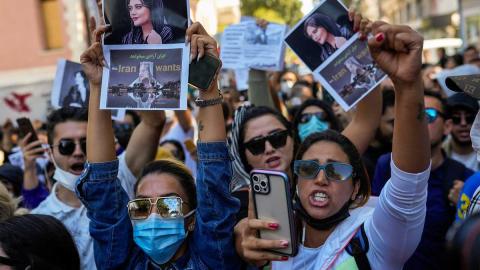 As the nationwide uprising in Iran gathers speed and heads into its fourth week, Iranians based abroad, together with tens of thousands of supporters, have rallied in solidarity in cities around the world. There have been mass demonstrations of support in 159 cities worldwide, including London, Paris, Zurich, Frankfurt, Rome, Stockholm, Oslo, New York, Montreal, Toronto, Tokyo, Brisbane, Auckland and Seoul. According to the US special envoy for Iran, Robert Malley, fifty-four countries have signed a statement “urging Iran to stop using force against peaceful protesters”. Demonstrators have expressed their outrage at the savage crackdown on protests in Iran by the terrorist Islamic Revolutionary Guards Corps (IRGC) and their Basij militia thugs, who are using batons, clubs, tear gas, bird-shot and live ammunition to try to quell the riots. Already there are reports of more than 400 deaths and at least 20,000 arrests.

The uprising, sparked by the murder of 22-year-old Kurdish girl Mahsa Amini, beaten to death by the so-called ‘morality police’ for not wearing her hijab properly, has spread to 170 cities across Iran. Truck drivers, storekeepers and municipal workers have taken to the streets and called for a general strike in support of the uprising. Students in almost every university in Iran have joined the protests, chanting "woman, life, freedom", "the mullahs must get lost" and "death to the dictator", “death to Khamenei”. Iran’s intelligence ministry has said that they have arrested “nine foreign nationals”, including from France, Germany, Italy, the Netherlands and Poland, accusing them of being “agents of foreign spy organizations” who have been helping to organize the protests. The German, French, British and Swedish embassies have been warned by the clerical regime over the involvement of their "agents" in the anti-government protests. In a dangerous escalation of the conflict, on 28th September, the IRGC launched cross-border missile and drone strikes that killed 14 people in Iraqi Kurdistan, accusing rebel groups in the region of fuelling the unrest. The US said one of its citizens was killed in the air strikes.

The nationwide uprising, involving tens of millions of mostly young Iranian men and women, from all walks of life, are the explosive culmination of four decades of simmering fury and frustration at the repression, corruption, terrorism and warmongering of the mullahs’ regime. Harsh sanctions imposed by the US, following President Trump’s unilateral withdrawal from the deeply flawed nuclear deal in 2018, have crippled the Iranian economy. The Supreme Leader, Ayatollah Ali Khamenei and his army of venally corrupt and sociopathic mullahs, are terrified that the nationwide uprising could throw them from power. The mullahs and their IRGC flunkies have wrecked the Iranian economy, financed and sustained proxy wars across the Middle East, accelerated their program to develop a nuclear weapon and sponsored acts of terrorism worldwide. With inflation running at around 53 percent, 80 million Iranians are now facing abject poverty and destitution. 60% of the Iranian population now live below the extreme international poverty line of $1 per day. They face starvation and a daily struggle to survive.

As acute poverty deepens, the corruption of the mullahs and their IRGC protectors, becomes increasingly apparent. Senior mullahs, members of the judiciary and IRGC commanders now live in excessive luxury. An overwhelming system of political patronage, nepotism, cronyism, plundering and embezzlement, sustains the elite and cripples the economy, effectively stealing bread from the mouths of the people. Iranians know that while they starve, billions of dollars are beings squandered on the covert bid to build a nuclear bomb and the ballistic missile systems required to carry it, while billions more are being spent to finance proxy wars in Syria, Yemen, Iraq, Lebanon, and Gaza.

In Iran today people rummage through dustbins searching for scraps of food. Desperate men and women offer to sell their kidneys and retinas to raise money to feed their children. The cruel murder of Mahsa Amini was the last straw; the straw that broke the camel’s back. 80 million Iranians now want rid of this sick regime. They want an end to the perverted system of velayat-e faqih, or guardianship of the Islamic jurist, which laid the foundations for the first fundamentalist Islamic state and was written into the Iranian constitution. They want rid of the fascist mullahs and the elderly, misogynistic, turbaned tyrants who have wrecked their lives for 43 years.

The people’s fight for freedom is being deftly supported by the relentless rise of the main opposition movement, the People’s Mojahedin of Iran/Mojahedin-e Khalq (PMOI/MEK), whose resistance units are now burgeoning in towns and cities across Iran and are actively involved in the day-to-day uprising. Young male and female resistance fighters have lost their fear of the thuggish goons from the IRGC and Basij and have attacked court houses, government buildings and IRGC and Basij bases. Banners, posters, and images of the Supreme Leader have been regularly defaced and torched. The ailing 83-year-old Ali Khamenei, waited more than two weeks before he made any comment on the uprising, defending the brutal crackdown by the security forces and calling for severe punishment for the protesters. He ludicrously even blamed America and Israel for fomenting the unrest. Ebrahim Raisi, Khamenei’s puppet president known as ‘The Butcher of Tehran’, has also defended the actions of the security forces and said that “chaos” will not be accepted in the Islamic Republic. Raisi was one of the foremost perpetrators of the massacre of political prisoners in the summer of 1988, which claimed 30,000 victims, 90 percent of whom were activists with the PMOI/MEK. It was his edict that the notorious morality police should tighten controls on women who were mal-veiling or displaying any hair, that led to the arrest, beating and brutal murder of Mahsa Amini. Ali Khamenei may suddenly be beginning to realize that Raisi’s sham election to the presidency was a fatal error, that may have sounded the death knell for his despotic dictatorship.

As the EU, US and UN focus their attention on the war in Ukraine, they must realize that the fight for freedom in Iran is identical. Iran is one of the leading supporters of Vladimir Putin in his attack on Ukraine and Iranian drones are being deployed by Russia to attack innocent civilians. The West must unite behind the Iranian and Ukrainian people and isolate the mullahs’ toxic regime.