EU BEGINS TO FLEX ITS MUSCLES ON IRAN 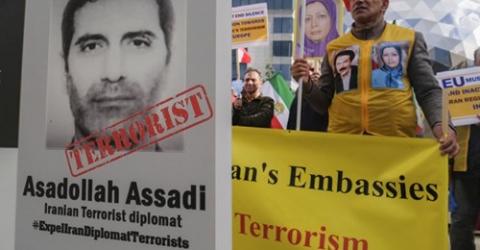 EU BEGINS TO FLEX ITS MUSCLES ON IRAN

The EU’s decision to impose restrictive measures on 8 senior Iranian commanders from the Islamic Revolutionary Guards Corps (IRGC), the paramilitary Basij and the State Security Force (SSF), has marked a new phase in EU-Iran relations. Years of European appeasement of the theocratic regime appear to have ended. All of the listed personnel played key roles in the killing and injuring of unarmed protesters during the nationwide uprising in Iran in November 2019 when over 1500 people were shot dead. The EU now seems prepared to adopt a leadership role in this matter, although having done so begs the question about further outstanding issues concerning the Iranian regime that require urgent attention.

Principal among these is the notorious massacre of over 30,000 political prisoners in Iran in 1988. Although there is irrefutable evidence of this horrendous crime, which even senior figures in the regime openly admit and boast about, no-one has yet been indicted for this horror, one of the worst cases of genocide of the late twentieth century. Now, 7 UN Special Rapporteurs have expressed their concern that the Iranian regime has done nothing to investigate the 1988 massacre and to establish accountability for it, in breach of their obligations under international human rights law that they endorsed. The 7 UN Special Rapporteurs have warned that if the Iranian regime fails to conduct a full investigation, the UN will call on the international community to mount an independent inquiry, whereby the Islamic Republic of Iran could be held to account for crimes against humanity. It seems clear that the mullahs will make no effort to mount their own investigation into this genocidal crime, which they are content to sweep under the carpet. In light of the EU’s decisive action against the key personnel involved in the 2019 killings, it’s now up to the Europeans to demand an international inquiry into the 1988 massacre.

Given the resolute action the EU has taken against the IRGC personnel, they must surely also diligently pursue the dismantling of the spy network that the mullahs have created in 22 cities and 11 EU countries in Europe. The information was uncovered by German police following their arrest of the Iranian diplomat, Assadollah Assadi, who was convicted of terrorism and attempted murder and sentenced to 20 years imprisonment in a Belgian court in February. Police revealed that they had discovered a “treasure trove” of documents in a hire car being used by Assadi. The material found in a 200-page green notebook, disclosed a sophisticated network of regime agents spread across the continent, together with plans for terror attacks using explosives, acid and toxic pathogenic substances. The notebook showed that Assadi had recorded trips, over a period of 4 years, to 289 locations across Europe to meet agents. To avoid surveillance, Assadi had dodged capital cities during most of his trips, according to the seized records, often making hotel reservations through Booking.com and occasionally reserving rooms in two different hotels simultaneously to escape detection.

Investigators additionally recovered a wealth of documentation disclosing the workings of the espionage network, including receipts of expenses reimbursements, records of monthly and quarterly spy salaries and details of computers issued to agents. The police also found six mobile phones — four of which were used to contact spies and two to make travel bookings — a laptop, external hard drives and USB sticks containing intelligence training manuals, two GPS tracking and navigation devices and more than €30,000 in cash.

German police discovered the huge cache of evidence inside Assadi’s red Ford S-MAX hire car, which he was using as a mobile intelligence unit. Along with the 200-page green jotter, they found a red notebook filled with hand-written bomb-making and fieldwork instructions. The instructions included notes on how to arm the bomb that Assadi handed to his co-conspirators, ordering them to detonate it at a mass rally of Iranian opposition supporters near Paris in June 2018. The bomb, codenamed ‘PlayStation’, was to be carefully wrapped in clingfilm with its antenna positioned in a way that prevented it from being triggered accidentally by a Wi-Fi signal.

These revelations represent an extremely serious threat to the citizens of Europe and clearly require urgent attention by the EU authorities in dismantling the network of Iranian agents,  revealing the names of those involved and seeking their arrest or expulsion from the European continent. The exposure of the Iranian spy-network in Europe should also give the Biden administration pause for reflection as they resume negotiations with Tehran over the defunct JCPOA nuclear deal. America withdrew from the deal under President Trump, who went on to impose a raft of arduous sanctions against the mullahs’ regime in a bid to end their state sponsorship of terror and their funding of proxy wars around the Middle East. Tehran has demanded an immediate end to the sanctions from the Biden administration, as a precursor to reinstating the nuclear deal. Meantime the mullahs have boasted of their breaches of the JCPOA conditions, openly threatening to accelerate their enrichment of uranium to 60% purity, a fraction short of weapons’ grade.

Such attempts at blackmailing the West into ending sanctions must be resisted by the Americans and the EU. Ending sanctions would not help 80 million impoverished and starving Iranians. On the contrary, it would release billions of dollars of frozen assets which would quickly be used to re-finance Bashar al-Assad’s bloody civil war in Syria, the vicious Houthi rebels in Yemen, the terrorist Hezbollah in Lebanon and the brutal Shi’ia militias in Iraq, not to mention the massive spy network uncovered in Europe.

The US and EU must now consolidate their strategy on Iran by listing the IRGC and the Iranian Ministry of Intelligence & Security (MOIS) as terrorist organisations, expelling their personnel, closing Iran’s embassies and arresting all of the agents revealed in the Assadi notebooks. The nuclear deal should be consigned to the dustbin of history and the leaders of the theocratic regime must be held to account for their international sponsorship of terror.