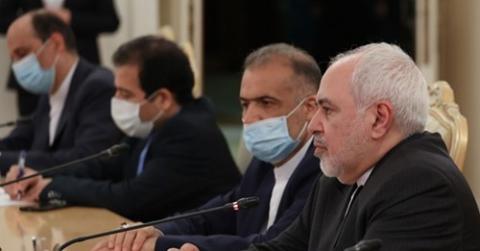 Fighting for survival, the theocratic dictatorship in Iran is now trying to negotiate a $400 billion bailout from China. As the Iranian economy tumbles and the Rial, Iran’s currency, implodes, Mohammad Javad Zarif, the regime’s hapless foreign minister, boasted to the parliament in Tehran this month that he was confident of the outcome of negotiations with Beijing. The irony is surely lost on no-one when a fundamentalist Islamic regime begins negotiating a 25-year ‘strategic partnership’ with a communist state that has imprisoned over one million Uighur Muslims in ‘so-called’ re-education camps and even jailed some for growing beards! Not since Hitler’s pact with Stalin in 1939 have two such diametrically opposed ideologies sought to work together. It is the clearest sign yet of the collapsing mullahs’ regime clutching at straws.

The autocratic Chinese government will be more than happy to hold its nose where a major business deal is at stake. Their disapproval of radical Islam and Muslims in general will be temporarily put on ice as they arrange a quarter century’s worth of discounted oil and gas imports and lucrative engineering and telecommunication contracts. As rapidly as Huawei is being dismantled and kicked out of America and Europe, it will be re-established in Iran. Of more concern will be the arrangement to share intelligence and security data, which could have grave implications for the West. Beijing has been engulfed in a bitter trade war with Washington since President Trump took office, so they will care little for American threats to penalise them for sanctions-busting in their ‘maximum pressure’ campaign against the Iranian regime.

The Iranian economy was already in freefall before the coronavirus pandemic struck. The venally corrupt and tragically incompetent president Hassan Rouhani told his 80 million beleaguered citizens to leave their homes, abandon the lockdown and go back to work. Insisting that they have managed to control Covid-19, the theocratic regime ordered schools to re-open and shops, factories, warehouses and workshops to resume operations, exposing their workers to the disease. They had the choice of either staying at home and dying of hunger, or going out to work and dying of the virus, because the regime was offering no help whatsoever in a country where over 70% live below the poverty line. The inevitable result has been a tidal wave of disease, with over 72,000 deaths and at least half the population infected with the virus.

The mullahs have lost control of the coronavirus pandemic and lost control of the Iranian economy. Having stolen the people’s wealth for 41 years since the 1979 revolution, squandering billions on the export of terror and on proxy wars in Syria, Yemen, Lebanon, Gaza and Iraq, spending billions more on their top-secret nuclear weapons programme, while stuffing bags of cash into their own private bank accounts, they are now facing a public backlash. Desperate to cling to power they sought help from Beijing.  For Iran’s Supreme Leader Ayatollah Ali Khamenei, who claims that he is God’s representative on earth, it is surely an even greater irony to see him sanctioning a pact with the devil. But an 18-page document leaked online to the Western press and dated June 2020, sets out the apparent parameters of the deal. There will be extensive Chinese investment in roads, railways, bridges, ports and infrastructure. It will, of course, increase fears of Chinese help for Iran’s nascent nuclear and ballistic missile programme, which has virtually ground to a halt recently following a series of mysterious explosions at secret military sites across the country. The deal encompasses China building the infrastructure for a 5G telecommunications network in Iran. Disturbingly, it also involves plans for military cooperation and even joint training and weapons development.

The $400 billion the Chinese will give to the mullahs if the deal goes ahead, will certainly be used to re-boot the regime’s support for the export of terror and proxy wars across the Middle East. Brian Hook, senior US policy advisor on Iran to Secretary of State Mike Pompeo, says the clerical regime has spent more than $16 billion in recent years to fund militant terrorists across the Middle East, cash that was repatriated to the Islamic Republic under the terms of President Obama’s flawed nuclear deal. Hook says that as Iran's economy teeters on the brink of collapse under the tough sanctions imposed by the Trump administration, the Islamic Republic's authoritarian leadership has spent its limited cash reserves to bolster terror groups such as Hezbollah and Hamas, as well as militant terrorists in Syria, Iraq, and Yemen. But now the injection of new cash from the Chinese will provide the mullahs with a lifeline. A US State Department spokesman said last week:  “The United States will continue to impose costs on Chinese companies that aid Iran, the world’s largest state sponsor of terrorism.”

In one part of the leaked document the text states: “Two ancient Asian cultures, two partners in the sectors of trade, economy, politics, culture and security with a similar outlook and many mutual bilateral and multilateral interests will consider one another strategic partners.” The Iranian regime has already secured the backing of President Vladimir Putin and the Russians, their malevolent allies in propping up Bashar al-Assad and his murderous civil war in Syria. The addition of China to this dangerous alliance should set the alarm bells ringing in the West.

But clearly Beijing has recognised that America is reeling from the coronavirus pandemic and its worst economic recession since the Great Depression of 1933. President Xi Jinping senses America’s weakness and feels that China will be able to withstand any penalties that Trump may impose on Chinese companies. The deal now requires the backing of Iran’s hard-line parliament, who look set to allow the Chinese dragon to enter the ancient empire of Persia.

However, Beijing would do well to take into account the negative reaction to news of the deal from the Iranian public. Social media in Iran has been swamped with a storm of denunciations by ordinary Iranians who see the deal as propping up a deeply unpopular regime. President XI Jinping should ponder the damage this will do to China’s image and the backlash that will result when the mullahs’ despotic dictatorship is finally overthrown.