DEMONIZATION OF THE IRANIAN RESISTANCE 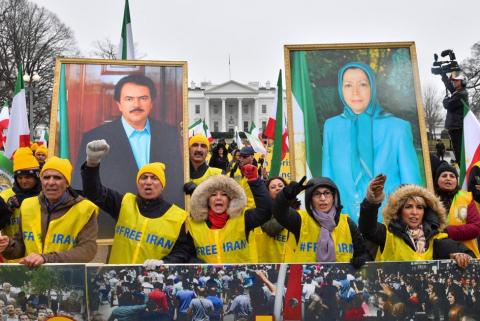 A French daily newspaper, founded by the famous philosopher Jean-Paul Sartre in 1973, is the latest to join the ignoble list of left-wing media organs to demonize the main Iranian democratic opposition movement. An article appeared on 26th November trotting out the Iranian regime’s greatest hits about the Mojahedin-e Khalq (MEK), like calling them an “Islamic-Marxist group” who “sided with Saddam Hussein” that has “been on the lists of terrorist organizations in the United States and in Europe for years.” All lies and all tired and weary propaganda that is fed into the system by Iran’s Ministry of Intelligence and Security (MOIS), a sinister KGB-style organization that actually is itself on the US and EU terrorist lists.

The MOIS maintains a bank of helpful journalists and lobbyists in the West that it unleashes at times of crisis in an attempt to demonize the MEK, who it loathes with a passionate hatred. The medieval mullahs see the MEK as the greatest threat to the continuation of their venally corrupt regime. They blame the MEK for inspiring nationwide uprisings that have erupted in Iran periodically, leading to predictable murderous crackdowns. The crisis that has inspired their most recent demonization campaign may yet prove to be the closing chapter for the mullahs. On Friday, 27th November, the day after the disparaging article appeared in France, the trial began in Belgium of Assadollah Assadi, a senior diplomat from the Iranian Embassy in Vienna and three other co-conspirators, on charges of terrorism. Assadi is the first ever serving Iranian diplomat to have been charged with terrorist offences. If he is found guilty, he could face life in prison. The trial continued on Thursday 3rd December.

The court heard how on 1st July, 2018, Assadi was arrested and charged with passing 550gms (1.21 lbs) of TATP triacetone triperoxide high explosives and a detonator to an Iranian/Belgian couple from Antwerp. He was filmed by EU security services  giving the bomb to Amir Saadouni, 40, and his wife, Nasimeh Naami, 36, at a Pizza Hut restaurant in Luxembourg. Evidence revealed by the Belgian prosecutor found Assadi had instructed them to detonate the bomb at a major gathering of the National Council of Resistance of Iran, attended by tens of thousands of people at Villepinte near Paris. A third co-conspirator, Mehrdad Arefani, who had been a ‘lookout’ at the Villepinte event, was also arrested. The rally was addressed by leading international politicians and senior government officials like Newt Gingrich, the Former Speaker of the US House of Representatives, Governor Bill Richardson, Stephen Harper, the former Prime Minister of Canada and Theresa Villiers MP, the former UK Cabinet minister.

The main target of the bomb was the MEK’s charismatic leader, Mrs Maryam Rajavi, but Assadi had instructed his co-conspirators to kill and maim as many people as possible. The Belgian prosecutor explained how the bomb attack had been carefully planned in Tehran and had clearly involved the highest echelons of the Iranian government. The attack must have been authorized by the Iranian regime’s Supreme Leader, Ayatollah Ali Khamenei and by its so-called ‘moderate’ President Hassan Rouhani. Mohammad Javad Zarif, the Iranian foreign minister, as the minister in charge of all of the clerical regime’s diplomats, would certainly have been a key party to the terrorist plot, along with the minister of intelligence & security Mahmoud Alavi and the leaders of the terrorist Islamic Revolutionary Guards Corps (IRGC) and their extra-territorial offshoot the Quds Force. All of them must now be held to account and indicted for acts of terrorism.

Having tried unsuccessfully for two years to insist on Assadi’s release, claiming diplomatic immunity, the mullahs have now instructed Assadi not to appear in court in Anwerp, citing diplomatic privilege. They have also resorted to their usual threats. Assadi himself told the Belgian police that if he was found guilty there were a number of armed groups in Iran, Yemen, Syria and Lebanon that would seek revenge. But the Belgian, French and German authorities have courageously resisted all menaces and ultimatums from Tehran. Lawyers representing the three co-conspirators told the court on the second day of the trial on Thursday 3rdDecember, that their clients accepted the damning evidence, but in mitigation stated that "the bomb was only 550gms (1.21 lbs) and not very strong!" They said their clients insisted: "Assadi told us that it will not kill anyone and he only wanted to frighten the MEK!" A verdict in the trial is expected in the early New Year.

In blind panic and embarrassment at having one of their diplomats caught red-handed in an attempt to kill and maim hundreds of innocent people on European soil, the mullahs have reverted to their traditional retaliation. Once more, they have unleashed their demonization campaign against the MEK, instructing their pet journalists to churn out the usual vitriol. Surely the Assadi trial should sound alarm bells for prominent newspapers and media outlets who pay lip-service to absurd and disgraceful fabrications about the Iranian opposition, propagated by a pariah regime that is widely recognised as a sponsor of international terror and assassination.

This latest attempt to demonize the MEK by deliberately spreading misinformation, is an effort by the theocratic regime in Tehran either to distract public attention from the Assadi trial, or, in their perverted logic, to somehow attempt to justify the bombing of the MEK rally. It is a softening up process aimed at tarnishing the image of the MEK in the eyes of the public, so that the failed attack does not inspire the same level of condemnation. The Western media who accept clandestine payments or other inducements from the mullahs’ fascist regime to publish such fabrications should hang their heads in shame. It is a sad fact that there are journalists today who ignore the truth, preferring instead to abuse and traduce the men and women of the MEK who have given up their professional careers and family life to devote themselves to the cause of ending oppression and tyranny in Iran.

The mullahs know that their days are numbered. It is therefore no surprise that they have embarked on such a frantic campaign of misinformation and demonization. But no-one will be fooled. When this evil dictatorship is toppled, history will record the names of those journalists who played this dishonest game in a roll-call of shame.

Jean-Paul Sartre said: "Every word has its consequences. Every silence, too."