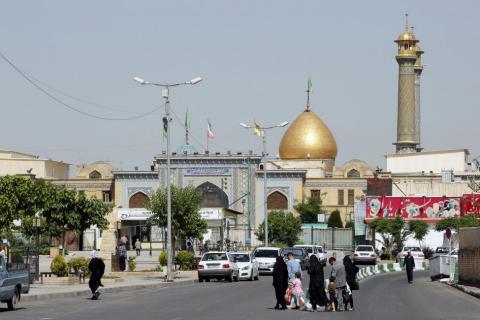 Nelson Mandela said “The true character of a society is revealed in how it treats its children.” The true character of the fascist dictatorship that rules Iran has certainly been revealed during the current coronavirus pandemic. While scientists across the world have agreed that children appear to be less vulnerable to Covid-19 than adults, in Iran, the mullahs have shamefully blamed street children for spreading the disease. There are an estimated 33,000 destitute street children, sleeping rough in Iran’s towns and cities. They range in age from 5 to 18. They are starved and abused and forced to sleep on the same streets where they try to eke out a paltry living selling flowers, gum, washing windows and grabbing any chance of menial labor to survive. But now one of the members of the theocratic regime’s parliamentary commission on health has called these child laborers “the most important source of transmission of the coronavirus.” This completely unsubstantiated accusation has exposed these vulnerable children to further hatred and abuse.

The Islamic Republic of Iran signed the UN Convention on the Rights of the Child (CRC) in 1991, and ratified it in 1994. Typically, upon ratification, the clerical regime made the following reservation: "If the text of the Convention is or becomes incompatible with the domestic laws and Islamic standards at any time or in any case, the Government of the Islamic Republic shall not abide by it." With this religious loophole as a blatant get-out clause, the Islamic Republic of Iran has repeatedly violated its obligations under the treaty and has been routinely criticized by foreign governments and international human rights organisations. Now, as the Iranian economy collapses and the country is faced with thousands, if not millions of hungry children, the mullahs have chosen to blame Iran’s street kids for spreading the virus, to deflect attention from their own rank incompetence and venal corruption.

According to accurate daily reports from resistance units of the People’s Mojahedin Organisation of Iran (PMOI/MEK), well in excess of 49,000 have died from Covid-19 so far, although the mullahs tell the world that only 8,500 deaths have occurred. Their lies, are an attempt to hide the fact that they have bungled the handling of the disease, sending supplies of personal protective equipment and ventilators to their Hezbollah terrorist allies in Lebanon and to their Shi’ia militia proxies in Iraq and selling most of what remained at huge, inflated prices on the black market, while their own doctors and nurses are left with little or no protection. President Hassan Rouhani has insisted that his government has overcome the disease and ordered people to go back to work, spreading the contagion. But the latest phase of blaming the virus on vulnerable children has plumbed the depths of the mullahs’ depravity.

A recent video recorded in Tehran by a member of the brutal Basij internal security forces, shows two terrified children, no more than 6 or 7 years old, being forced to eat the flowers they were trying to sell on the streets, including their plastic coverings. The Basij thug had apprehended the kids for illegal street trading and proudly recorded the video to post on social media, as a warning to other children against breaking the law. In the deeply disturbing film the Basij thug can be heard shouting threateningly “Eat it, eat it” at the petrified children, as they struggle to chew and swallow the plastic wrapped flowers, choking and gagging in distress. This is how the Iranian regime treats its deprived kids. The governments of most civilized nations would deem feeding any starving children as a priority. But the repressive mullahs’ regime regards them with derision as some sort of contaminant to be cleansed from the streets.

Some brave human rights activists inside Iran estimate that there are now millions of child laborers in the country. Deprived of even basic welfare, they are forced to work for a pittance to avoid death from starvation. Many children can be seen rummaging through garbage bins and landfill dumps, looking for items to eat or to sell. Iran, despite its rich, civilized and open culture, has now become an international pariah, its religious fascist regime condemned for human rights abuse and the export of terror, while its 80 million beleaguered citizens, over half of whom are under thirty, struggle to feed their families. Over 70% of the population now live at or below the international poverty line.

For a country that boasts the world’s second largest reserve of natural gas and fourth largest reserve of oil, Iran’s descent into economic chaos can be traced directly to Supreme Leader Ayatollah Ali Khamenei and President Hassan Rouhani. Their policy of aggressive military expansionism across the Middle East has seen them squandering billions on the export of terror and on proxy wars in Syria, Yemen, Lebanon, Gaza and Iraq. At home the mullahs spend billions on their top-secret nuclear weapons programme, while stuffing bags of cash into their own private bank accounts. They now face the perfect storm of an economy in freefall due to brazen corruption and mismanagement and President Trump’s ‘maximum pressure’ sanctions policy, combined with the mushrooming impact of the coronavirus pandemic.

Iran’s children are the unwitting victims of this chaos, forced to take to the streets in search of money for a day’s meagre meal, they are routinely exploited by child traffickers. Many are forced into drug use and more are sexually abused and raped, subsequently falling into life-long drug addiction. Any country’s future relies on its children and the mullahs are destroying that future. There is no fear that any of Nelson Mandela’s wisdom and vision will ever have penetrated the medieval minds of the mullahs. The only hope for the future is the rapid removal of this malevolent regime.