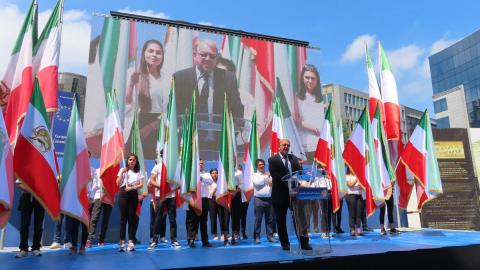 SPEECH TO NCRI/MEK RALLY IN BRUSSELS

The mullahs have mobilized their Ministry of Intelligence & Security (MOIS) agents to track down and eliminate opponents of the regime here and right around the world.It is clear that Iran uses its embassies as bomb factories and terror cells, plotting atrocities. The mullahs have Iranian Intelligence agents implanted in every European embassy.

A year ago, they tried to blow us up at our great rally in Paris. Four Iranian Intelligence agents, including one so called diplomat, are awaiting trial in Belgium on terror charges. In Albania they plotted to bomb an Iranian New Year Nowruz gathering. The Iranian Ambassador and First Secretary were expelled from the country. In America, several MOIS agents were arrested and charged with carrying out surveillance operations in preparation for assassination attempts aimed at prominent officials in the MEK. Even in Scotland, where I come from, ‘The Times’uncovered a plot by armed MOIS agents to threaten and kill anti-regime protesters in Glasgow.

The regime also spends a lot of money to spread misinformation against its main opposition members who are based in Albania. I went to meet Mrs Rajavi and the MEK members there along with two senior members of the European Parliament a few months ago and we wrote a report of our visit which has now been published as a book.

Inside Iran, the torturers and executioners are busier than ever, determined to crush all opposition under a tidal wave of fear and oppression. The abuse of human rights and women’s rights has become an international scandal; thousands of protesters have been arrested by the IRGC – the regime’s Gestapo – and they’ve been tortured and some even executed as the mullahs attempt to terrify the opposition into submission. But the Iranian people have lost their fear. Revolution is in the air, aided and abetted by brave members of the MEK, especially in the resistance units Inside the country, who risk their lives daily to bring an end to this evil tyranny and to restore freedom, justice and democracy.

The theocratic fascist regime is on its last legs. But like a wounded beast, they have been increasingly dangerous. It is incredible that when the Japanese Prime Minister Shinzo Abe went to Tehran this week to broker an easing of tension between the Americans and the Iranian regime, Khamenei and Rouhani chose the exact moment that he was meeting them to order the IRGC to blow up 2 oil tankers in the Gulf of Oman, including one owned by the Japanese. Nothing could more clearly demonstrate the contempt with which the mullahs regard international diplomacy. This is a criminal state; a state with no moral compass. This is not a state with which it is possible to negotiate.

We are standing outside the British Embassy and indeed right underneath the offices used by the Scottish representation in Brussels. Over there is the European Commission headquarters. Nearby is the Council HQ and behind that is the European Parliament. We will shortly march past the German Embassy. My message to all of them is WAKE UP! You’re your disgraceful appeasement policy and follow America’s lead by blacklisting the IRGC. America and the EU should go a step further and blacklist the MOIS. This is urgent because the mullahs are threatening our security in Europe.

We applaud the Albanians for expelling the Iranian Ambassador and his First Secretary, but now the EU must close all of Iran’s embassies and expel those terror cells from our midst. And we applaud the courage of the Iranian people who have risen up against this terrorist regime. We want them to know that they have our support and that we in Europe stand shoulder to shoulder with them in their struggle to overthrow the tyrants.