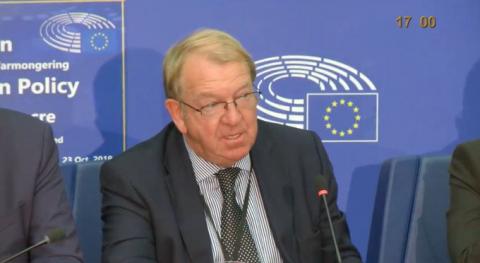 Friends of a Free Iran Intergroup

Meeting in the European Parliament, Strasbourg

We have a new Parliament and a new Commission with a new High Representative for Foreign Affairs. We need a new policy on Iran and an end to the business-as-usual, appeasement policy of the past. We need to have a clear understanding of the Iranian fascist regime, a regime that boasts about its armoury of ballistic missiles and is racing towards the construction of a nuclear bomb.

We need to recognise that this is a regime which routinely arrests, tortures and executes political prisoners, over 120,000 of whom have been slaughtered since the mullahs came to power in 1979. In the second half of 1988 alone, they hanged over 30,000 political prisoners for supporting the PMOI/MEK, in an atrocity that must rank as one of the worst crimes against humanity of the late twentieth century. The mass executions were carried out on the basis of a fatwa by the regime’s then-Supreme Leader, Ayatollah Ruhollah Khomeini and one of the key executioners during that outrage was Alireza Avaie, who is now Iran’s justice Minister, appointed by President Hassan Rouhani, whom the West regards as a ‘moderate.’

This is a regime that is oppressive to women. 97 women have been hanged during Rouhani’s ‘moderate’ presidency, including 10 this year. 270 people have been hanged in the past 12 months, 16 of them in public and 8 of them juveniles. 4,000 have been hanged since Rouhani became president in 2013. The medieval prisons in Iran are grossly overcrowded, with poor sanitary conditions and starvation rations. Prisoners with mental illness and contagious diseases like hepatitis are simply abandoned.

This is also a regime whose foreign policy is based on a strategy of aggressive expansionism. They have poured men and money into supporting Bashar al-Assad’s bloody civil war in Syria for the past 8 years. They back the vicious Houthi rebels in Yemen, the terrorist Hezbollah in Lebanon and the ruthless Shi’ia militias in Iraq. They are attacking and seizing oil tankers in the Gulf of Hormuz, firing missiles and organising drone attacks on Saudi oil installations and even using their embassies as terror cells and bomb factories.

Iran is the most repressive country in the Middle East. More than half the population of 80 million is under 30. Around a quarter of young people are jobless.

Iran is one of the most pro-Western countries in the Middle East, yet they are ruled by a clique of elderly, bearded, deeply corrupt mullahs, who have drained the country’s rich oil resources to featherbed their own lavish lifestyles and to fund their policy of Islamic international revolution. Mass protests against the fascist mullahs have continued now for almost 2 years. At least 45 people have been killed and around 2,500 have been arrested; many will now face rape, torture and even the death penalty. But the courageous protesters will not be cowed. Iran’s 80 million citizens are sick of a corrupt regime that has bankrupted their country and turned Iran into an international pariah.

The days of kow-towing to this medieval and murderous regime are over. Europe must show that we support the Iranian people and the PMOI/MEK, their main democratic opposition, in their on-going uprising and their bid to end the tyranny that they have suffered for four decades. We must show our support for Mrs Maryam Rajavi, the fearless President-elect of the National Council for Resistance in Iran and her policy of creating a republic based on freedom, democracy and a separation of religion and the state; a country that will cherish human rights and gender equality. Franklin D Roosevelt said: “Appeasement is the policy of feeding your friends to a crocodile, one at a time, in the hope that the crocodile will eat you last.” Let us not feed the crocodile.