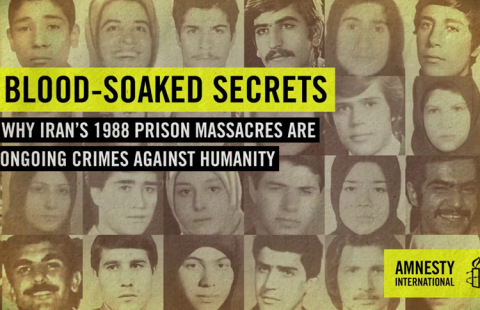 GRIM ANNIVERSARY OF THE 1988 MASSACRE

Thirty-two years ago this month, a crime against humanity began in Iran. In a tempest of savagery that has not been surpassed since the end of the Second World War, the fascist theocracy began the systematic execution of political prisoners. Within months they had hanged over 30,000 men and women, mostly members and supporters of the People’s Mojahedin of Iran PMOI/MEK, the main democratic opposition to the mullahs. They were murdered on the orders of the psychotic Supreme Leader Ayatollah Ruhollah Khomeini, a man who claimed to be the voice of God on earth, but was in fact the disciple of Satan.

Khomeini instructed that the executions should be carried out in haste and that even pregnant women should not be spared. The show trials lasted for no more than 3 minutes and consisted of the prisoners being asked the question “Do you support the PMOI/MEK?” If they answered “YES’ they were marched out to the prison courtyard and hanged in batches of six. Young men and women who had been released from prison after serving sentences for supporting the PMOI/MEK were dragged back before the summary courts, sentenced to death and hanged. The bodies of the 30,000 murdered martyrs were buried in secret graves. Their families were forbidden from speaking about their deaths.

Monstrous acts of butchery like this have become grisly milestones in the history of oppression and tyranny in contemporary Iran and even the death of Khomeini brought no respite. His successor, Ayatollah Ali Khamenei, has presided over a regime that now executes more people per capita than any other country in the world. Iran has become, in the words of US Secretary of State Mike Pompeo, the Godfather of terror, an international sponsor of terrorism. They brutally shot down and killed over 1,500 young protesters who took to the streets of Iran’s towns and cities in a nationwide uprising last November. Deploying their Islamic Revolutionary Guards Corps (IRGC) – the regime’s Gestapo, the mullahs have unleashed a homicidal blitz on their own population, crushing dissent, wantonly murdering and maiming thousands.

Four decades of rampant corruption, medieval brutality, unchecked abuse of human rights and women’s rights, together with the country’s emergence as an international pariah, have left 80 million Iranians angry, frustrated and demanding regime change. Yet, the mullahs live a life of luxury and spend billions of euros supporting Bashar al-Assad’s brutal civil war in Syria and on funding Hezbollah and other terrorist groups like the vicious Shi’ia militias in Iraq and the Houthi rebels in Yemen. Many of the key executioners during the 1988 massacre now hold senior positions in the fascist dictatorship.

Why, after 32 years, has no-one been held to account for this horror? The 1988 massacre of political prisoners in Iran is an example of both a crime against humanity and a genocide. Based on international conventions, neither crimes against humanity nor genocide are allowed to expire with the passage of time.

At a time when the Iranian people have shown with their consecutive and nationwide protests that they are sick of the current regime and the ongoing violation of human rights, it is surely the duty of the international community and the United Nations to respond by supporting their call for justice. With the UN General Assembly due to take place in September, the Iranian people are now watching closely. They are appalled that the UN has removed the 1988 massacre from their agenda. This item must be discussed. Failure to do so would represent the UN condoning murder.

It is the duty of the UN to examine this case and bring its masterminds and perpetrators to justice. The time has come to pull down the curtain on this murderous regime. The mullahs must be held to account in the international criminal courts. After 41 years of tyranny, the Iranian regime’s time is up. The mullahs and their Supreme Leader Ayatollah Ali Khamenei must now face justice.