EU-IRAN BUSINESS FORUM IS A SURRENDER TO TERRORISM 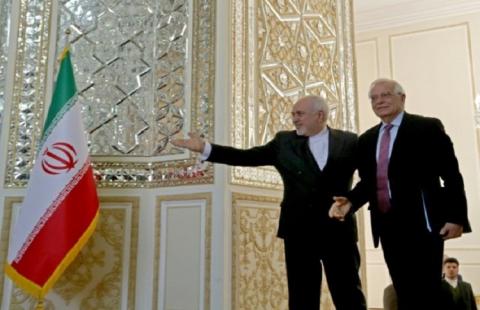 PROPOSED EU-IRAN BUSINESS FORUM IS A SURRENDER TO TERRORISM

It seems that the EU’s High Representative for Foreign Affairs and Security, Josep Borrell, wishes to ignore the terrorist bomb plot that could have killed hundreds on European soil. It seems, from his silence on the Assadollah Assadi affair, that Mr Borrell is intent on business-as-usual with the criminal Iranian regime. Now he has even invited one of the Godfathers of terror, Javad Zarif, the Iranian foreign minister, to participate in the Europe-Iran business forum that he has organised to take place from 1-3 March. Borrell has even kindly agreed that the EU should pay for this business-as-usual forum.

We heard during the Assadi trial in Antwerp that the former Iranian diplomat also faces further terrorist charges in Germany. When he was arrested in Bavaria by German police, they found a notebook in his car which contained details of the bomb plot and the money paid to his co-conspirators. It also contained information about 289 visits Assadi had made to different countries, 144 of which were to meetings in Germany, indicating that Assadi was supervising terrorist activities across the EU and Germany was clearly the epicentre of his spy network. There are undoubtedly bomb attacks and assassinations being planned by spy-cells across Europe right now, supervised and directed from Tehran. But for Josep Borrell, it must be business-as-usual!

Maybe the business he has in mind is to invite Javad Zarif to send another of his diplomats to Europe on a commercial flight with a primed bomb in his diplomatic pouch. Maybe next time the EU intelligence services will not be so lucky and Zarif’s diplomat will be able to launch a deadly attack. Will Mr Borrell attend the funerals of the men, women and children killed and console their families and friends? Will he visit those maimed and disabled in hospital?

Maybe Mr Borrell wants European companies to help Iran in its clandestine programme to produce a nuclear weapon and the ballistic missiles capable of delivering such a device? Or maybe he wants to see EU companies delivering more truck-mounted cranes to the Iranian regime, so that they can accelerate the public hangings that have catapulted them to top of the world’s capital punishment list of executioners?

The news this week of serious protests that have taken place in the city of Saravan, in one of the most deprived provinces in Iran, Sistan & Baluchestan on the border with Pakistan, should have shaken Mr Borrell to the core. Using truck-mounted machine guns, the Islamic Revolutionary Guards Corps (IRGC) and border guards have shot dead more than 40 unarmed protesters and critically injured over 100. The city is ablaze. One would have thought that this news alone would have encouraged Borrell to cancel his business forum. But he remains silent. He appears determined to move the EU one stage further than appeasement. He is now hellbent on abject surrender to the terrorist regime.

I have a suggestion for Mr Borrell and his European External Action Service (EEAS). Instead of a 3-day business forum with the Iranian regime, why not hold a 3-day conference to highlight the oppression, rampant human rights abuse and escalating number of executions taking place inside Iran. Why not hold a 3-day conference to discuss the mullahs’ aggressive warmongering in Syria, Yemen, Iraq and Lebanon? Why not hold a 3-day discussion on the massacre of over 30,000 political prisoners in Iran in 1988, now the subject of a UN special inquiry? Why not discuss the 1,500 unarmed protesters who were gunned down by the Islamic Revolutionary Guards Corps (IRGC), the regime’s Gestapo, in the nationwide uprising which erupted in every town and city in Iran in 2019?

If Mr Borrell allows this business forum to go ahead, he will be sending the clearest possible signal to the fascist regime in Tehran that as far as Europe is concerned, trade matters more than human rights. Terrorism and brutality can be ignored, so long as EU businesses can make money. EU jobs mean more than Iranian lives. This is a tragedy and a complete surrender to the most criminal regime in the world today. No EU business should even consider trading with this fascist regime. Ronald Reagan famously said “If history teaches us anything, it teaches that simple-minded appeasement or wishful thinking about our adversaries is folly. There is no security, no safety, in the appeasement of evil.”