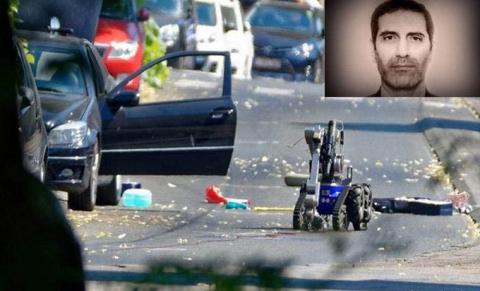 THE SCALES OF EU JUSTICE TIP AGAINST IRAN

When a Middle Eastern country orders one of its diplomats to bomb an opposition rally in Europe, prepares the lethal device, sends him to the EU on a commercial airliner with the bomb in a diplomatic bag, what should the West do? This is not some sort of Holywood fantasy, it is reality. We’ve just heard the sentence passed by a Belgian Court on Assadollah Assadi, the Iranian diplomat, and his three Iranian co-conspirators who were involved in the plot to kill and maim hundreds at a mass rally of the National Council of Resistance of Iran (NCRI) attended by tens of thousands at Villepinte near Paris in June 2018. All four have received long jail terms for terrorism. I was a plaintiff at the trial along with many other supporters of the PMOI/MEK. Today’s court ruling is a great victory for the NCRI and their charismatic leader, president-elect Mrs Maryam Rajavi. It is a great victory for the PMOI/MEK and their front-line team in Ashraf 3. The court’s verdict will be of enormous significance and a huge morale booster for the courageous resistance units throughout Iran, who can now see the tyrannical mullahs’ regime exposed and held to account in a European court of justice.

The clerical regime has a history of deploying its assassins in the guise of diplomats and using their embassies around the world as bomb factories. Since seizing power in the 1979 revolution, the theocratic regime, whose main contribution to the world has been Islamic fundamentalism, has ruthlessly bombed and shot its opponents around the globe, while torturing and executing political prisoners at home. But this is the first time a diplomat has been caught red-handed and jailed for acts of terror.

It must surely mark a turning point in relations with the mullahs’ regime? There can be no return to business as usual. There can be no more arguments that diplomacy is the answer.The arch criminal and Supreme Leader Ayatollah Ali Khamenei, together with his senior ministers like President Hassan Rouhani, foreign minister Javad Zarif and Minister of Intelligence Mahmoud Alavi, ordered the spying, the bomb plots and the assassinations. They must be held to account.

It is time for a complete change of direction in US, EU and UN policy towards Iran. The people of Iran expect the West to be on their side. They expect their calls for democracy to be taken seriously. Human rights and women’s rights cannot be compromised or marginalized on the pretext of political considerations, trade deals or the flawed nuclear agreement. The appeasement policy, lamely followed by the EU and its top diplomat Josep Borrell, is dead in the water. It is high time the West realized that the peace they have bought with appeasement is only temporary and the price they have paid has been freedom and democracy for the people of Iran. Now, following the Antwerp trial, the EU will have to reassess completely its relationship with the criminal mullahs’ regime.

The verdict in Antwerp today proves what we have known all along. The Iranian people are being governed by gangsters who will not hesitate to assassinate, bomb, maim, torture and kill their opponents at home and abroad. The only way to restore peace, justice, democracy and freedom to the people of Iran, and to the Middle East and the world, is to remove them from power and indict them for crimes against humanity in the international courts of justice. It is for this objective that I support the main opposition movement, the PMOI/MEK and their brave supporters in Ashraf 3 and inside Iran. Today’s great victory is only the start. The mullahs are finished.