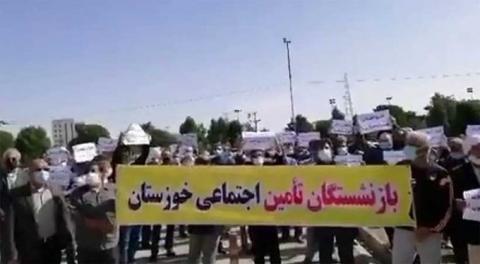 IRAN’S PENSIONERS RISE UP IN ANGER

For the past two months, tens of thousands of impoverished pensioners have poured onto the streets in towns and cities across Iran, angrily protesting about spiralling prices, disintegrating living conditions and a collapsing economy. They have crowded outside government buildings and social security offices demanding answers. But rather than attempting to resolve their grievances, the theocratic regime has reacted in its customary way, sending in the State Security Force (SSF) to crush the protests. Many of the elderly protesters have been beaten up by the SSF and dozens have been arrested. Leaflets, banners, placards and mobile phones have been seized and concrete barriers have been erected outside government offices, as the clerical dictatorship struggles to control the popular uprising.

The pensioners have had to brave the pandemic which has raged across Iran, killing an estimated 230,000 people, while the mullahs claim a death toll of 60,000. The theocratic regime’s incompetence in dealing with the coronavirus has been shocking. The pandemic has overwhelmed hospitals in Iran’s fragile health service, leading to the surging death toll. Meanwhile, to hide the appalling truth about the coronavirus, the government has ordered that death certificates are falsified to claim that victims died of other causes.

The clumsy attempts at cover-up and deception by the Iranian regime are aimed at hiding the fact that they have failed to take any effective preventive measures to deal with the spread of the virus, including the quarantine of cities where the infection was raging. The Supreme Leader Ayatollah Ali Khamenei even ridiculed the disease and farcically blamed the Americans for what he called “a biological attack.” The Islamic Revolutionary Guards Corps (IRGC), who control over 70% of the county’s economy, have channelled almost all the available funds and medical resources, including protective masks and clothing, to the regime’s officials and to its own military personnel. Even doctors and nurses who are at the forefront of fighting the disease in hospitals, have no proper medical supplies, PPE and protective suits. Specialist equipment supplied by the World Health Organisation has been sold on the black market by the IRGC.

But Iran’s 18 million pensioners have had enough. They saw their sons and daughters murdered by the IRGC during the nationwide uprising in November 2019, when over 1,500 young men and women were shot dead and thousands more were critically injured. Over 20,000 were arrested, many of whom have been tortured and sentenced to long terms of imprisonment. Dozens have been executed. The pensioners have watched while the clerical regime sponsored proxy wars in Syria, Yemen, Lebanon and Iraq, spending billions on terrorist militias while the people of Iran starved. They have witnessed the venal corruption of the mullahs, who live in luxury, while 96% of the population now live in abject poverty, struggling to survive on incomes significantly below the international poverty line. They have looked on in disbelief as the mullahs accelerated their bid to build a nuclear weapon, spending billions on advanced uranium enrichment facilities and the construction of ballistic missiles systems.

Now, with unemployment soaring, Iran’s pensioners have been sickened by news of the murder of 40 fuel-porters in the city of Saravan in Sistan Balluchistan Province on the Pakistani border. The destitute fuel porters were trying desperately to earn a meagre living to help feed their families, by carrying small amounts of fuel from Iran to Pakistan. When the IRGC blocked the main road to Saravan with chains, it left the fuel porters stranded without food or water. As crowds gathered to protest they were machine-gunned by the IRGC.

The slogans of retirees in the on-going rallies and marches spell out their fury: “Our enemy is right here, they lie that it’s America,” “Enough empty promises, our tables are empty,” “Our tables are empty, while you (regime officials) live well-off, enough oppression,” “The nation has never seen so much injustice,” “inflation rate is based on the dollar, our salaries are in rials,” Ordinary workers make the equivalent of $100-$150 a month, one-third of what they earned three years ago before the US imposed sanctions. According to the Vice Chairman of the Social Welfare Organization's Board of Directors, Ali Heidari, an estimated 7 million in Iran are not covered by any pension schemes. The Iranian government has not announced poverty figures for the past few years. The only semi-official figure is a monthly income of 45 million rials (roughly $220) for a family of four. It is believed that the vast majority have to survive on much less.

Protesters claim that they are being paid far less than government and military pensioners and they are demanding increases in line with inflation, currently running at 41.2 percent, according to World Bank estimates. As the national currency collapses, food prices have spiralled, with many items tripling in price sometimes overnight. Millions of Iranians can no longer afford to buy meat, vegetables and fruit.

Resistance units, which have been formed by supporters of the National Council of Resistance of Iran (NCRI) and the Mujahedin-e Khalq (MEK/PMOI) in every town and city, are now urging young people to show solidarity with the pensioners by joining their protests. The NCRI President-elect Mrs Maryam Rajavi has called on the UN and human rights organizations to demand the immediate release of detainees. It is clear that there is now a vast army of Iranians, numbering tens of millions, starving and marginalized by the fascist dictatorship of the mullahs. It is like a bubbling volcano, ready to erupt in a fury of revolution. The state-run daily newspaper Jahan-e-Sanat, reported on February 28: “The scope of the consequences of this bomb will not know friend or foe. If, as a result of the negligence of the country’s rulers and underestimating this potential and terrible danger and their negligence in reducing the class gap in society, this timebomb explodes, nothing will be left of us.”