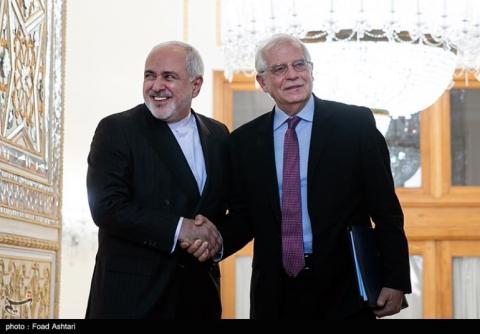 The European Parliament discussed the EU’s ‘Annual Report on Human Rights & Democracy in the World’ for the year 2019, at its plenary session in Brussels this week, following a statement by Josep Borrell, the High Representative for Foreign Affairs & Security. The report’s statement on Iran has been slammed by Struan Stevenson, Co-ordinator of the Campaign for Iran Change. Speaking from his home in Scotland Struan Stevenson said:

“The EU Human Rights Report contains a single page on Iran. A pathetic 430 words are devoted to outlining, in mealy-mouthed terms, the shortcomings of one of the most repressive and murderous regimes in the world. The report claims that: “The EU continued to address human rights issues and concerns with Iran during bilateral meetings, including at high level”. Yet we know that, shamefully, the very first high-level meeting undertaken by the EU’s Top Diplomat - Josep Borrel – was to Tehran on Monday 3rd February this year, when he met with President Rouhani, the regime’s Foreign Minister Javad Zarif and the Iranian parliament’s Speaker, Ali Larijani.

“In his press release Borrell made no mention of human rights concerns and no mention of the regime’s shooting down of a Ukrainian airliner with the death of all 176 passengers. Nor did he mention the murder of 1,500 protesters and the detention of 12,000 other innocent and defenseless people in the nationwide November uprising in Iran in 2019. He also failed to mention the regime’s cover-up of the 1988 massacre of political prisoners and to identify those executed and their graves, an issue that is now under investigation by the UN.

“Borrell could also have raised the theocratic regime’s terrorism, where, in recent years, they have often used their diplomats and intelligence agents to target political opponents in France, Albania, Denmark, the Netherlands and other countries. He could have called on Rouhani and Zarif to reveal those commanding and directing the attacks. He could, in addition, have raised the regime’s sponsorship and active involvement in the export of terror and proxy wars in Syria, Yemen, Iraq, Lebanon and Gaza and its aggressive attacks on international shipping in the Strait of Hormuz.

“Borrell’s failure to raise any of these issues in Tehran gives the lie to the EU Human Rights Report’s assertions that they address such matters in high-level bilateral meetings. Indeed, Borrell has further compounded his errors and omissions by this week criticizing the UK, France and Germany in response to a letter from Javad Zarif, in which these countries are censured for failing to adhere strictly to the JCPOA nuclear deal. For Borrell to take the Iranian regime’s side and to reprimand three major European nations regarding the flawed nuclear deal is simply outrageous and beggars belief.

“Borrell has now clearly positioned himself as the EU’s appeaser-in-chief. He should realize that his kow-towing to this evil dictatorship will simply embolden them to conduct even more repression and human rights abuse.”