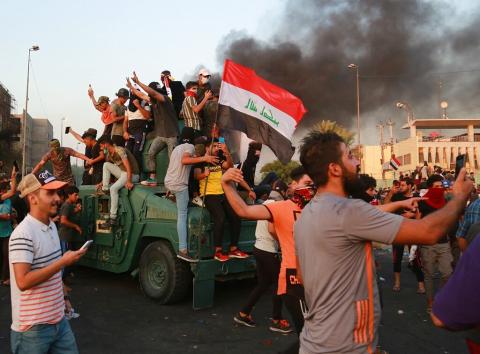 Mass protests in Iraq are continuing despite a vicious crackdown that has left 231 people dead, many of them shot by snipers and gunmen from the Hashd-al-Shaabi militia. Hashd-al-Shaabi is financed and run by the Iranian regime’s Islamic Revolutionary Guards Corps (IRGC) who control the ‘so-called’ popular mobilization units inside Iraq. The protests involving school and university students and unemployed workers, have largely involved the Shi’ite Arab communities in Iraq’s main cities of Baghdad, Basra, Najaf, Karbala and Nasiriyah. Most Sunnis in Iraq have stayed away, although they sympathise with the protesters, for fear of sparking renewed sectarian conflict and accusations of a Baathist revival. The post-sectarian protests are about government corruption, lack of jobs, poor services and the interference in Iraq of the Iranian regime.

The crackdown on the protests has been ordered by Tehran. Indeed, the snipers and gunmen are from hit squads deployed on the orders of Qassem Soleimani, the commander of the IRGC’s elite Quds Force, with the aim of intimidating opponents of Iranian meddling. Soleimani has exploited his involvement in the ousting of Daesh (ISIS) from Iraq to tighten Iran’s grip over its neighbour. Iran financed and Soleimani commanded the Iraqi popular mobilization force during the conflict with Daesh, supervising abductions, summary executions, beheadings, torture and the forcible displacement of thousands of Sunni Iraqi civilians in areas recaptured from the Islamic State. Iran then ensured that their preferred choice of Prime Minister was elected. Adil Abdul-Mahdi, an out-and-out puppet of the Iranian regime, has held that post for the past year.

Mahdi is the most recent in a long line of puppet Prime Ministers controlled by the mullahs in Tehran, stretching back to Nouri al-Maliki’s sham election in 2006. Maliki, who still retains the role of Iraqi Vice President, is the Godfather of the current gangster class of politicians. He was shoehorned into power in 2006 at the insistence of the Iranian regime and with the meek acquiescence of the Americans. His venal corruption and policy of aggression against Iraq’s Sunni population catapulted the country into civil war and opened the door for the invasion of Daesh and their subsequent seizure of vast tracts of Iraqi territory. Maliki still uses the enormous wealth he accumulated during eight years in office to finance his own private army and to undermine his political opponents.

He was succeeded by Haider al-Abadi in 2014. Abadi, another puppet of the Iranian regime, oversaw the splintering of Iraq as the army collapsed and Daesh seized almost one third of Iraq’s geographical territory, including the ancient cities of Tikrit, Mosul, Fallujah and Ramadi. This was the opportunity the Iranian mullahs were waiting for. They sent Qassem Soleimani to organise the defeat of Daesh and the genocidal liquidation and ethnic cleansing of hundreds of thousands of Iraqi Sunnis. In a last-ditch attempt to hold onto office in the May 2018 elections Abadi tried to suck up to the Americans by throwing his weight behind the re-imposed US sanctions on Iran. This enraged the mullahs and the move backfired spectacularly with Iran mobilizing all of its Iraqi supporters to replace Abadi with the much more compliant flunky Adel Abdul Mahdi. Mahdi is a weak and corrupt politician, who exploited his previous position as oil minister from 2014-2016 to feather-bed his political cronies from the Islamic Supreme Council of Iraq, a virulently pro-Iranian party.

Mahdi has made no attempt to rebuild the ancient Sunni enclaves destroyed by Soleimani. Nor has he sought to restore Iraq’s crippled infrastructure, where power outages lasting for hours every day are commonplace even in Baghdad. Iraq is not a poor country. It boasts the world’s fifth largest proven oil reserves and its landmass covers a vast ocean of gas. In addition, Iraq is one of the most fertile Middle Eastern countries. It is the only country in the region that has plenty of water with two of the biggest rivers in the Middle East, the Tigris and the Euphrates, carving through its territory. Iraq’s problems stem from venal corruption and Iranian meddling. According to the Iraqi Commission of Integrity (CoI), Nouri al-Maliki robbed the Iraqi people of their oil wealth, siphoning off a staggering $500bn (£327bn) during his term in office between 2006 and 2014. The CoI report stated that nearly half of the Iraqi government's revenues during that eight-year period were "stolen" by Maliki. This was corruption on an industrial scale.

Maliki’s successors have not been slow to bury their snouts in the financial trough. According to Transparency International, Iraq is now considered as the most corrupt country in the Middle East and the third most corrupt country in the world. But despite this OPEC member country's vast oil wealth, many Iraqis live in poverty or have limited access to clean water, electricity, basic healthcare and education. As a result, the political situation in Iraq is precarious. Adil Abdul-Mahdi is losing his grip on power, as is Moqtada Sadr, the leader of the Sadrist Movement and one of the most influential politicians in Iraq. Sadr knows that the Iraqi people want to see Iran’s agents and proxies kicked out of the country and he is keen to help them achieve that objective. However, he is also very concerned that in doing so he may suffer the same fate as his father, the Shi’ite scholar Mohammad Sadeq al-Sadr, who was assassinated by the Iranian regime. He is not the only one that fears the Iranian regime - the Iraqi people do too, but now they have overcome their fear and turned it into anger.

Corruption has brought Iraq to its knees and sparked the nationwide protests that the Iranian regime is trying to crush.  But the protesters will not be cowed by bullets and tear gas. They are demanding an end to corruption and the restoration of freedom, dignity and justice. They demand the overthrow of the government, the suspension of the constitution and the expulsion of the Iranian agents and proxies. They want an emergency government to be created that can wage a major onslaught against the criminal political classes and bring them to justice. They want to root out the senior government ministers, military chiefs and religious leaders who have robbed Iraq of its oil riches.

The massive pressure now being applied to the Iranian economy by the United States is forcing the mullahs into a tight corner. Their support for Bashar al-Assad’s bloody civil war in Syria and for the Houthi rebels in Yemen, Hezbollah in Lebanon and Hamas in Gaza is no longer sustainable. America must now help the Iraqi people to evict Iran from their country. Only by ending Iran’s attempts at aggressive expansion  and hegemony in the Middle East, will the mullahs’ stranglehold finally be undone.