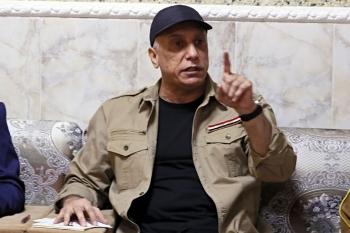 IS IRAN’S STRANGLEHOLD ON IRAQ BEGINNING TO FALTER?

Is the tide beginning to turn in Iraq? After almost three decades of conflict, insurgency, genocide and foreign meddling, there may be a glimmer of light beginning to appear at the end of the long, dark tunnel. Iraqis must hope that it isn’t an oncoming train! Iraq’s new prime minister, the former spy chief, 53-year-old Mustafa al-Kadhimi, is unique. He appears to be the first Iraqi to hold the top job who cannot be accused of being an Iranian puppet. But this may yet turn out to be his Achilles heel.

As a lawyer and journalist  who opposed Saddam Hussein, al-Kadhimi fled from Iraq in 1985 and continued to pen articles attacking the Iraqi dictator from his exile first in Iran, then in Germany and the UK. He returned to Iraq after the US invasion in 2003 and was appointed as head of the National Intelligence Service in 2016. He is resolutely pro-Western, shrewd and secular and his appointment as prime minister reflected the growing public contempt for the Iranian mullahs’ meddling in Iraq.

After years of mismanagement and corruption, Iraq is a basket case. It was a soft target for Tehran, which quickly took control of the plethora of Shi’ia militias, training, arming and moulding over 150,000 of them into the so-called Popular Mobilization Forces (PMF). Commanded by General Qassem Soleimani, the Iranian chief of the Islamic Revolutionary Guards Corps’ Quds Force, a listed terrorist organization, the PMF began a systematic campaign of genocide against Iraq’s Sunni population.

Under the guise of helping the west to fight ISIS, Soleimani supervised the destruction of the ancient Iraqi cities of Fallujah, Ramadi and Mosul, murdering thousands of innocent Sunni civilians and leaving smoking ruins in his wake. Answerable directly to Iran’s Supreme Leader, Ayatollah Ali Khamenei, Soleimani’s objective was to turn Iraq into an Iranian province, as a perfect conduit for the supply of Iranian military personnel and arms to Bashar al-Assad in Syria and Hezbollah in Lebanon.

Soleimani’s death in January this year, following an American drone attack on his car as he left Baghdad Airport, has brought the mullahs’ campaign to a shuddering halt. Soleimani had arrived in Iraq to supervise the on-going crackdown on nationwide protests that had been raging for months. Tens of thousands of young, unarmed protesters were demanding an end to government corruption and the ousting of Iranian gangsters from Iraq. Boasting that “We know how to deal with protests in Iran”, Soleimani had instructed black clad and masked PMF snipers to fire from the roofs of government buildings, killing 500 and injuring more than 15,000. The PMF leader, Abu Mahdi al-Muhandis, was killed alongside Soleimani in the drone attack. The mullahs swore revenge and, in their hysteria, shot down a Ukrainian airliner killing all 176 passengers and crew, after it was mistaken for an American military aircraft.

Soleimani’s role as Quds Force chief has been filled by 62-year-old Brigadier General Ismail Ghaani. While the Arabic-speaking Soleimani was revered and feared by his troops for his vicious ruthlessness, his dull and uninspiring successor, Ghaani, who has to rely on a translator each time he visits Baghdad, has no such rapport, further undermining Iran’s authority in Iraq. Having pledged to identify and hold to account those responsible for shooting the unarmed protesters, the new Iraqi prime minister Kadhimi is watching Ghaani closely. He has even forced Ghaani to apply for a visa each time he visits Iraq, which is something Soleimani never had to do.

The theocratic regime in Iran now regards Kadhimi with great suspicion. Some even believe he may have tipped off the Americans about Soleimani’s travel arrangements, triggering the drone attack. Kadhimi denies this and claims that he is not anti-Iranian, simply fed up with their constant meddling in Iraq. But demonstrating his determination to hold Iran to account, he ordered the arrest in July of 14 members of Kataib Hezbollah, one of the most ardently pro-Iranian militia factions of the PMF. Although all of those arrested were subsequently released, it served as a useful warning shot across the mullahs’ bows. Kadhimi is going to play hardball! He has promised to root out those responsible for shooting the protesters and he has pledged to set up an anti-government-corruption inquiry. These steps are widely popular with the Iraqi masses, but less so with the Iraqi political elite and their Iranian paymasters.

Presiding over an economy that has been destroyed by years of conflict and corruption and a security system that has been hi-jacked by pro-Iranian warlords, will be no easy task. The collapse in oil-prices, coupled with the coronavirus pandemic have crippled the nation. Unlike previous Iraqi leaders, Khadimi has no political party he can call on for support in times of trouble. However, Iraq’s dire financial position means that he has to rely on Washington for economic support, warning his MPs that if they fail to back his reform package, President Trump may pull the plug on future funding. So far this seems to be his sole ace card and with his popularity ratings rising, even the mullahs have been forced to hold their tongues.

But the easing of the Covid-19 lockdown measures, combined with the soaring summer temperatures have brought a handful of demonstrators back onto the streets of Baghdad. Violence erupted as Iraqi police tried to clear Tahrir Square where over 20 protesters had gathered and two people were killed in the ensuing confrontation. The deaths have once more ignited calls for Kadhimi to resign. He is walking a tightrope, trying to balance the interests of Iran and the United States, in a country plagued by foreign meddling. He knows that a single vote of confidence in Iraq’s Majilis could end his career and there are dozens of Iraqi MPs who owe their allegiance to Tehran and may yet be ordered to vote that way.