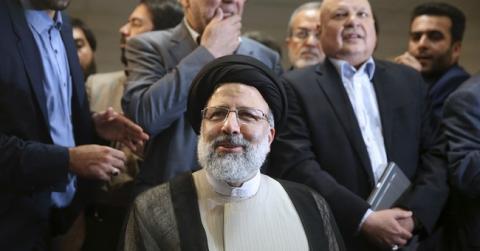 IRAN IS THE WORLD’S TOP EXECUTIONER

As the leading executioner per capita in the world, it is perhaps appropriate that a notorious killer, known as ‘The Butcher of Tehran’, has ascended to the presidency. Following his rigged election, Ebrahim Raisi was inaugurated as president on 5th August. Listed as an international terrorist in the USA, Amnesty International and Human Rights Watch have called for his indictment for violations of human rights and crimes against humanity. He has boasted of his role as a member of the ‘Death Commission’ appointed by the then Supreme Leader Ayatollah Khomeini in 1988, which oversaw the  massacre of more than 30,000 political prisoners, mostly supporters of the Mojahedin e-Khalq (MEK)/People’s Mojahedin of Iran (PMOI) opposition movement. For his work as a ruthless executioner, Raisi was promoted to the position of Tehran Prosecutor in 1989, where he earned his ‘butcher’ sobriquet. He held that position for five years. In 2012 he became Deputy Head of the Judiciary. Raisi became head of Iran’s  Judiciary in March 2019.  Since then, he has directed the execution of 251 people in 2019, and 267 people in 2020, and scores of executions in 2021.

Three prisoners were hanged on the eve of Raisi’s inauguration, bringing to at least 22, the number of prisoners executed since July 23. From June 19, when the fake elections installed Raisi as the regime’s new president, and Gholam-Hossein Mohseni-Eje’i replaced him as the new Judiciary Chief, at least 62 prisoners have been executed. The intensification of executions, particularly of political prisoners and opponents of the theocratic regime, is a favourite tool of repression used by the mullahs to frighten the population into submission. But ongoing mass uprisings in Khuzestan Province, where water shortages have caused a crisis and protesters have been gunned down by the Islamic Revolutionary Guards Corps, the regime’s Gestapo, have sparked huge street demonstrations in towns and cities across Iran, in solidarity with their Khuzestan cousins. Clearly the people have lost their fear of this repressive regime and are determined to see it overthrown.

It was an utter disgrace that some Western nations sent senior representatives to Tehran to attend Raisi’s inauguration. The mullahs trumpeted that the ceremony was attended by 10 presidents, 20 speakers of parliament, 11 foreign ministers, 10 other ministers, envoys of presidents, vice presidents and parliamentary delegations. The heads and officials of 11 international and regional organizations also attended, as did the representative of the UN Secretary-General, the President of OPEC and officials from the Inter-Parliamentary Union (IPU), the European Union, the Eurasian Economic Union, the Parliamentary Union of the OIC Member States, the Economic Cooperation Organization (ECO) and the D-8 Organization for Economic Cooperation. Such a cringing act of appeasement to a regime that continues to finance proxy wars across the Middle East, sponsors terrorism internationally and has become a pariah state, is simply unacceptable.

The ceremony took place less than a week after a British and a Romanian national were killed in an Iranian drone strike on an Israel-operated oil tanker in the Arabian sea. In February this year, Assadollah Assadi, an accredited Iranian diplomat, was sentenced to 20 years jail in a Belgian court, after he was caught red-handed in a terrorist bomb plot. Assadi flew to Vienna from Tehran in a commercial airliner, with a fully primed bomb in his diplomatic pouch. He and his co-conspirators had planned to kill leading European and international political figures at an Iranian opposition rally in Paris. His murderous plot must have been condoned by the clerical regime’s leadership. Assadi’s jailing followed the expulsion of the Iranian Ambassador and First Secretary from Albania, for plotting to bomb an MEK/PMOI gathering.

Repeated intelligence briefings have exposed how the mullahs have accelerated their race to build a nuclear weapon, enriching uranium to 60% purity, a hair’s breadth away from weapons grade, while building ballistic missiles capable of reaching Tel Aviv. The theocratic regime’s estimated $16 billion support for Bashar al-Assad’s bloody civil war in Syria, their provision of money and arms to the Houthi rebels in Yemen, their sponsorship of the brutal Shi’ia militias in Iraq, the terrorist Hezbollah in Lebanon and Hamas in Gaza, should all have provided Western nations with pause for thought before accepting invitations to attend Raisi’s inauguration. But after each Iranian outrage there is an ominous silence from the West. The EU made no comment following the jailing of the Iranian diplomat and when criticized for failing to condemn a state-sponsored plot to kill and maim European citizens, lamely replied that they could not comment on the court proceedings of individual EU Member States. Such kow-towing acquiescence has simply emboldened the mullahs to further aggression abroad and repression at home.

It is surely unthinkable that the West should waste any further energy on trying to resurrect the defunct Joint Comprehensive Plan of Action (JCPOA) nuclear deal? Talks in Vienna have stalled at Iran’s insistence that all sanctions imposed by former president Donald Trump under his ‘maximum pressure’ campaign must be lifted before any negotiations can take place. The deal was a failure from the outset and never stopped the mullahs’ efforts to build a nuclear bomb. Lifting sanctions would simply re-energize the corrupt regime, re-invigorating their sponsorship of proxy wars and international terrorism.

With protesters chanting “Death to the Dictator” and “Mullahs must get lost”, the time has come for appeasement to end and for Western nations to demand the indictment and prosecution of Ebrahim Raisi and the other mass murderers who have ruled Iran for the past 4 decades. Turning a blind eye to the brutal suppression and escalating death toll in Iran simply provides impunity to this criminal regime, encouraging them to slaughter more people.