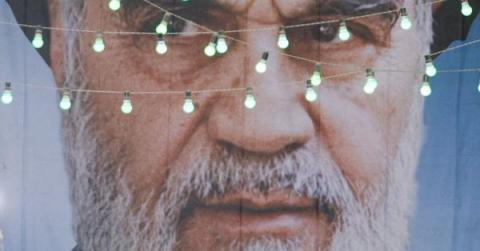 A major ceremony organised by the terrorist Islamic Revolutionary Guards Corps, the Iranian regime’s Gestapo,  will be held in Tehran  from 13-15 June, to commemorate the founder of the Islamic Revolution, Ayatollah Khomeini. Crowds will be herded into the Khomeini mausoleum in southern Tehran to pay tribute to the Islamic Republic’s first Supreme Leader, who died thirty years ago, on 3rdJune, 1989. Amid orchestrated cries of “Death to America” the current Supreme Leader, Ali Khamenei, will address the throng.

Those attending this gala propaganda event will have more to mourn than the passing of Ayatollah Khomeini. They can weep also for the complete destruction of their once prosperous country by the theocratic dictatorship that seized power in the 1979 revolution. Four decades of rampant corruption, medieval brutality, unchecked abuse of human rights and women’s rights, together with the country’s emergence as an international pariah, have left 80 million Iranians angry, frustrated and demanding regime change.

The overthrow of the Shah in the 1979 revolution was hailed by the Iranian people as a deliverance from cruel oppression, although it took the West by surprise. At the time, the Shah had the largest, most powerful and best‐equipped army in the region.The rise in the price of oil had improved the quality of life for many Iranians. However, the West,including the U.S. failed to grasp two major issues, despite their extensive presence in Iranat the time. First, there was a lack of freedom in a country whose people were dying for it;and second, a large proportion of the Iranian population was still suffering from poverty. The gulf between rich and poor had widened.

The situation today is very different from that of 1979. The US withdrawal from Obama’s failed nuclear deal and the re-imposition of sanctions have devastated the Iranian economy. The economic poverty and lack of freedom that led to the Shah’s overthrow exist today on a much larger scale, almost incomparable to 1979. Unemployment and poverty levels have spiraled in Iran, inflation has reached record levels, the Real has collapsed and strikes and protests have continued in towns and cities throughout the country for the past 17 months. The number of people living under the poverty line has escalated. The middle class has vanished. People have even been compelled to sell their kidneys and retinas to get cash to feed their families. There are thousands of drug addicts, some as young as 15. Child labour and homelessness are rampant.

Yet, the mullahs live a life of luxury and spend billions of euros supporting Bashar al-Assad’s brutal civil war in Syria and on funding Hezbollah and other terrorist groups like the vicious Shi’ia militias in Iraq and the Houthi rebels in Yemen, although the signs are that the American sanctions have reduced this sponsorship of terror and proxy wars to a trickle. Slogans heard during the street protests such as “forget Syria and think about us” and “Not Lebanon, not Gaza; I will sacrifice my life for Iran” reflect a deep division between the people of Iran and the ruling regime.

When Ayatollah Ruhollah Khomeini returned to Iran in triumph on 1stFebruary 1979, after the Shah had fled, he was welcomed by an estimated crowd of up to five-million people. Like most observers in the West, the Iranian people believed that this elderly, bearded, holy man, would restore peace, stability and prosperity to their nation. How wrong they were. Little did they realise that Khomeini was a psychopathic murderer intent on plunging their country into a fundamentalist cauldron, exterminating anyone who stood in his way. His corrupt system of velāyat-e faqih, or guardianship of the Islamic jurist, gave him the power to rule as Supreme Leader, taking his orders, he claimed, directly from God. He exploited this power with ruthless force.

The UN now has irrefutable evidence of the summary execution of more than 30,000 supporters of the People’s Mojahedin of Iran /Mojahedin e-Khalq (PMOI/MEK) by the Iranian regime in the summer of 1988.  It was an atrocity that must rank as a crime against humanity and one of the most horrific mass murders of the late twentieth century. The mass executions, in jails across Iran, were carried out on the basis of a fatwa by Ayatollah Ruhollah Khomeini. A ‘Death Committee’ of four senior officials approved all the executions. In a tape recording of one of the Death Committee meetings, Khomeini’s nominated successor, Grand Ayatollah Montaseri, can be heard protesting that political prisoners, including women and even teenagers, were being hanged simply for supporting the PMOI/MEK opposition movement. Khomeini instructed that the executions should be carried out in haste and that even pregnant women should not be spared. Because he had dared to complain, Montaseri was removed as Khomeini’s successor and detained under house arrest for the rest of his life.

Unbelievably, Mostafa Pour-Mohammadi, a member of that ‘Death Committee’, was until mid-2017 President Hassan Rouhani’s Justice Minister! When his part in the murders became known publicly, he was replaced by Alireza Avaie, who himself was a prominent executioner during the 1988 massacre, in his role as Chief Prosecutor in the city of Dezful. Avaie has been on the EU’s terrorist blacklist for years. Other members of the 1988 Death Committee also still hold prominent positions in Iran. President Hassan Rouhani himself must have been well aware of the massacre as he was deputy head of the Iranian military at the time.

Monstrous acts of butchery like this have become grisly milestones in the history of oppression and tyranny in contemporary Iran and even the death of Khomeini brought no respite. His successor, Ayatollah Ali Khamenei, has presided over a regime that now executes more people per capita than any other country in the world. Iran has become, in the words of US Secretary of State Mike Pompeo, the Godfather of terror, an international sponsor of terrorism.

So as the crowds file into Khomeini’s mausoleum under the watchful eyes of the gun-toting IRGC, they may pause to reflect how the so-called ‘holy man’ whom they thought could be their savior, turned out to be a psychotic butcher, who twisted and distorted Islam to justify his murderous reign of terror.