THE CORRUPTION OF JUSTICE IN IRAN WILL NOT GO UNPUNISHED 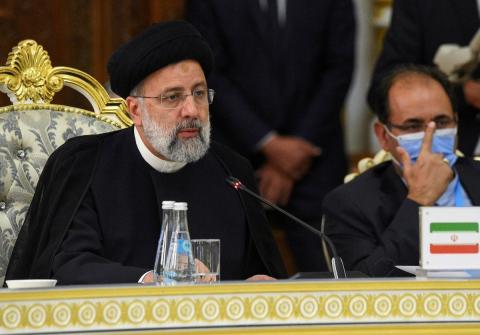 THE CORRUPTION OF JUSTICE IN IRAN

The sentence of 8 years imprisonment and 70 lashes, handed down to human rights activist Narges Mohammadi, following a perfunctory 5- minute trial in Tehran, marks a further disgraceful chapter in the shameful history of the theocratic Iranian regime. Narges Mohammadi is vice-president of the Defenders of Human Rights Centre, led by the Nobel prize-winner Shirin Ebadi. News of her sentence was released on Twitter by her husband Taghi Rahmani, who lives in exile in France. Details of the charges and verdict against the courageous Mohammadi are unknown, but she has been arrested several times in recent years. She was released from prison in October 2020 following a 5-year prison sentence. She was sentenced again in May 2021 to 30 months jail and 80 lashes, for “propaganda against the Iranian political system” and “defamation and rebellion” against the prison authority.

Narges Mohammadi’s most recent conviction is simply the latest in a long line of similar corruptions of justice in Iran. Earlier this month Fariba Adelkhah, a Franco-Iranian researcher, was returned to the notorious Evin Prison in Tehran, accused of violating the rules of her house arrest. Adelkhah was originally arrested in June 2019, along with Roland Marchal. Both were academics carrying out research for Sciences Po, France’s leading university on the social sciences. Fariba Adelkhah was initially charged with espionage, punishable by the death penalty, and with "propaganda against the political system of the Islamic Republic" and "collusion to endanger national security". The espionage charge was dropped on 6 January 2020.

Roland Marchal was falsely charged with "collusion to endanger national security". He was freed in exchange for the release of an Iranian engineer detained in France and allowed to return to Europe in March 2020. The Iranian authorities have always refused to recognise dual nationality, so, unlike Roland Marchal, Fariba Adelkhah was not allowed to receive the services of any French consular officials. She went on a prolonged 49-day hunger strike in protest at her unjust arrest and sentence, severely damaging her kidneys and ending up in the Evin Prison hospital. Her re-incarceration will pose a serious risk to her health. Earlier this month the Iranian poet, filmmaker and dissident Baktash Abtin died of Covid-19. He had been released from prison on furlough after contracting the disease and died in hospital. Leading human rights organisations have accused the Iranian regime of being directly responsible for his death.

The mullahs’ perverted justice system treats dual nationals who venture into Iran as model hostages, ideal for blackmailing the West. This has certainly been behind the on-going case of Nazanin Zagari-Ratcliffe, the young British mother. Nazanin was arrested in 2016 while on holiday from the UK with her daughter whom she had brought to Tehran to visit her parents. She was falsely accused of “plotting to topple the Iranian government” and sentenced to 5-years in prison. Her sentence ended in March 2021, but one month later she was re-arrested and charged with instigating propaganda activities against the government. She was sentenced to a further year in jail. Nazanin is currently under house arrest. The mullahs are demanding the repayment of £600 million ($815m) paid by the Shah of Iran to the UK for military equipment prior to the 1979 revolution. The equipment was never delivered and Nazanin’s callous mistreatment appears to be directly linked to this case.

It is believed that at least 30 dual and foreign nationals are currently imprisoned in Iran. Their arrests are always followed by a pattern of prolonged solitary confinement and interrogation, against a background of denial of due process, denial of consular access or visits from UN or humanitarian organisations, secretive trials in which the detainee is given limited or often no access to counsel and long prison sentences based on vague or unspecified “national security” and “espionage” charges. The gangster clerical regime has become expert at blackmail, extortion and the protection racket.

But none of this should come as a surprise to the West. For years we have watched in horror as the mullahs have accelerated their ballistic missile and nuclear weapons programmes and squandered billions on proxy wars in the Middle East, supporting Bashar al-Assad in Syria, terrorist groups like Hezbollah in Lebanon, the Houthi rebels in Yemen, the violent Shi’ia militias in Iraq and Hamas in Gaza. Now with the sham election as president of Ebrahim Raisi, Iran’s position as the world’s most repressive and criminal regime has been compounded. Raisi is known as ‘The Butcher of Tehran’ for his key role in the massacre of over 30,000 political prisoners in 1988 and, when he was head of the judiciary, for ordering the killing of over 1,500 mostly young protesters, during a nationwide uprising in Iran in November 2019.

Last week 460 international human rights and legal experts, including a former head of the International Criminal Court (ICC), plus more than a hundred current and former UN officials, told the UN Human Rights Council that Iran's 1988 prison massacre may amount to "crimes against humanity" even "genocide". This is explosive news as perpetrators of those crimes, like Raisi, occupy today the highest executive and judiciary posts in the country. In his report to the UN General Assembly last summer, Professor Javaid Rehman, the UN special rapporteur on human rights in Iran, raised concerns regarding the destruction of evidence of the extrajudicial executions that took place in 1988. In August this year, the UN Working Group on Enforced Disappearances in a report to the UN Human Rights Council, called for an “international investigation” into the 1988 massacre, stating that “The Working Group reiterates the concerns expressed about the ongoing concealment of burial sites across the country”. Now Agnès Callamard, the Secretary General of Amnesty International, has called for Raisi to be investigated for crimes against humanity and for his involvement in murder, enforced disappearance and torture.

If the mullahs are counting on ongoing nuclear negotiations in Vienna as a blank cheque in human rights violations, they are wrong. Crimes against humanity and genocide are not prone to be wiped off the table by political or other Issues. It is time to end such impunity.The West must send the clearest possible message to Ebrahim Raisi. His crimes will not be forgotten or forgiven. His victims and their families demand justice. He will be held to account for crimes against humanity, murder, human rights violations and genocide. The UN must launch a full investigation into these crimes and hold accountable all those involved. The outrageous jailing and flogging of brave human rights defenders like Narges Mohammadi and others, will be avenged.